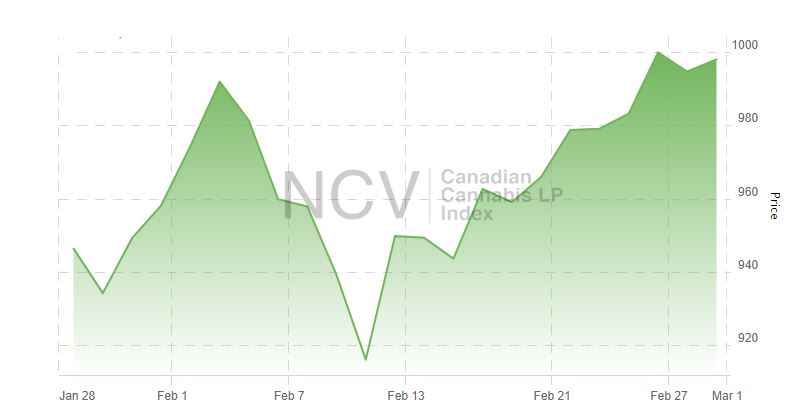 Tier 1, which included the LPs that are generating sales of at least C$10 million per quarter (in 2018, we used C$4 million as the hurdle), rose 10.0% in January, giving it a year-to-date gain of 68.4% after declining 7.7% in 2018. This group included Aphria (TSX: APHA) (NYSE: APHA), Aurora Cannabis, CannTrust (TSX: TRST) (OTC: CNTTF), Canopy Growth and Organigram (TSXV: OGI) (OTC: OGRMF) . Within the group, Aprhia and CannTrust posted gains of about 19%, while Canopy Growth was the worst performer, declining 3.2%.

Tier 3, which included the 36 LPs that generate quarterly sales less than C$2.5 million, rose 4.0%, leaving its year-to-date gain at 36.0% after declining 26.4% in 2018. The best performers in the group were Heritage Cannabis (CSE: CANN) (OTC: HERTF), MediPharm Labs (TSXV: LABS) (OTC: MLCPF) and 48North (TSXV: NRTH) (OTC: NCNNF), all of which gained more than 50%. Heritage, relatively unknown, became more visible after completing a recent capital raise, making several announcements regarding its operations and additions to its management team. MediPharm Labs announced a very large contract during the month to provide extraction services to a large LP. 48North reported strong revenue growth with positive operating cash flow in late February and also signed a supply agreement with Quebec, the first LP to do so with outdoor grown cannabis. 16 of the 17 worst performers for the month were part of Tier 3.

The returns for the overall sector varied greatly, with six names gaining more than 20%, while five declined by more than 20%: 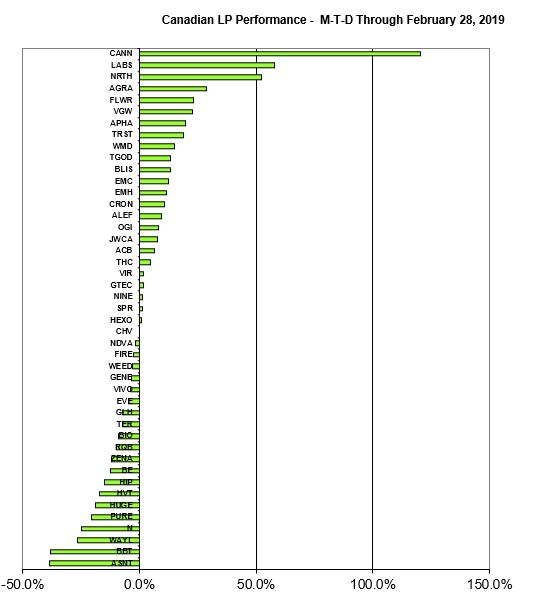 For March, the overall index had four additions, including MPX International (CSE: MPXI), Neptune Wellness Solutions (TSX: NEPT) (NASDAQ: NEPT), Radient Technologies (TSXV: RTI) (OTC: RDDTF) and Terranueva (CSE: TEQ) joining, all in Tier 3. Readers should be aware that Tilray, with no Canadian listing, is not eligible for inclusion in the index, which is denominated in Canadian dollars.