This is a copy of the August 4th edition of our weekly Newsletter, which we have been publishing since October 2015.

After months of disappointing developments in the roll-out of cannabis legalization in Canada, Aphria delivered strong revenue in its final quarter of its fiscal 2019, breaking a trend of sequential declines in sales among leading LPs. The revenue growth as well as positive forward guidance pushed the stock up 40% and inspired traders to jump into peers both in Canada and in the U.S., driving an almost 5% advance in the Global Cannabis Stock Index on Friday.

Much of the financial media played up the “profit” that Aphria reported. Bloomberg called Aphria the “first Canadian pot company to turn a profit”, which is absolutely false on two levels. First, it is true that the company reported net income of C$15.8 million, which we will explain, but Aphria’s quarter did not represent the first time a Canadian LP has reported what is technically positive earnings. In fact, Aphria most recently reported a profit just two quarters ago as well as during three of the quarters in its prior fiscal year. From its MD&A, here is the EPS history:

Clearly Bloomberg botched this one, as the reported profit in the quarter was exceeded in two prior quarters of its fiscal year. Beyond Aphria, though, several LPs have reported quarterly profits, at least technically.

We caution readers to dig in just a little to understand how the income is being generated, as we don’t consider Aphria to have been profitable during the quarter, as shown in the Public Cannabis Company Revenue Tracker. The profit can be attributed to non-operating income of C$40.2 million, as detailed in the MD&A. The main driver of this was a C$48.4 million “unrealized gain on convertible debentures”. In simple terms, the company “profited” from its stock price falling! Accounting rules for derivatives require the company to make this adjustment as the conversion becomes less likely after a price decline. If the gains from Friday hold, get ready for a big loss (which investors should disregard as well). 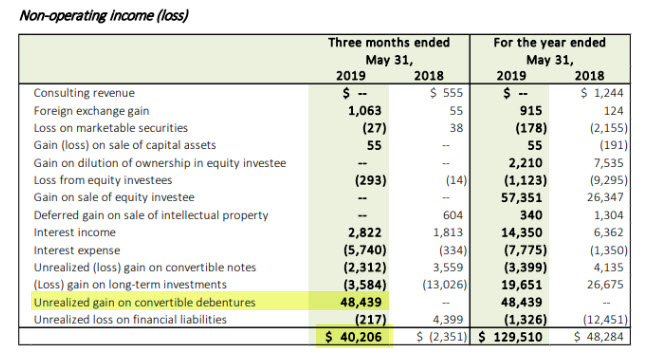 While the truth is clear in the MD&A, we fault Aphria for emphasizing its “profitability” in its press release, where it highlighted it in the sub-header. In fact, we think it was downright deceptive to not mention the real cause of the profit. The press release made no mention of the substantive impact of the convertible note, stating: “The increase in net income was primarily due to the increase in sales and the net fair value adjustment for biological assets, and decrease in the impairment expense, offset by increase in SG&A related to G&A and transaction costs.”

Aphria reported an operating loss of C$24 million, but this benefited from one-time gains on adjustments to the fair value of biological assets. Excluding those gains, as we do in the revenue tracker, the operating loss would have been almost C$32 million. To their credit, this was a great improvement from the prior quarter. In general, the loss is similar to most larger peers as a percentage of revenue.

Another metric for calculating profitability is “adjusted EBITDA”. This takes the earnings before interest, taxes, depreciation and amortization and incorporates adjustments for one-time factors. Not all companies report this metric on an equivalent basis, but we think Aphria does a good job of calculating it in a helpful manner. The main adjustments to arrive at the C$209K adjusted EBITDA were to remove the non-operating income, the gains from biological assets, C$20 million of one-time transaction costs and C$3 million of share-based compensation.

We have shared our view previously that investors are going to start to look past revenue levels and growth in 2019, with a shift of focus to profitability. We don’t think that companies need to maximize profitability at this early stage, but they do need to show that there is a path to profitability. The Canadian LPs have struggled with revenue growth lately, and many haven’t been able to show signs of better margins thus far. While we certainly question descriptions of Aphria as being profitable this quarter, we note the improvement over the prior quarter and the strong forward guidance for EBITDA margins in its fiscal 2020.

At the end of June, we suggested that the second half will likely be more favorable for the LPs than the first half of the year, and, despite the shocks the market endured in July, we stand by our outlook. As supply increases, distribution expands and new products are introduced, we expect investors will look at the Canadian LPs and retailers more optimistically. Legalization has presented many challenges thus far, but we expect better times ahead in Canada, and hopefully Aphria’s recovery from its challenges is a harbinger of better performance across the sector.

Join us at the Benzinga Cannabis Capital Conference, where investors come face-to-face with top cannabis companies to hear about their advancements in the rapidly changing space, while industry professionals discover new opportunities to grow business enterprises with lightning round presentations and 1:1 meetings. 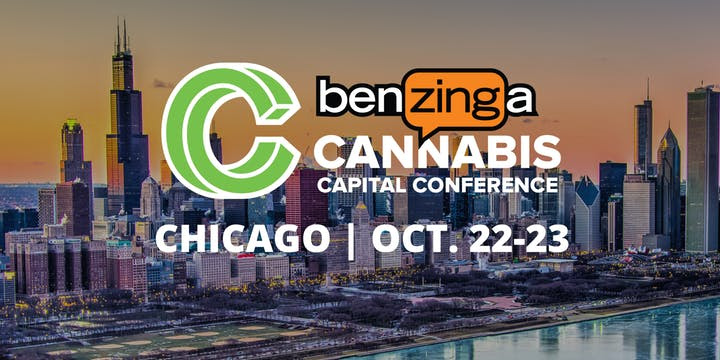 New Cannabis Ventures in partnership with Benzinga continues to deliver the premier gathering of cannabis entrepreneurs and investors in North America. No other conference offers the level of access and seamlessness of interaction between entrepreneurs building future billion-dollar cannabis enterprises and the investors whose capital will make that happen.