43 companies currently qualify for inclusion, with 27 filing in U.S dollars and 16 in the Canadian currency. Since our last report at the end of June, we have added multi-state operator C21 Investments (CSE: CXXI) (OTC: CXXIF) and Canadian LP Valens GroWorks (TSXV: VGW) (OTC: VGWCF). We expect to add more companies in the coming months. We are not able to include Elixinol Global (ASX: EXL) (OTC: ELLXF) and Greenlane (NASDAQ: GNLN), which would otherwise qualify but don’t break out their cannabis-related revenue. We also note that Scotts Miracle-Gro (NYSE:SMG) derives substantial cannabis-related revenue through its Hawthorne Gardening operations, but we are unsure of the exact amount and, thus, aren’t including it at this time.

In May, we began to include an additional item, “Adjusting Operating Income”, as we detailed in our newsletter. The calculation takes the reported operating income and adjusts it for any changes in the fair value of biological assets required under IFRS accounting. We believe that this adjustment improves comparability for the companies across IFRS and GAAP accounting. We note that often operating income can include one-time items like stock compensation, inventory write-downs or public listing expenses, and we recommend that readers understand how these non-cash items can impact quarterly financials.

In July, there were two financial reports from companies that report in American dollars, including KushCo Holdings (OTC: KSHB) and C21 Investments. KushCo, which had been expected to generate Fy19-Q3 sales of $40.4 million, reported revenue of $41.5 million and increased its guidance for the fiscal year ending August 31 to $145-150 million from the prior range of $140-150 million. C21 Investments joined the list with quarterly sales of $7.8 million for the quarter ended April 30th in the Nevada and Oregon markets. 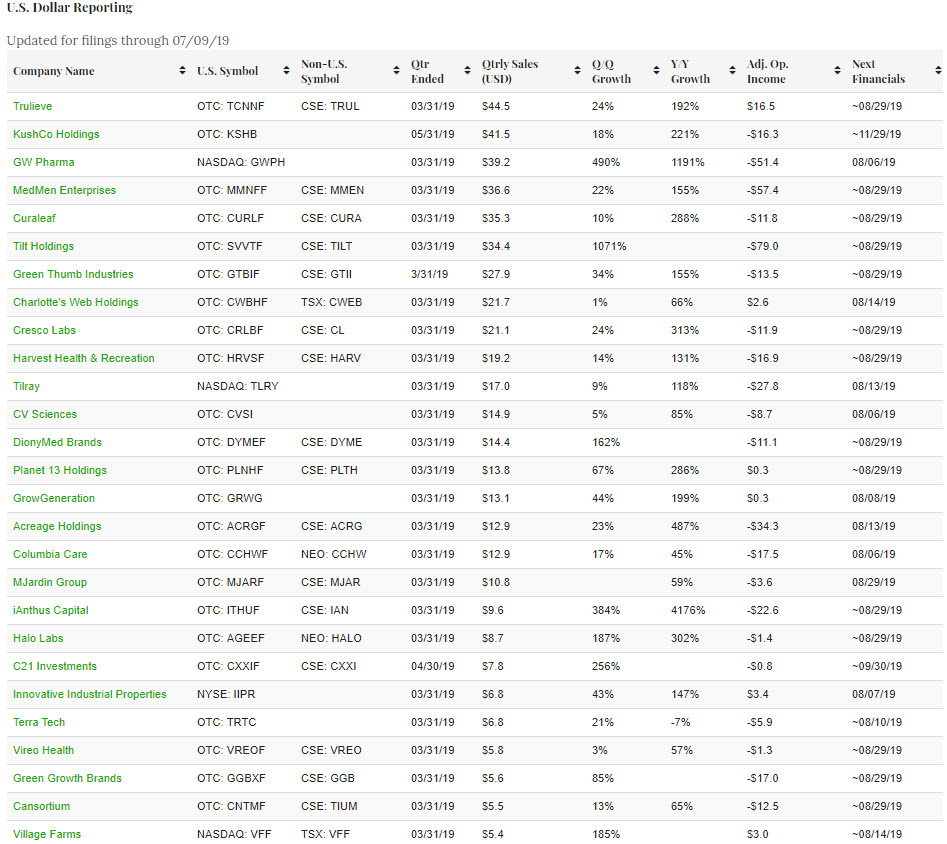 In August, almost every company we rank will be reporting, and we will provide an update mid-month and after the month ends. Among the companies reporting in the first half of August, GW Pharma (NASDAQ: GWPH), Columbia Care (NEO: CCHW) (OTC: CCHWF) and CV Sciences (OTC: CVSI) report on the 6th, Innovative Industrial Properties (NYSE: IIPR) reports on the 7th, GrowGeneration (OTC: GRWG) reports on the 8th, Acreage Holdings (CSE: ACRG.U) (OTC: ACRGF and Tilray (NASDAQ: TLRY) report on the 13th, and Charlotte’s Web (TSX: CWEB) (OTC: CWBHF) reports on the 14th. According to Sentieo, GW Pharma revenue is expected to expand to $47 million,  Charlotte’s Web sales are expected to be about $27.5 million, and analysts project Tilray sales at $41 million, tough this includes a substantial amount of hemp-food revenue.

Of the companies that report in Canadian dollars, Organigram (TSXV: OGI) (NASDAQ: OGI) fiscal Q3 sales fell short of expectations at C$24.8 million, declining 8% from the prior quarter due to ordering patterns by its provincial customers. The company posted an adjusted operating income of C$1.2 million. National Access Cannabis (TSXV: META) (OTC: NACNF) grew revenue slightly from its fiscal Q2, with Q3 sales for the quarter ending 5/31 topping C$17 million. The vast majority were from the sale of cannabis and cannabis accessories, with a small amount generated by its clinic operations. 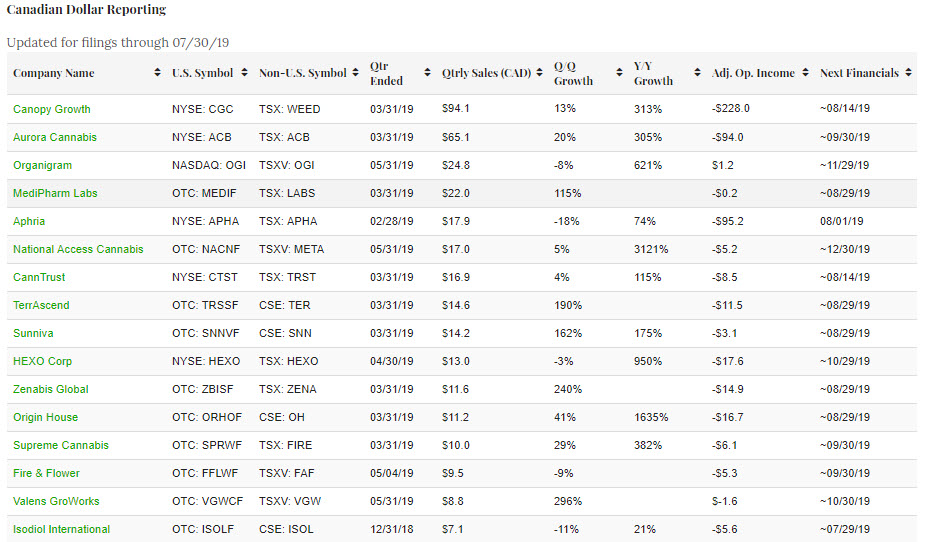 In August, we will see several filings, with a few in the first half, including Aphria (TSX: APHA) (NYSE: APHA) reporting on August 1st and Canopy Growth (TSX: WEED) (NYSE: CGC) reporting on August 14th (with a call the next morning). Sentieo consensus for the company suggests FY20-Q1 revenue will increase 16% from Q4 to C$109 million. EPS are expected to be -C$0.38. CannTrust (TSX: TRST) (NYSE: CTST) is also expected to file financials by the 14th.  Isodiol International ( CSE: ISOL) (OTC: ISOLF) is delinquent in reporting its financials for the quarter and year ending March 31.