This is a copy of the December 16th edition of our weekly Newsletter, which we have been publishing since October 2015.

Despite some tremendous political headwinds early in the year, American cannabis companies are thriving on the promise of a better, or at least benign, political environment. The industry is cranking out substantial revenue, and this is now showing up in the financial statements of the several multi-state operators (MSOs) that have been able to access capital markets and go public this year. The New Cannabis Ventures Public Company Revenue Tracker has two dozen companies reporting financials in U.S. dollars that reported quarterly revenue in excess of $2.5 million last quarter, and all but one of these are focused on the U.S. Of these 23 companies, 13 began trading publicly this year.

The transition of the leading cannabis companies from the private to the public markets is a process that remains ongoing. The flood of CSE listings since late May has been exciting for those who have been watching the markets develop over the last several years, but it has also pressured the sector to a great degree this fall. In order to better track the performance of MSOs, which continue to grow at a rapid pace, New Cannabis Ventures introduced the American Cannabis Operators Index at the end of October, and, forty-five days later, it has lost 16.5%. During the same time, the Canadian Cannabis LP Index has lost even more, dropping 23.0%.

Investors who have bought just in advance of the MSOs going public since Labor Day have suffered tremendous losses, with only a few exceptions, including Charlotte’s Web, Green Growth Brands, Plus Products and Trulieve, which have managed to rally. Otherwise, the declines have been quite substantial. Here is the list of newly public American cannabis companies since late May, listed in order of their trading debut: 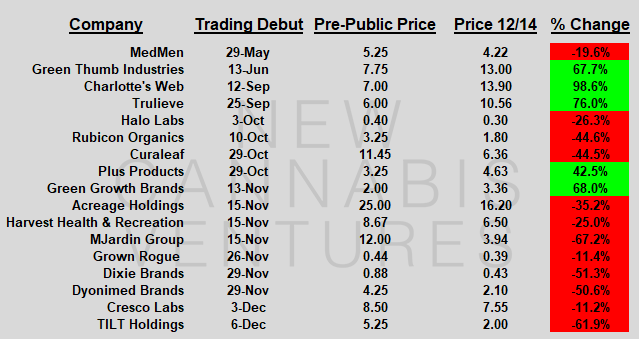 Having watched the capital raising cycle for the Canadian LPs over the past several years, we are confident that the prices of many of these leading MSOs will stabilize and likely advance as the strongest companies continue to grow and as the supply of new issues abates. We recall that the early Canadian LPs endured a very rough 12-18 months in the 2014-2015 time-frame as early investors cashed out. The American MSOs have much more substantial businesses than the Canadian LPs did in the early days, and we think this will lead to a much shorter period of pressure on new issues than the market experienced back then. So, while the “flood” has left a lot of investors under water, we expect that in early 2019 many will seize upon what looks like a great potential buying opportunity.

After the tremendous success of the first Cannabis Capital Conference in Toronto this summer, we are excited to be working with Benzinga again for its next event that is designed for North American cannabis investors and entrepreneurs, which will take place next month in sunny Miami Beach.

Get your ticket and be sure to use code “420ALAN”