The American Cannabis Operator Index moved higher for the fourth consecutive month in January, advancing 23.3% to 77.74: 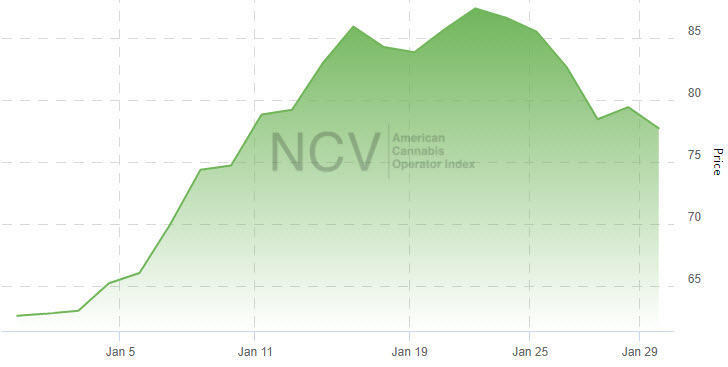 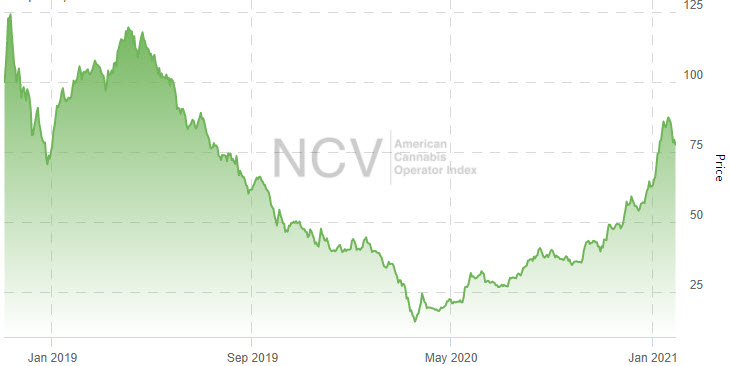 During January, the index included 25 companies, including 22 multi-state operators (MSOs) and 3 focused solely on CBD extracted from industrial hemp. Four companies posted returns in excess of 40%, while four declined during the month: 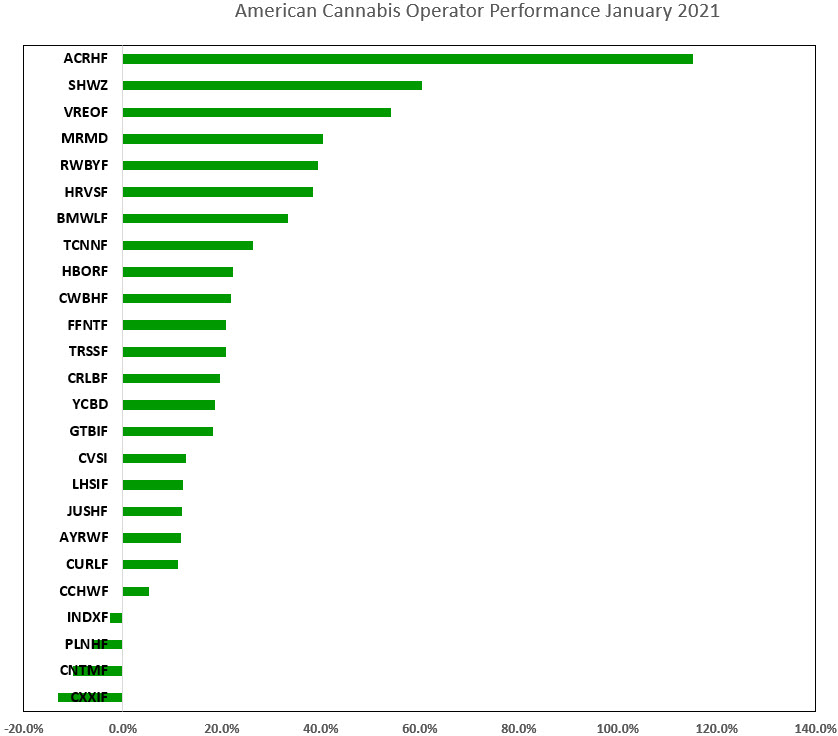 The four best performing stocks in January included Acreage Holdings (CSE: ACRG.A) (OTC: ACRHF), Schwazze (OTC: SHWZ), Vireo Health (CSE: VREO) (OTC: VREOF) and MariMed (OTC: MRMD). With the exception of Vireo Health, these were all poor performers in December and in 2020, so there was a bit of bottom-fishing perhaps. Acreage Holdings rallied on the strength of its potential merger partner, Canopy Growth, as well as perceived higher odds that the transaction could take place sooner given the change in control of the Senate. Schwazze, which declined 44% in 2020 when it failed to close several pending acquisitions, jumped late in the month. Vireo Health, a big winner in 2020, gained after New York, where it is one of ten license-holders, introduced legislation that would legalize adult-use sales. MariMed, which lost 24% in 2020, extended its gains from a late November rally.

The four worst performing stocks included C21 Investments (CSE: CXXI) (OTC: CXXIF), Cansortium (CSE: TIUM.U) (OTC: CNTMF), Planet 13 Holdings (CSE: PLTH) (CSE: PLNHF) and Indus Holdings (CSE: INDS) (OTC: INDXF). C21 Investments pulled back after a 42% rally in December. The company, which jumped in late November after it restructured its debt after receiving commitments from Wasatch Global, JW Asset Management and CB1 Capital, divested its Oregon operations during the month. Cansortium sagged after Cresco Labs announced its pending acquisition of Bluma Wellness. It had jumped late in the year following the announcement of the pending Ayr Strategies acquisition of Liberty Health, and investors seem to have lowered their expectations of the company being acquired by a larger MSO. Planet 13 Holdings, a big winner in 2020, digested gains as it raised capital for the fourth time since last summer during the month. Indus Holdings, which has been consolidating since a capital raise in December, announced in January that it intends to construct a purpose-built cultivation and processing facility in California rather than to proceed with a retrofit project.