This is a copy of the June 30th edition of our weekly Newsletter, which we have been publishing since October 2015.

Monday is Canada Day, and we want to not only wish all of our Canadian readers a happy holiday but also to share our perspective over how the rest of the year may play out for its cannabis industry. It was just over a year ago that the Cannabis Act received Royal Assent, with legalization being implemented in October. The industry has struggled to meet expectations, as many LPs have not yet scaled up cannabis production and distribution remains quite limited, especially in Ontario. Consequently, the stocks of LPs and retailers have been struggling since the run-up in September ahead of legalization, with the Canadian Cannabis LP Index ending June 32% below the all-time high of 1314.33 in September:

Sales have fallen short of predictions, and we have even seen several retailers and LPs report sequential declines in quarterly revenue for a variety of reasons. While the overall market has gained from depressed end of year levels, we note that several LPs have been posting 52-week lows, and we think the market is beginning to recognize that many of the 186 licenses issued by Health Canada to date may not be viable. On the HEXO Corp Q3 conference call, CEO Sebastien St-Louis detailed his perspective on the situation, suggesting that 80% of LPs will go bankrupt. While this is likely an extreme view, we think that Sebastien is right to expect that the outlook will be challenging for many LPs, especially those that aren’t well capitalized.

New Cannabis Ventures breaks down the LPs into tiers, and it’s pretty clear that investors have favored larger LPs that are scaling up. Through June, the year-to-date returns for Tier 1 and Tier 2 were 42% and 41%, respectively, while Tier 3, which are the LPs not generating at least C$2.5 million in quarterly cannabis sales, has increased just 23%. 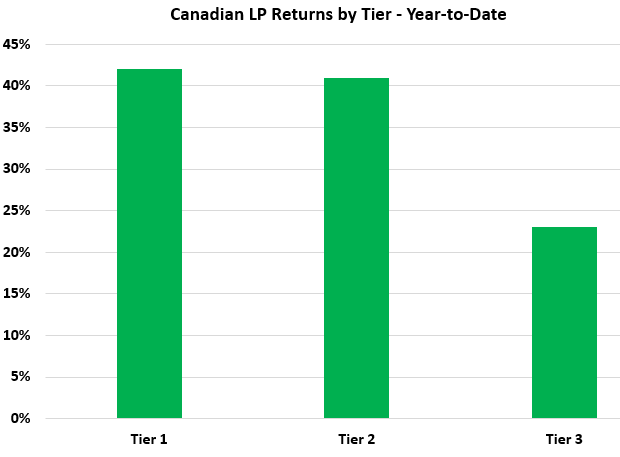 From a different perspective, Tier 1 and Tier 2 have declined 26% and 19%, respectively, since the end of September, while Tier 3 has lost 32% since then.

Looking ahead, we think that there is reason for optimism. First, supply is ramping up. Not only will this help improve the customer experience, as securing regular supply has been challenging, but, more importantly, it will allow the provinces to be more aggressive on allowing retail store openings. Already Alberta has begun the process of adding stores, but the more important change will be when Ontario does so. At present, the largest province, with a population of over 14 million, has just 25 dispensaries, when the market could easily support 1000. Second, the introduction of new form factors will dramatically expand sales in 2020. These products, which will hit the shelves beginning in December, include edibles, vape pens and extracts.

Our enthusiasm is tempered somewhat by what we view as a major challenge to the edibles market, with a 10mg THC cap per package, which will push the price points to likely C$6 or so for a serving. One other issue that concerns us is the federal elections later this year, as a loss by Liberals may be seen as a risk to the growth of the cannabis market in Canada.

However one feels about the prospects for Canadian LPs and retailers, one should be aware that picking the right stock has become increasingly important, as the stocks clearly don’t all trade in unison. Of the 41 LPs that were in the index at the beginning of the year as well as at the end of June, 17, or almost half, have declined despite an average return of 25% and a median return of 20%.

Fire and Flower is new adult-use cannabis retail company focused exclusively on a regulated retail, often called “cannabis 2.0” in Canada. With a independent focus, the company’s goal is to establish the most recognizable and successful brand of independent cannabis retail stores. Since cannabis consumers generally do not have preferences to existing cannabis products yet, a significant opportunity exists for Fire and Flower to own the relationship with the consumer. This means that the retail brand can be of greater importance to the consumer than the product brand. 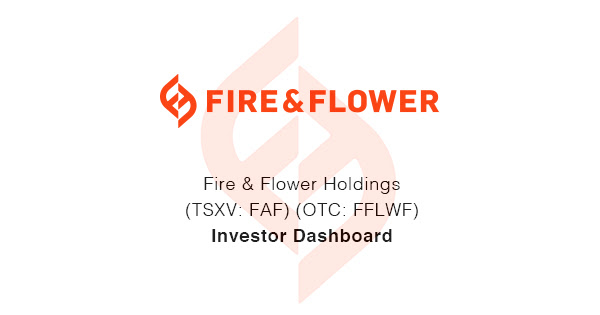 To learn more about Fire & Flower Holdings, a client of New Cannabis Ventures, visit the company’s Investor Dashboard that we maintain on its behalf and click the blue Follow Company button in order to stay up to date with their progress.

Curaleaf Prepares for New Opportunities in American and European Cannabis