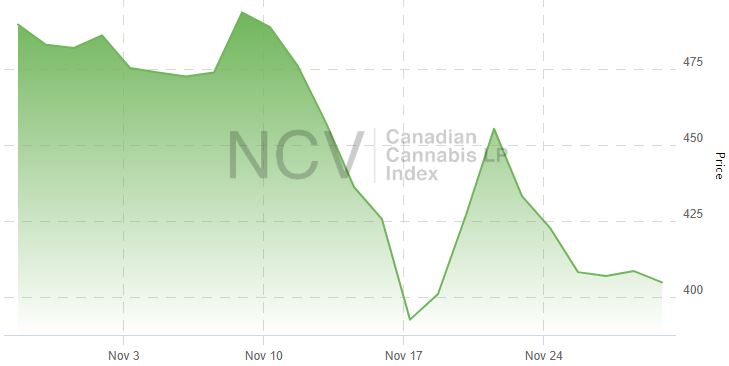 The index remains substantially below the all-time closing high of 1314.33 on September 25th a year ago, just ahead of Canadian legalization. It closed the month near its new 52-week low set on November 18th at 392.73, a level not seen since late 2017, and ended the month down 42.5% year-to-date: Tier 2, which included the LPs that generate cannabis-related quarterly sales between C$2.5 million and C$10 million, fell 25.0%%, leaving it down 45.1% so far in 2019 after declining 35.0% in 2018.  This group included Delta 9 (TSXV: DN) (OTC: VNRDF), Emerald Health (TSXV: EMH) (OTC: EMHTF) TerrAscend (CSE: TER) (OTC: TRSSF), VIVO Cannabis (TSXV: VIVO) (OTC: VVCIF), WeedMD (TSXV: WMD) (OTC: WDDMF) and  Zenabis Global (TSX: ZENA) (OTC: ZBISF). Zenabis, which conducted a rights offering at a massive discount to its share price, fell a stunning 75.3%, with Emerald Health, which has a dispute with its greenhouse JV, Pure Sunfarms, the second worst performer at -37.7%. Emerald Health, embroiled in a dispute with its JV partner at Pure Sunfarms, lost 48.1%, while Zenabis, last month’s worst performer among Tier 2 names, posted the best return by losing 8.5% after it completed its rights offering.

The returns for the overall sector varied greatly, with  9 names posting positive returns, while 15 declined by more than 25%, for a median return of -15.1%: 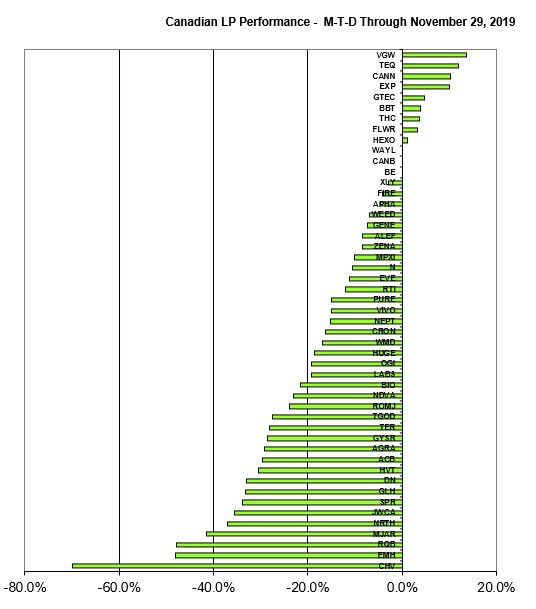 For December, the overall index will have 52 constituents, as we have added Rapid Dose Therapeutics (CSE: DOSE) (OTC: RDTCF), RMMI Corp (CSE: RMMI) and SugarBud Craft Growers (TSXV: SUGR) (OTC: RLLRF), all of which are par of the Tier 3 index as well. Readers should be aware that Sundial Growers (NASDAQ: SNDL) and Tilray (NASDAQ: TLRY), with no Canadian listings, are not eligible for inclusion in the index, which is denominated in Canadian dollars. Note that the cut-off date for making changes to the index was 11/27.

In the next monthly review, we will summarize the performance for December and discuss any additions or deletions. We are expecting to reduce the number of companies that qualify for inclusion in the index and will share the updated rules then as well. Be sure to bookmark the pages to stay current on LP stock price movements within the day or from day-to-day.