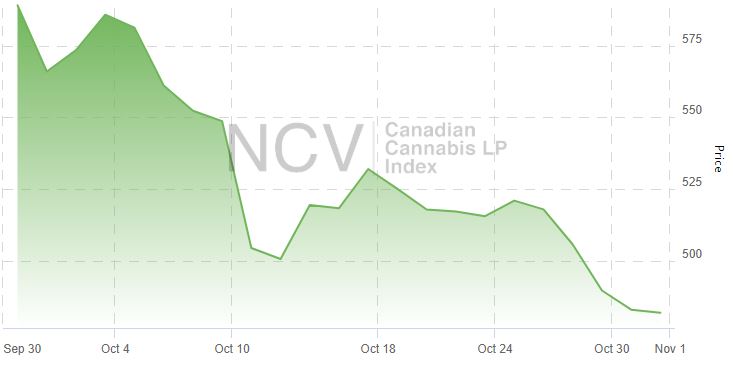 The index remains substantially below the all-time closing high of 1314.33 on September 25th a year ago, just ahead of Canadian legalization. It closed the month at a new 52-week low, a level not seen since late 2017, and ended the month down 31.6% year-to-date:

Tier 3, which included the 34 LPs that generate cannabis-related quarterly sales less than C$2.5 million, declined 17.4%, leaving its year-to-date loss at 32.0% after declining 26.4% in 2018. 3 of the 4 companies in the entire sector that showed gains in the month were members of Tier 3 during October as 3 of the 5 worst performers. The winners included AgraFlora Organics (CSE: AGRA) (OTC: AGFAF), MPX International (CSE: MPXI) (OTC: MPXOF), which saw purchases of its stock by its CEO and another executive, and Indiva (TSXV: NDVA) (OTC: NDVA), which was able to find debt financing during the month. FSD Pharma (CSE: HUGE) (OTC: FSSDF), which conducted a 201:1 reverse-split, Green Organic Dutchman (TSX: TGOD) (OTC: TGODF), which curtailed its expansion plans when it was unable to raise debt financing, and Terranueva (CSE: TEQ) all declined more than 46%.

The returns for the overall sector varied greatly, with  4 names posting positive returns, while 15 declined by more than 25%, for a median return of -16.6%: 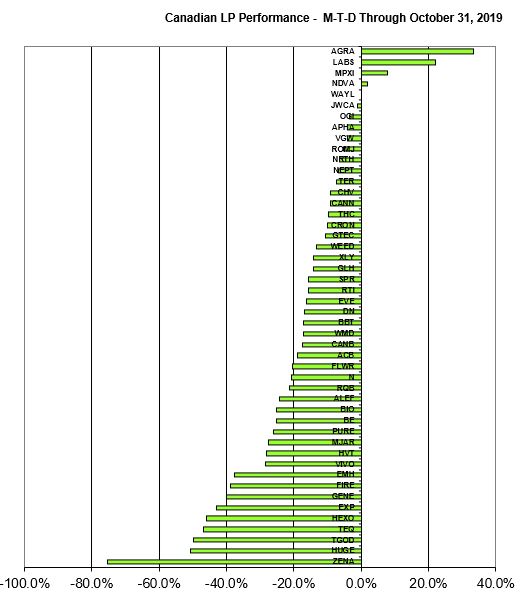 For November, the overall index will have 49 constituents, as we have added a previously omitted company, Geyser Brands (TSXV: GYSR) (OTC: GYSRF), which owns a relatively small LP that was licensed in late 2018, Apothecary Botanicals. It enters the Tier 3 index as well. Additionally, Valens GroWorks has moved from Tier 2 to Tier 1. Readers should be aware that Sundial Growers (NASDAQ: SNDL) and Tilray (NASDAQ: TLRY), with no Canadian listings, are not eligible for inclusion in the index, which is denominated in Canadian dollars. Note that the cut-off date for making changes to the index was 10/29.