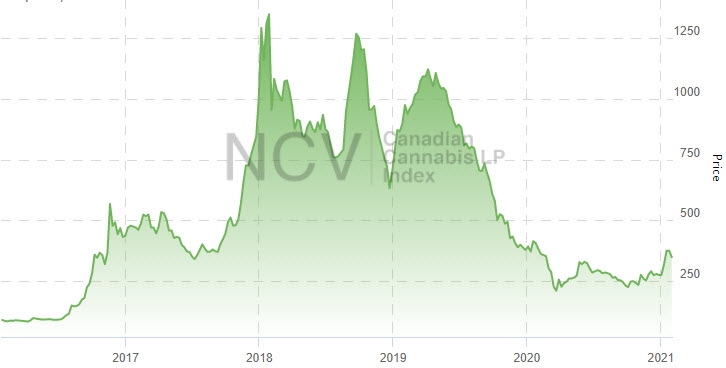 Tier 1, which included the LPs that are generating cannabis-related sales of at least C$25 million per quarter, soared 62% to 792.14, extending its gains since the U.S. elections in November. Tier 1 dropped 23.9% in 2020, ending the year at 488.96. We have increased the minimum revenue required to be included over time. At the beginning of 2021, we raised it from C$20 million. During 2019 and the first half of 2020, companies needed to generate revenue in excess of C$10 million for inclusion. In 2018, we used C$4 million as the hurdle.

Among these largest LPs by revenue, Aurora Cannabis was the worst performer, gaining 33.8%. Aphria performed the best, rising 76.7%.

The worst performer was Delta 9, which declined almost 8%, while Zenabis, up 119%, was the best performer.

Tier 3, which included the 20 qualifying LPs that generate cannabis-related quarterly sales less than C$5 million, rose 16.8% as it closed at 77.76. It ended at 66.59 in 2020, declining 31.2%. The strongest performer was Decibel Cannabis (CSE: DBCCF), which was the best performing stock in the broader index as well.

The returns for the overall sector varied greatly, with 6 names gaining more than 50% and 3 declining by more than 10%. The entire group posted a median return of 22.6%: 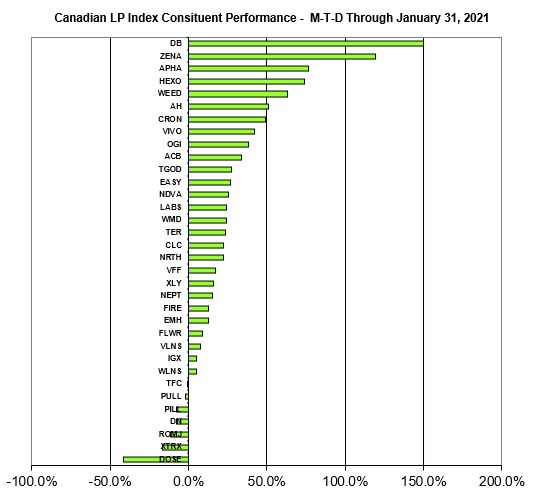 For February, the overall index will have 36 constituents after the removal of Rapid Dose Therapeutics, which fell below the minimum price for companies generating less than C$2.5 million quarterly LP revenue, and the additions of Eve & Co, Namaste Technologies and Nextleaf Solutions.