BMO analysts Tamy Chen and Peter Sklar today observed that the Canadian cannabis market has been so slow to develop that they are challenged to predict which LPs can become long-term winners or how many LPs the market can support. Despite challenging conditions, the number of LPs continues to rapidly expand. At the end of 2019, there were 279. On Friday, Health Canada issued 8 additional licenses, bringing the total to 417, which excludes the revoked licenses of Agrima, Alberta Green Biotech, Bloomera and a small processing facility that belonged to Canopy Growth, the expired license of Evergreen Medicinals and the voluntarily cancelled license of Avalite Sciences. In just six months, Health Canada has boosted the number of licenses by 49%!

The market has been so challenging that several smaller publicly traded and private LPs have sought creditor protection this year, while, at the same time, some of the largest LPs with very challenged financials, like HEXO Corp (TSX: HEXO) (NYSE: HEXO), Sundial Growers (NASDAQ: SNDL), Tilray (NASDAQ: TLRY) and Zenabis Global (TSX: ZENA) (OTC: ZBISF),  have turned to aggessive equity sales to sustain themselves. Many other larger LPs have been repairing their balance sheets as well. Additionally, some of the leading LPs have been shuttering production facilities. Inventories remain sky high. Take, for example, Canopy Growth (TSX: WEED) (NYSE: CGC), which ended the March quarter with a stunning inventory balance of C$391 million. Aurora Cannabis (TSX: ACB) (NYSE: ACB) just last week announced a pending C$140 million inventory write-down.

While the market continues to advance, with year-over-year growth in retail sales at 142% in April, it has failed, thus far, to meet early expectations. The slow pace by Ontario to open retail stores is cited, correctly in our view, as a reason, and the roll out of “Cannabis 2.0” has been quite muted as well, perhaps impacted by the pandemic. We think that the sales trends are about to improve, and we are also encouraged by the write-downs of inventory and closures of many production facilities. The moves by many companies to improve their balance sheets have weighed on the sector, as measured by the New Cannabis Ventures Canadian Cannabis LP Index, which, while up substantially off of the March lows, remains near the same level three years ago: 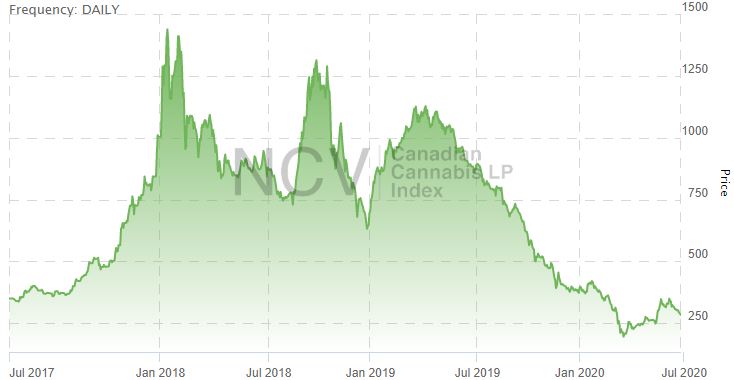 We have been continually revising our index and the rules for inclusion since we began sharing it with readers, and, at a time that we think will prove to be a substantial inflection point in the market, we are making some significant changes for July that we want to detail. The number of publicly traded LPs, all of which historically were included until the beginning of this year when we began to require a price above C$0.20 (unless there was quarterly revenue in excess of C$1 million), has continued to expand. We count a total of 63, though several are operating under bankruptcy. We are raising the bar again, requiring the quarterly revenue to be at least C$2.5 million, a move that will help reduce the number of members in the index to 35.

In addition to providing our readers with the index that represents the Canadian LP sector, we have been breaking it down into three sub-sectors, including Tier 1, Tier 2 and Tier 3. We have found that there are substantive differences in the returns of the sub-sectors, which have been based on the same level of revenue for quite some time: Tier 1 has included names with quarterly revenue in excess of C$10 million, Tier 2 has included names between C$2.5-10 million, and Tier 3 has included all other names that met the price constraint or that had quarterly revenue in excess of C$1 million.

We are raising the bar here too in order to better reflect the market as it has matured. Going forward, we have raised the minimum quarterly revenue for Tier 1 to C$20 million, which will reduce the number of members to six: Aurora Cannabis, Aphria (TSX: APHA) (NASDAQ: APHA), Canopy Growth, HEXO Corp, Organigram (TSX: OGI) (NASDAQ: OGI) and Valens (TSX: VLNS) (OTC: VLNCF). The latter two are scheduled to report their most recent quarters by mid-July as we detailed yesterday. Note that neither Tilray, which would qualify for this sub-index, nor Sundial are eligible because they trade only in the U.S.

Our goal is to provide our readers with a way to track an important part of the global cannabis market in a meaningful way, and we believe that the changes we are implementing will help us continue to achieve this objective. Quite simply, the markets are evolving, with some companies scaling up, albeit slowly, while many others failing are failing to do so. We note that many of the publicly traded LPs excluded from the index have very little trading volume or revenue, and, for these reasons, don’t reflect the future of the market. We will provide more detail later this week when we review the performance of the Canadian LPs for June.