After losing almost 7% in August, the Canadian Cannabis LP Index continued to struggle in September, losing 15.4% to 225.41: 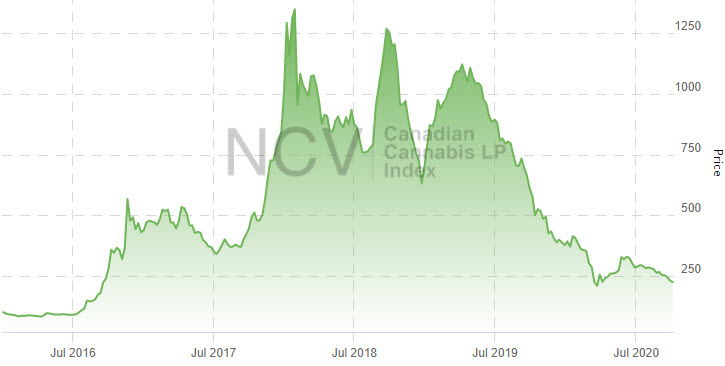 Among these largest LPs by revenue, Aphria, HEXO and Canopy Growth all fell less than the overall market. Aurora Cannabis dropped 52%, the worst performer among all LPs during the month.

The worst performers in this tier included Zenabis, down 50%, Supreme Cannabis, down 33%, and Radient Technologies, down 32%. Delta 9 rose 2% during the month.

Tier 3, which included the 14 qualifying LPs that generate cannabis-related quarterly sales less than C$5 million, declined 10.6% as it closed at 63.85. It ended at 96.76 in 2019, declining 45.0%, and is down 34.0% in 2020. Two names in this group declined by more than 30% while three posted gains. The strongest performers, both of which gained more than 10%, included CannTab Therapeutics (CSE: PILL) (OTC: CTABF) and Speakeasy Cannabis (CSE: EASY) (OTC: SPBBF). The Green Organic Dutchman (TSX: TGOD) (OTC: TGODF) was the worst performer, losing more than 30%.

The returns for the overall sector varied greatly, with 2 names gaining more than 10%, while 5 declined by more than 30%, with the entire group posting a median return of -14.3%: 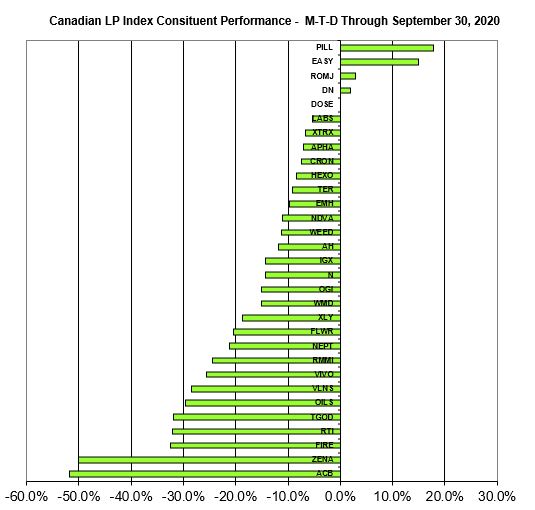 For October, the overall index will have 29 constituents, with the removal of Emerald Health (TSXV: EMH) (OTC: EMHTF), IntelGenx Technologies (TSXV: IGX) (OTC: IGXT) and Nextleaf Solutions (CSE: OILS) (OTC: OILFF), each of which fell below the minimum price and had cannabis revenue of less than C$2.5 million in the most recent quarter. Additionally, Trichome Financial (CSE: TFC) (OTC: TRICF) joins Tier 3.