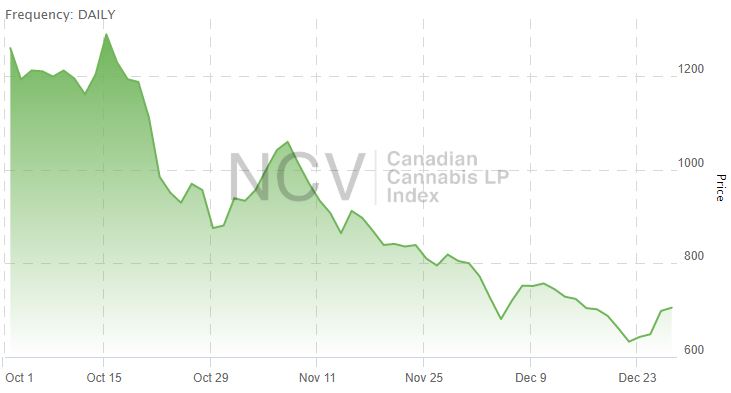 The index ran up into the October legalization beginning in mid-August after the announcement of the C$5 billion investment by Constellation Brands (NYSE: STZ) into Canopy Growth (TSX: WEED) (NYSE: CGC), hitting an all-time closing high of 1289.57 on October 15th and then declining by 51% to a new 2018 low before bouncing in late December. For all of Q4, the index declined 43.8%, and the loss for the year was 29.9%: 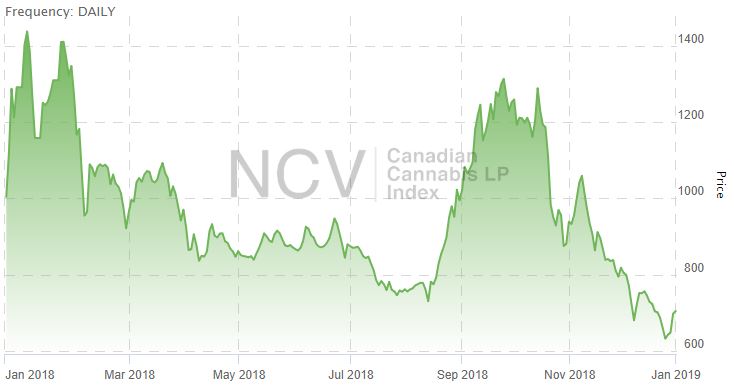 The biggest story of the month was the Altria (NYSE: MO) pending investment into Cronos Group (TSX: CRON) (NASDAQ: CRON), which will give the tobacco company control of the LP. Tilray (NASDAQ: TLRY) and AB InBev (NYSE: BUD) each agreed to invest up to $50 million into a research partnership to develop non-alcohol THC and CBD beverages. Another important theme was LP activity outside of Canada, with some, like Canopy Growth and TerrAscend (CSE: TER) (OTC: TRSSF), expanding operations into the U.S., while others extended operations into Europe and Latin America.

Tier 1, which included the LPs that are generating sales of at least C$4 million per quarter, fell 18.4% in December and ended the year down 7.7%. This group included Aphria (TSX: APHA) (NYSE: APHA), Aurora Cannabis (TSX: ACB) (NYSE: ACB), CannTrust (TSX: TRST) (OTC: CNTTF)  and Canopy Growth. Within the group, Aphria had the worst return at -25.3% after coming under attack for its LATAM acquisition. It was the poorest performing major LP in 2018, declining 58.0%. Canopy Growth’s 23.1% 2018 return, the only positive performance among Tier 1 LPs, led the group. Aurora Cannabis posted the best return among Tier 1 LPs during the month, declining just 10.8%.

Tier 3, which included the LPs that are licensed to cultivate but not yet approved to sell, fell 6.5% and declined 26.4% in 2018. The best performers from this group were Valens GroWorks (CSE: VGW) (CSE: MYMSF) and MediPharm Labs (TSXV: LABS) (OTC: MLCPF), both of which have a business model focused on processing rather than cultivation. The worst performer among this group was FSD Pharma (CSE: HUGE) (OTC: FSDDF), which walked away from the pending acquisition of Therapix Biosciences (NASDAQ: TRPX) after having named a new CEO in November.

The returns for the overall sector varied greatly, with three names gaining more than 20%, while four declined by more than 30%: 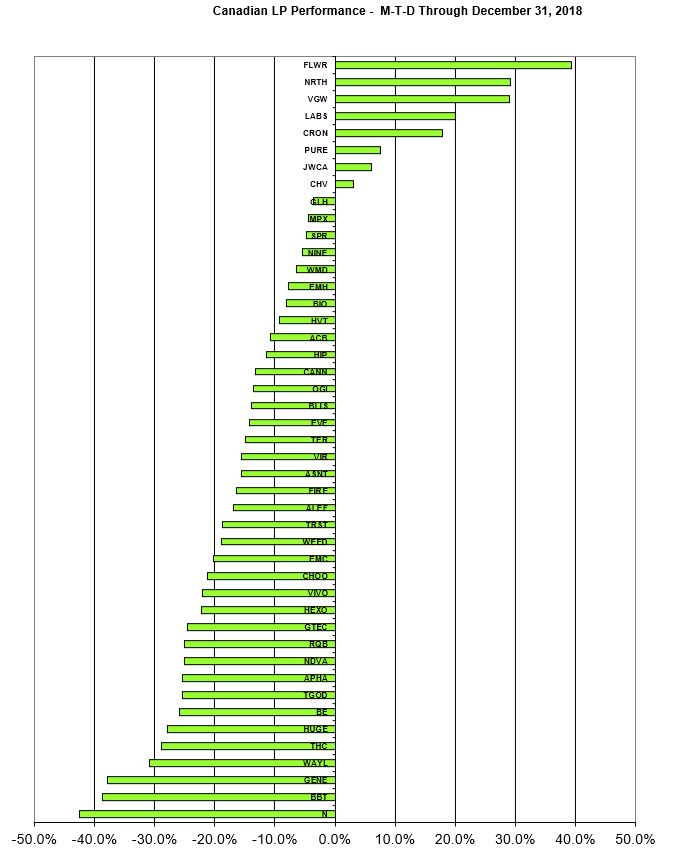 For January, the overall index had two changes, with AgraFlora (CSE: AGRA) (OTC: PUFXF) joining after acquiring the remaining equity of AAA Heidelberg, which became licensed in October, and Choom Holdings (CSE: CHOO) (OTC: CHOOF) exiting after divesting most of the Specialty Medijuana Products LP. We have substantially revised the definition of the Tiers for 2019. Going forward, Tier 1 will include those names that are generating more than $10 million in quarterly revenue and will continue at this time to include all four of the prior members. Tier 2 will include companies generating quarterly sales of $2.5 million to $10 million and will include initially five companies:  The balance of the index, those LPs generating less than $2.5 million in quarterly revenue, will be included in Tier 3. Readers should be aware that Tilray, with no Canadian listing, is not eligible for inclusion in the index, which is denominated in Canadian dollars.