After sinking more than 25% in October, the Canadian Cannabis LP Index declined another 14.8% in November to 799.72: 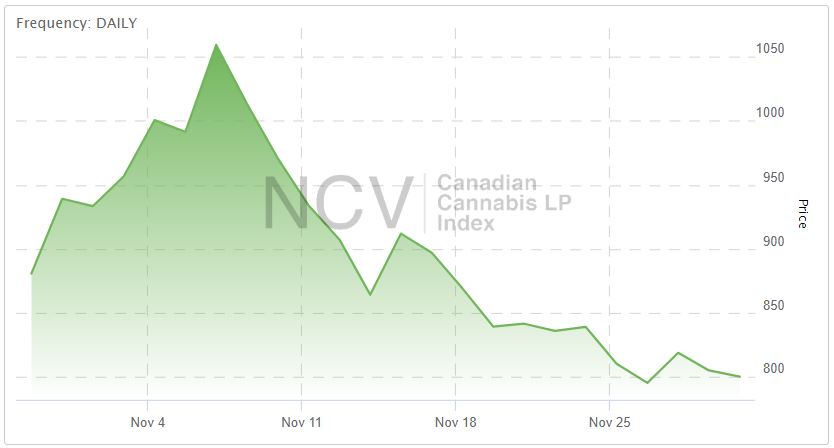 The index had run up from 2018 lows in mid-August after the announcement of the C$5 billion investment by Constellation Brands (NYSE: STZ) into Canopy Growth (TSX: WEED) (NYSE: CGC) ahead of the  legalization in Canada on October 17th and then reversed in mid-October. An increase in the supply of stock due to new LPs going public and capital raises from existing ones, disappointment in the initial roll out of legalization, a failure of deals involving Diageo and Coca-Cola to materialize and overall market weakness has left the index down 20.4% in 2018 and 9.5% above the August lows: 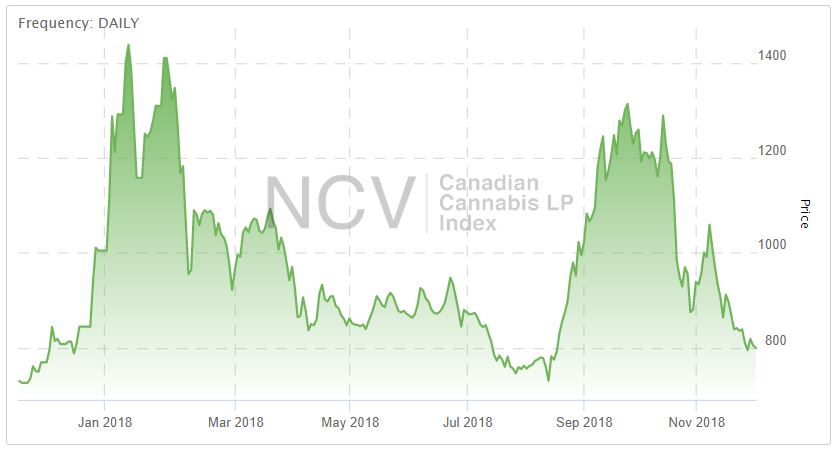 One benefit to the decline in prices has been that LPs have stopped selling new shares. Additionally, there were no new listings for any LPs going public during the  month. Management changes increased, with Invictus MD Strategies (TSXV: GENE) (OTC: IVITF) replacing its CEO with a member of the Board of Directors and Emerald Health (TSXV: EMH) (OTC: EMMBF) seeing both its CEO and CFO depart, with the Chairman, Avtar Dhillon, assuming the role of President.  Invictus also announced the acquisition of GTEC Holdings (TSXV: GTEC) (OTC: GGTTF) in an all-stock deal as well as the acquisition of a privately-held LP in British Columbia. Terra Tech (OTC: TRTC) and Golden Leaf Holdings (CSE: GLH) (OTC: GLDFF) entered into a non-binding agreement to merge. Many of the LPs reported financials during the month, including four of the five largest LPs. Much of the news during the month focused on international expansion. Finally, the industry was reminded of the importance of compliance, as Health Canada moved towards revoking the license of Agrima Botanicals, a subsidiary of Ascent Holdings (CSE: ASNT) (OTC: PGTMF).

Tier 1, which includes the LPs that are generating sales of at least C$4 million per quarter, fell 16.8% in November and is now up 13.1% year-to-date. This group included Aphria (TSX: APHA) (NYSE: APHA), Aurora Cannabis (TSX: ACB) (NYSE: ACB), CannTrust (TSX: TRST) (OTC: CNTTF)  and Canopy Growth. Within the group, Aphria had the worst return at -33.1%. It has been the poorest performing major LP in 2018 thus far, declining 43.8. Canopy Growth’s 51.8% year-to-date return, the only positive performance among major LPs, leads the group. It declined the least during the month among the major LPs.

Tier 3, which includes the LPs that are licensed to cultivate but not yet approved to sell, fell 23.0% and is now down 21.3% year-to-date. The best performer from this group was BlissCo (CSE:BLIS) (OTC: HSTRF), which gained 4.8%. Ascent Industries, facing revocation of its license, performed the worst among the group with its 52.6% decline.

The returns for the overall sector varied greatly, with only Cronos Group gaining more than 20%, while six declined by more than 30%: 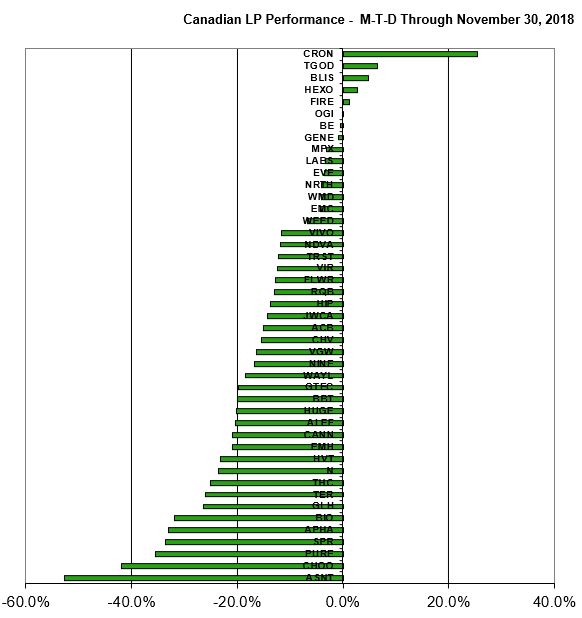 For December, the overall index had no changes. BlissCo moved from Tier 3 to Tier 2 after having received an amendment to its license that permits sales. Readers should be aware that Tilray, with no Canadian listing, is not eligible for inclusion in the index, which is denominated in Canadian dollars.