After a big 2nd half of 2016 and some strength in early 2017, Canadian LPs were under heavy pressure from April through June following a glut of supply (new publicly-trading LPs, capital raises) and a marked increase in the pace of licensing by Health Canada. The market also priced in some uncertainty surrounding distribution and how it will impact the rollout of legal cannabis sales next year.

With just another trading session to go, it looks like the LPs will have their first positive full month since February. My proprietary index rose 4.9% in January and 10.5% in February but declined 5.9% in March, 4.4% in April, 12.4% in May and 11.2% in June before rebounding 14.1% through mid-day trading today, leaving the index still down 7.5% YTD. 17 of the 19 LPs in the index have rallied this month: 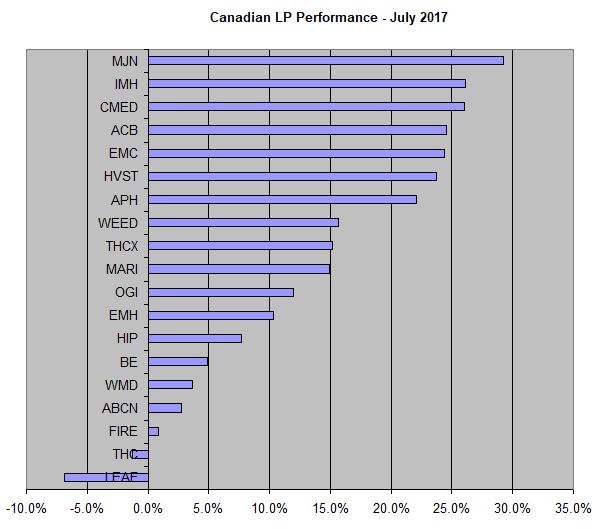 Three names have increased over 25%, with Cronos Group (TSXV: MJN) (OTC: PRMCF), Invictus MD Strategies (TSXV: IMH) (OTC: ITIVF) and CanniMed Therapeutics (TSX: CMED) (OTC: CMMDF) showing leadership this month. Cronos Group is the best performing LP YTD, up 49.3%. CanniMed has recovered most of its losses in 2017, down 3.6%, but it continues to trade below its $12 IPO price from late 2016.

The LPs up more than 10% so far in July include Canopy Growth (TSX: WEED) (OTC: TWMJF), Hydropothecary (TSXV: THCX) (OTC: HYYDF), Maricann Group (CSE: MARI) (OTC: MRRCF), Organigram (TSXV: OGI) (OTC: OGRMF) and Emerald Health (TSXV: EMH) (OTC: EMHTF). Canopy has performed well since announcing a $25mm private placement at $8.05 and is now up 0.9% in 2017. The company will be reporting its FY18-Q1 results by mid-August. Maricann has caught traders’ attention as a play on the German medical cannabis market.

Newstrike (TSXV: HIP) (OTC: NWRKF),  Beleave (CSE: BE) (OTC: BLEVF), WeedMD (TSXV: WMD) (OTC: WDDMF), ABcann Global (TSXV: ABCN) (OTC: ABCCF) and Supreme Pharma (TSXV: FIRE) (OTC: SPRWF) are all up less than 10%. ABcann was able to finalize its sale of stock at a substantial premium as part of a deal with Cannabis Wheaton (TSXV: CBW) (OTC: KWFLF) earlier this month. Supreme announced earlier this month that it can now sell cannabis after having received its cultivation license 15 months earlier. Insiders have been buying shares.

MedReleaf (TSX: LEAF) (OTC: MEDFF) and THC BioMed (CSE: THC) (OTC: THCBF) are the only two LPs in the red. THC BioMed, which has been unable to raises substantial capital like its peers, is the worst performing LP YTD, down almost 60%. MedReleaf continues to trade about 15% below its recent IPO price of $9.50. The company will report its FY18-Q1 results on 8/14.

In addition to the 19 LPs mentioned, TerrAscend (CSE: TER) began trading as an LP earlier this month after receiving its Health Canada cultivation license and will join the index next week. DOJA Cannabis expects to begin trading next week on the CSE with the symbol “DOJA”, and CannTrust and The Green Organic Dutchman are in the process of going public later this year. To stay on top of the Canadian LP sector, readers can visit our dedicated resource page.