Cannabis stocks are off to a strong start in 2017, but, after peaking on Tuesday, they have given up some of the gains over the past two days. The Cannabis Stock Index began the year at 74.10 and closed on Tuesday at 99.21, representing an increase of 33.9%. The increase has been driven in large part by one of the 44 members of the index, Cannabics Pharmaceuticals (OTC: CNBX), which posted a return of 842% YTD at its closing price of $6.45 on Tuesday before extending to an all-time high of $7.60 and then reversing on Wednesday: 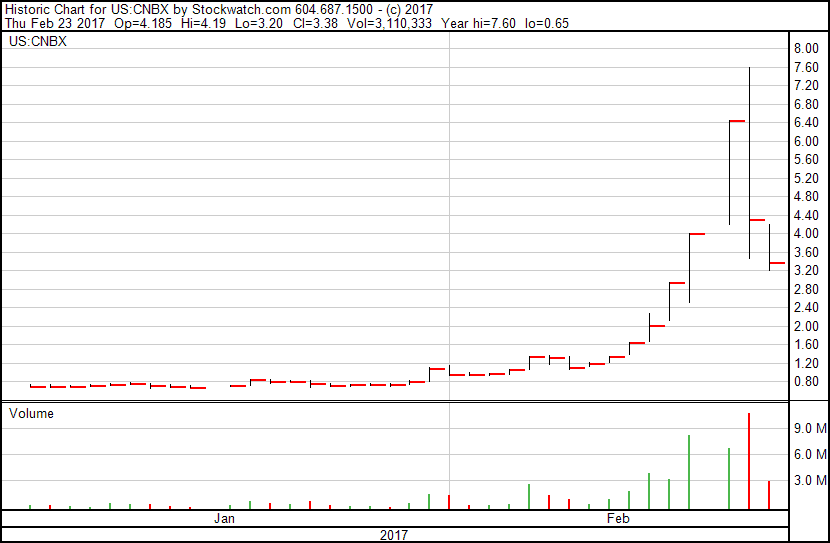 What has been most remarkable about the run in CNBX is that the dollar-volume of trading exceeded $92mm on Tuesday and Wednesday as traders jumped aboard. The stock is extending the reversal today following the revelation that OTC Markets reached out to the company regarding trading in the stock, according to the company’s press release issued before the market opened.

Cannabis stocks began to rally in early September, when the index was just 33.16. The index had increased to 60.58 by October 13th, when General Cannabis (OTC: CANN) issued a press release, as we reported, indicating that “OTC Markets informed the Company that it became aware of certain promotional activities concerning General Cannabis and its common stock.”  The inquiry never resulted in any issues for the company, and the stock quickly recovered initial losses before extending to marginal new highs. More than 4 months later, CANN, last quoted at $2.44, trades 42% below the closing price on October 12th, the day before it revealed the inquiry.

Cannabics, which describes itself as “a U.S based public company dedicated to the development of Personalized Anti-Cancer and Palliative treatments” that has an Israeli-based research group working on “on harnessing the therapeutic properties of natural Cannabinoid formulations and diagnostics,” has reported immaterial revenues since inception and has about 114mm shares outstanding according to its 10-Q for the quarter ending 11/30/16.  At the $7.60 peak yesterday, it had a market cap of $866mm. Even at the reduced price of $3.38, the market cap is $385mm for a company that has less than $289K in assets (and $513K in liabilities) and that spent only $22,133 in R&D last quarter, FY17-Q1, and just $177,607  for all of FY16.

Traders have been piling into the stocks of several other companies that lack substance and that don’t really represent the positive developments taking place in the cannabis industry, with stocks that are viewed as “biotech” plays drawing particular interest. As of 2/22, despite the overall index having increased 24.2%, 18 of the 44 index members have actually declined so far in 2017, with 65% of the gain contributed by just the two best performing stocks.

At 420 Investor, I don’t include CNBX on my Focus List, but I have shared my views, most recently on Tuesday afternoon:

I got a question from a new subscriber about CNBX. I am shocked that this company is where it is, with a market cap pushing $700mm. While it could keep going up, because literally anything is possible in penny stocks, I think this is a worthless company.

Having seen a lot of parabolic spikes in my four years of following the publicly-traded cannabis sector, I am confident that the rally in CNBX is nothing more than momentum trading, and I expect that the stock will ultimately return to where it started, perhaps even lower, as at a price of $0.20, with a market cap of $23mm, the valuation would still not make sense.