Before its debut just over a year ago, we started paying close attention to AdvisorShares Pure US Cannabis ETF (MSOS). In a preview that we shared with subscribers at 420 Investor, we discussed that it represented a major advance over the existing ETFs at the time, all of which were focused on Canadian LPs. We weren’t sure at the time if it would be successful, but we monitored it closely after it began trading right after Labor Day.

In November, we noted that the ETF had surged past $100 million in assets, a milestone that led us to predict it could quickly reach $1 billion in assets, which proved to be the case. The rapid rise was due to both inflows and price appreciation.

Today, MSOS, which has seen its price decline from the peak close by 36%, has $879 million in assets, but, perhaps not widely appreciated is the fact that it has continued to see inflows, with the number of shares increasing to a record 27.21 million this week, up 342% from the end of 2020:

It’s not only the number of shares increasing by 7% just last week after more than six months of being relatively unchanged that has piqued our interest. The stock chart shows a high-volume reversal since mid-September. We have been spending a lot of time discussing this with subscribers at 420 Investor, as we think that perhaps it is the first sign that the consolidation of the past seven months may be ending. This weekly perspective shows that the ETF held the 76.4% Fibonacci retracement from the lows last September to the February peak: 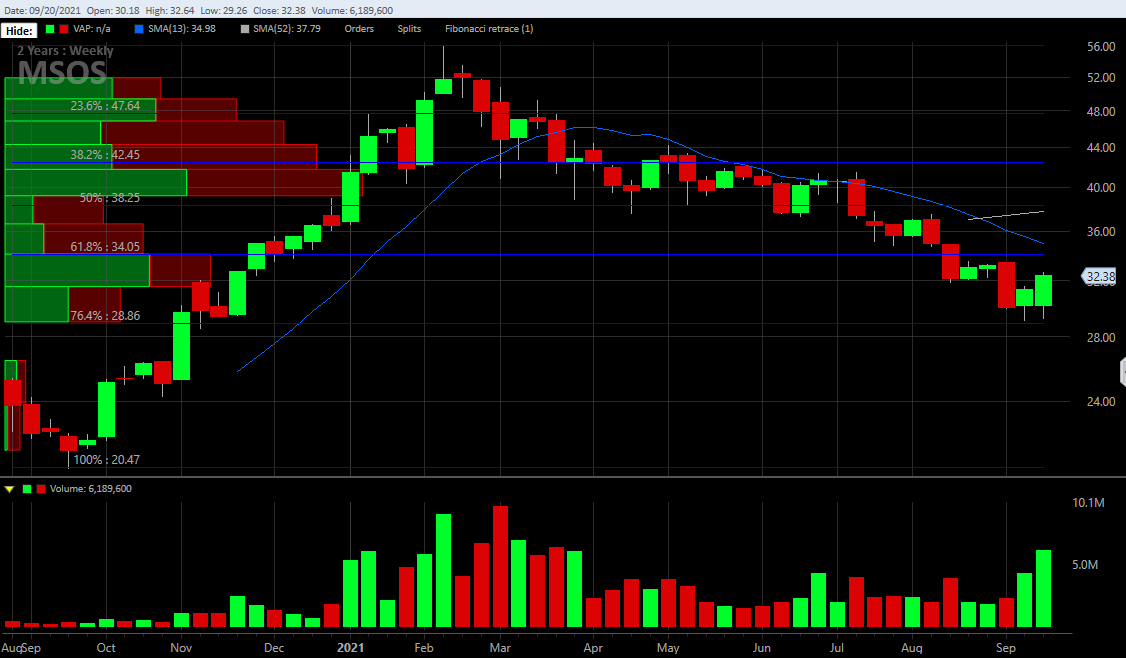 Note as well that the volume expanded in the prior week as it set its low and reversed and then expanded as it extended its gains. This happened at the same time as the New Cannabis Ventures Global Cannabis Stock Index posted a new low this week, creating a divergence. To be clear, this high-volume reversal isn’t a definitive change in the trend, but it looks promising to us. Since posting its 2021 closing low of 29.29 on 9/14, it has improved by 10.6%.

While we continue to believe that most investors are likely to be better served by investing in individual stocks rather than the ETF, we have long recognized that many either aren’t able to buy the underlying stocks, which trade on the Canadian Securities Exchange and the OTC Markets, or don’t want to pick stocks. MSOS trades on the NYSE ARCA. For those who can’t or don’t want to trade stocks on the CSE or OTC, MSOS is an attractive option in our view. It is also a good alternative for those who wish to engage in options strategies, which are available with the ETF but not most of the underlying securities. The ETF provides some diversification as well.

At the end of January, we shared a somewhat negative perspective of MSOS with subscribers at 420 Investor, noting several causes for concern, including poor performance as well as the inclusion of several stocks that made little sense in our view for those looking to capitalize on the growth in the American cannabis industry.

As far as performance, there are certainly two considerations that investors will always face: the management fee and the cost of the swaps that the fund does. But, even beyond that, the fund suffered in late 2020 and early this year from poor stock selection as well as having too much cash in a rallying market. As it relates to performance, we note that the ETF has no explicit benchmark, so investors don’t really have an easy way to judge if the manager is delivering performance that is better than or worse than what one should have expected. We believe that the New Cannabis Ventures American Cannabis Operator Index is a very reasonable proxy. While MSOS lagged it sharply in the early days, we note that this is no longer the case. So far in 2021, both MSOS and the American Cannabis Operators Index are both down a little more than 11%. The bottom-line is that performance is not the concern for us that it was in the early days.

Another improvement has been that the stocks in the ETF now are all relevant. In the beginning, there were some odd biotech stocks. Today, 84.4% of the ETF is spread across 21 state-licensed cannabis operators. The balance consists of 5 ancillary companies (12.1%), 2 CBD companies (0.2%) and cash (3.2%). Investors should be aware that the top 6 names make up over 58% of the holdings.

In addition to the reasons mentioned above why MSOS is potentially attractive to some investors, the ETF could play a substantial role in helping some investors harvest tax-losses in a way that will allow them to stay invested in the sector. For those who bought the largest cannabis companies near their peaks in February and are now sitting on losses, it could make sense to sell their holdings and buy MSOS for 31 days, avoiding a potential wash-sale that would nullify the tax-loss. This is especially relevant to holders of its largest holdings, Green Thumb Industries, Curaleaf, Trulieve and Cresco Labs.

To be clear, we think that MSOS has improved since its early days. It is now one of the largest holders of cannabis stocks and plays a very valuable role in widening the investor base. The surge in demand for shares, reflected by the increased number as well as the high-volume reversal in the price, is perhaps a early harbinger that the downturn since February has finally found a bottom.

Hailing from Israel and renowned for its leading cannabinoid research, NASDAQ listed IM Cannabis Corp. invests in and supports both clinical research and technological innovations of cannabinoids. As a multi-country operator in the medical and adult-use recreational cannabis sector, IM Cannabis Corp. has operations in Israel, Germany and Canada. The company has expanded its business to the retail sector with acquisitions of medical cannabis retail pharmacies and online platforms, distribution centers and logistics hubs enabling safe delivery of medical cannabis and control over the entire value chain, from seed to patients. 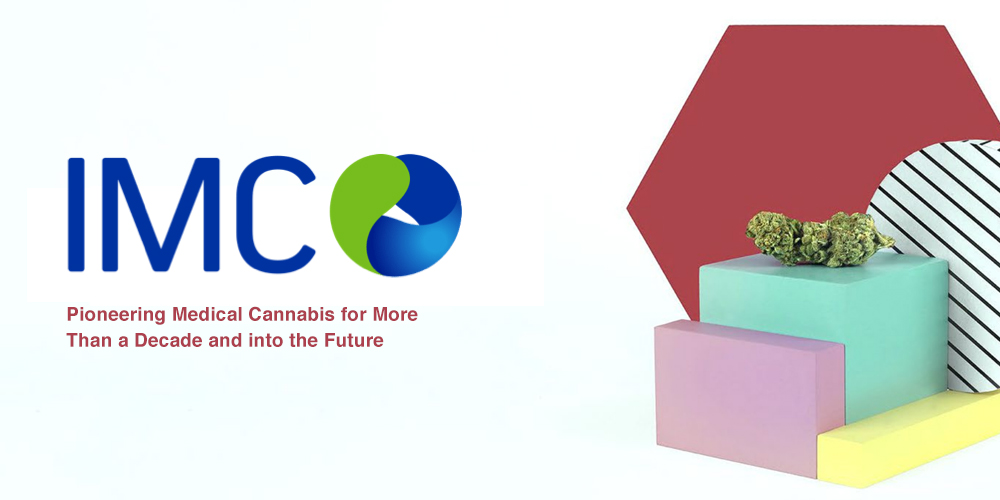 Get up to speed by visiting the IM Cannabis Corp Investor Dashboard that we maintain on their behalf as a client of New Cannabis Ventures. Click the blue Follow Company button in order to stay up to date with their progress.