46 companies currently qualify for inclusion, with 28 filing in U.S. dollars and 18 in the Canadian currency, which is the same as we reported in mid-May. Several companies that had been expected to report by the end of April or May have taken advantage of an extended deadline to accommodate delays due to the COVID-19 crisis, including five that report in U.S. dollars and three that file in Canadian dollars. We expect some additional delays as well.

In May 2019, we added an additional metric, “Adjusted Operating Income”, as we detailed in our newsletter. The calculation takes the reported operating income and adjusts it for any changes in the fair value of biological assets required under IFRS accounting. We believe that this adjustment improves comparability for the companies across IFRS and GAAP accounting. We note that often operating income can include one-time items like stock compensation, inventory write-downs or public listing expenses, and we recommend that readers understand how these non-cash items can impact quarterly financials. Many companies are moving from IFRS to U.S. GAAP accounting, which will reduce our need to make adjustments. Please note that our rankings include only actual reported revenue, and not pro forma revenue.

While there are some delayed reports pending, the back half of May included some of the largest MSOs. In general, the companies advanced revenue and improved the bottom-line as they overcame challenges imposed by the pandemic. Curaleaf (CSE: CURA) (OTC: CURLF) climbed a notch, gaining the #2 spot for MSOs, with Q1 including revenue from its Select acquisition for the first time. Trulieve (CSE: TRUL) (OTC: TCNNF) beat expectations, with revenue reaching almost $80 million as the company reported an adjusted operating profit of $28.1 million during Q1.

Cresco Labs (CSE: CL) (OTC: CRLBF), which included revenue from its recently completed Origin House acquisition, moved up the ranks as it added its first adult-use Illinois revenue as well during Q1, while MedMen Enterprises (CSE: MMEN) (OTC: MMNFF) slipped as the company closed stores in Florida during its fiscal Q3. While the company reported a large loss, it improved from Q2. Harvest Health & Recreation (CSE: HARV) (OTC: HRVSF) also benefited from some acquisitions, as it grew 19% in Q1 compared to Q4. 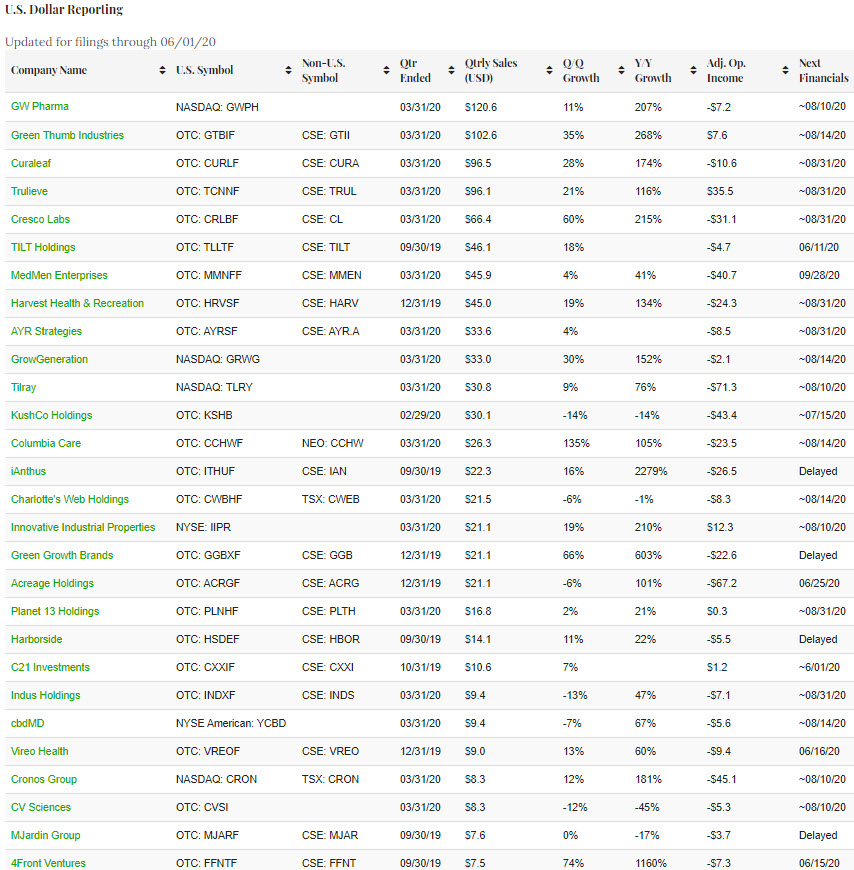 Acreage Holdings, according to Sentieo, is expected to see revenue grow only slightly in Q1 from Q4, with analysts projecting $44.2 million, up 1% sequentially and 34% from a year ago. Tilt Holdings plans to issue its Q4 financials in mid-June and then follow up later in the month with Q1. In Q4, the consensus is that revenue increased to $47 million from $46.1 million in Q3, as the company was impacted by the vaping crisis, with Q1 revenue expected to drop to $38 million, which reflects the shutdown in Massachusetts for adult-use late in the quarter. Vireo Health has pre-announced Q1 revenue at $12.1 million, up approximately 34% from Q4 and 109% from a year ago. 4Front will be reporting its Q4. Two analysts expect revenue to grow to $10 million, though the estimates range from $7 million to $13 million, according to Sentieo.

Of the companies that report in Canadian dollars, Canopy Growth (TSX: WEED) (NYSE: CGC), TerrAscend (CSE: TER) (OTC: TRSSF), Alcanna (TSX: CLIQ) (OTC: LQSIF) and Meta Growth (TSXV: META) (OTC: NACNF) reported since our last update. Canopy Growth fell short of analyst expectations in its fiscal Q4 ending in March, reporting revenue at C$108 million compared to the C$129 million consensus, down 13% from Q3. The quarter included large restructuring charges. TerrAscend, which reported Q1 revenue of nearly C$35 million, reported a positive adjusted EBITDA and provided guidance for margins to continue to expand in Q2 and to achieve C$45 million in revenue. The company generated the vast majority of its revenue from its American operations. Alcanna’s retail cannabis business grew 28% sequentially during the quarter as its gross margin expanded to 32.5%. Peer Meta Growth saw revenue decline sequentially again during its fiscal Q1, with a highly competitive environment in Alberta resulting in a 16% decline from year-ago levels. 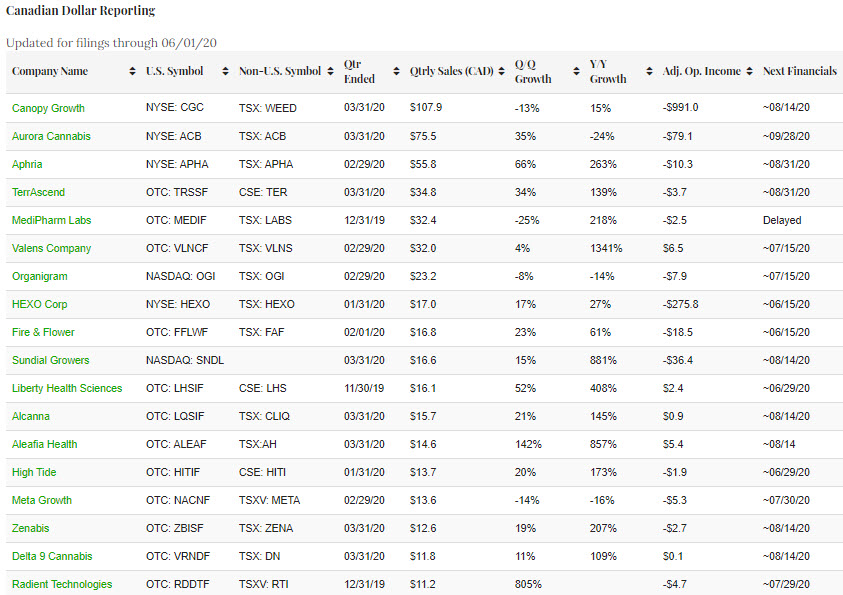 HEXO is projected by analysts, according to Sentieo, to have seen fiscal Q3 revenue of nearly C$20 million, representing a 17% sequential improvement. Retailer Fire & Flower is projected to grow fiscal Q1 revenue by over 100%, with the consensus of C$20.15 million representing 20% sequential growth. Florida cannabis operator Liberty currently has no analyst coverage, though we provide our own estimate of fiscal Q4 revenue to subscribers at 420 Investor. High Tide is expected to have generated C$19.8 million revenue in its fiscal Q2, up 45% sequentially. MediPharm Labs, which has announced a pending inventory write-down, is expected to report Q1 revenue of C$24.6 million, which would represent a decline of 24% and 12% growth from a year ago.