46 companies currently qualify for inclusion, with 28 filing in U.S. dollars and 18 in the Canadian currency, which is up two from when we reported in early May. Cronos Group (TSX: CRON) , which reports in U.S. dollars, and Aleafia Health (TSX: ALEF) (OTC: ALEAF), which reports in Canadian dollars, joined the list. Several companies that had been expected to report by the end of April or mid-May have taken advantage of an extended deadline to accommodate delays due to the COVID-19 crisis, including five that report in U.S. dollars and three that file in Canadian dollars. We expect some additional delays as well.

In May 2019, we added an additional metric, “Adjusted Operating Income”, as we detailed in our newsletter. The calculation takes the reported operating income and adjusts it for any changes in the fair value of biological assets required under IFRS accounting. We believe that this adjustment improves comparability for the companies across IFRS and GAAP accounting. We note that often operating income can include one-time items like stock compensation, inventory write-downs or public listing expenses, and we recommend that readers understand how these non-cash items can impact quarterly financials. Many companies are moving from IFRS to U.S. GAAP accounting, which will reduce our need to make adjustments. Please note that our rankings include only actual reported revenue, and not pro forma revenue.

GW Pharma retained its top spot among all companies, with revenue of $121 million ahead of expectations and tripling from a year ago. The company’s operating loss narrowed substantially as well. GTI moved to the top spot for MSOs, with revenue climbing 35% to $103 million, far exceeding the $92 million consensus, driven by strength in the Illinois and Pennsylvania markets. It also generated positive operating income.

Among ancillary companies, GrowGeneration exceeded expectations and raised its guidance after growing Q1 revenue 152% from a year ago to $33 million. REIT Innovative Industrial Properties met expectations, continuing its strong growth.

Among the CBD companies, each experienced sequential declines in revenue, with Charlotte’s Web declining the least and exceeding expectations. CV Sciences, which also exceeded expectations but fell the least. cbdMD was the only one to report revenue below analyst expectations, and it saw an operating profit swing to a loss. 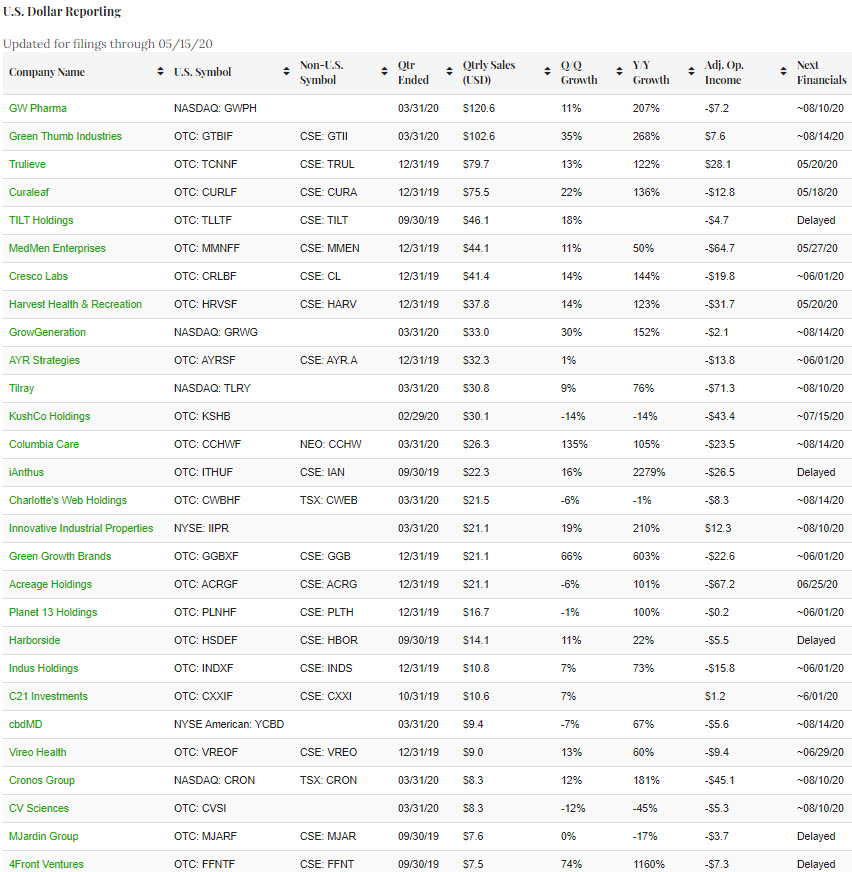 Curaleaf, according to Sentieo, is expected to have generated revenue of $101 million during Q1, which would represent sequential growth of 34%. The quarter includes two months of revenue from its recently completed acquisition of Select. Note that the company reports the additional measure of “managed revenue”, which includes the total revenue generated by non-profits to which it provides managed services. Curaleaf is in the process of acquiring these entities, and their revenue will eventually be fully included in the reported revenue.

Ayr Strategies is expected to have generated revenue during Q1 of $35.3 million, up 9% from Q4. The company’s operations in Massachusetts and Nevada were limited by regulatory changes imposed by COVID-19 late in the quarter. Analysts project that MedMen generated $48.8 million revenue during its fiscal Q3, which would be an increase of 11% over Q2 and 33% compared to the same quarter a year ago.

Cresco Labs, which is scheduled to report its Q1 on May 28th, is expected to have generated revenue of $67.1 million during Q1. The company suggested on its call in late April that revenue would be approximately $66.5 million. This represents growth of 62% over Q4 and 218% from the same quarter a year ago. Note that this is the first quarter to include a contribution from the Origin House acquisition that closed in early January.

For most of these companies, we publish comprehensive earnings previews for subscribers at 420 Investor.

Of the companies that report in Canadian dollars,  Aurora Cannabis (TSX: ACB) (NYSE: ACB), Sundial Growers (NASDAQ: SNDL), Zenabis (TSX: ZENA) (OTC: ZBISF) and Delta 9 Cannabis (TSX: DN) (OTC: VRNDF) reported in the first half of May. Aurora Cannabis surprised to the upside, with its C$75.5 million revenue in fiscal Q3 well ahead of the C$66.2 million consensus. The company also reduced its adjusted operating loss from its fiscal Q2. Aleafia’s initial entry into the rankings saw the company generate an operating profit in excess of C$5 million, and Delta 9, was also able to break even. 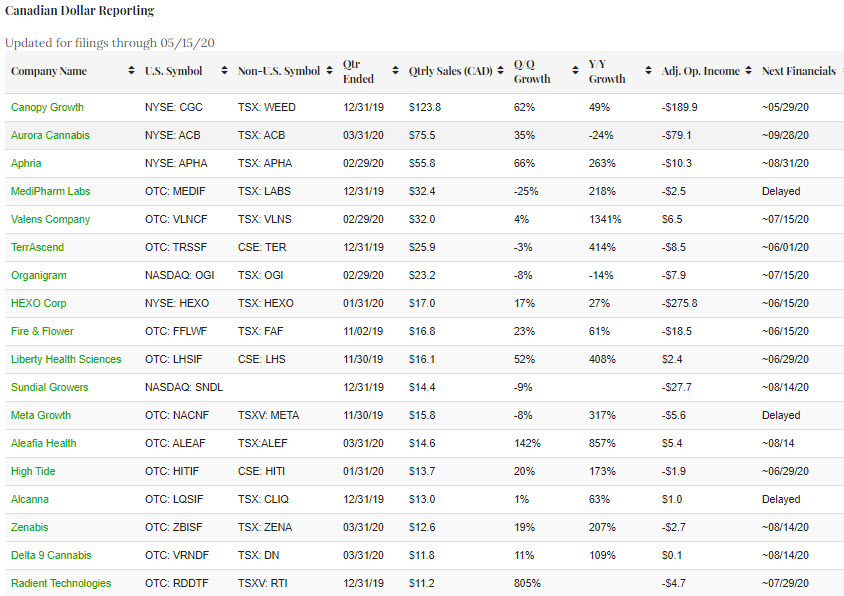 During the remainder of May, no companies have yet scheduled conference calls, though Canopy Growth (TSX: WEED) (NYSE: CGC) has tentatively scheduled a late May call to discuss its fiscal Q4 results. The company, according to Sentieo, is expected to have generated revenue of C$129 million, which would be a record for the company and would represent 5% growth over Q3. The company is also expected to detail a large restructuring charge. TerrAscend (CSE: TER) (OTC: TRSSF)  hasn’t scheduled a call but is expected to report by June 1st. It guided to Q1 revenue of C$35 million when it reported its Q4 last month. Analysts currently project revenue to be C$34.75 million.

For both of these companies, we publish comprehensive earnings previews for subscribers at 420 Investor.