This is a copy of the July 21st edition of our weekly Newsletter, which we have been publishing since October 2015.

Almost $2 billion worth of capital is waiting to be deployed into the cannabis sector, and the financial media has been slow to notice this new development. This potential capital isn’t being raised by established private or public entities but instead by low-key special purpose acquisition companies (SPACs). Two sponsors of previous deals have returned to the market, Mercer Park and Canaccord Genuity, and several others have joined them.

SPACs in general have very specific rules that offer IPO investors protection, like the ability to redeem their investment as we saw with the MTech (now Akerna) deal. In Canada, the only exchange that currently lists SPACs is the NEO, which has a spotty record of liquidity thus far. The good news, though, is that these SPACs can invest in either direct or ancillary cannabis companies operating in the United States. In the U.S, we have seen one NASDAQ SPAC close its acquisition when Akerna bought MJ Freeway, and, for now, these SPACs will be limited from buying American cannabis operators but able to invest in American ancillary companies, CBD companies and non-U.S. companies operating under a federally legal program.

As the table below indicates, three cannabis SPACs were priced from late 2017 until 2018, with all of them subsequently completing qualifying transactions. The floodgates have opened in 2019, with five deals having closed, two of which were priced earlier this month, and another that is pending: 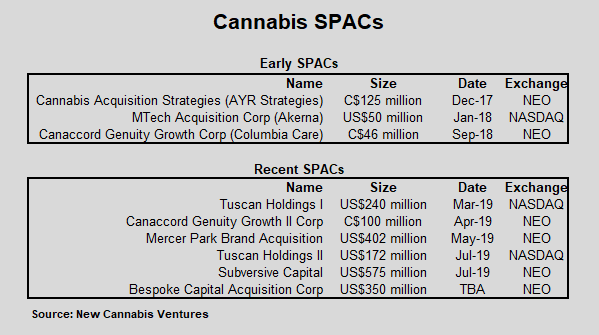 The pending deal caught our attention, as the management team of Bespoke Capital Acquisition Corp includes the former CEO of Diageo, Paul Walsh, who will serve as Executive Chairman, and a former Regional President of Pfizer Consumer Health North America, Peter Caldini, who will serve as CEO.

Not only has the number of deals increased, but so has the size, with the total raised this year exceeding US$ 1.8 billion (assuming the Bespoke deal is priced). The investment into these SPACs is a clear sign of the interest in our sector, and the deployment of this capital is quite bullish for privately held cannabis companies looking to go public. The trend, though, may be a slight negative for current public companies, as investors are opting to bet on these blank check companies, without even knowing what they will ultimately acquire rather than those that are currently trading despite the recent pullback in prices. Additionally, the ability to use cash to fund acquisitions may put the SPACs in a competitive advantage over other public companies looking to pursue M&A.

As far as investing in SPACs, we have seen no evidence thus far that investors need to get in early. Most investors will be better served by waiting until a pending acquisition is announced or even closed. The Columbia Care deal has suffered a substantial price decline that prompted a share repurchase announcement, AYR Strategies has given up a lot of gains, and Akerna went on a rocket ride and quickly returned to earth. We look forward to sharing with our readers how this capital is deployed over the the next couple of years.

Green Peak Innovations is the largest vertically integrated medical-use cannabis license holder in Michigan, which is one of the biggest medical-use cannabis markets in the country. Earlier this year, GPI raised additional capital to continue its expansion in Michigan, and recently it announced the signing of a definitive agreement to acquire one of only 22 vertical licenses in Florida. Earlier this month, Green Peak opened its first of an anticipated 30 medical cannabis provisioning centers in Michigan.

To learn more about Green Peak Innovations, a client of New Cannabis Ventures, visit the company’s page that we maintain on its behalf and click the green Get More Info button.