As we described in an earlier article, the Global Cannabis Stock Index fell very slightly in August after a larger gain in July. The index pulled back 1.3% after rallying 4.3% in June. It is still down 53.7% in 2022.

The American Cannabis Operator Index rose dramatically again in August, gaining 6.7% to 26.43 after rallying an even bigger 18.8% in July that has left the index up 26.8% in Q3 thus far: 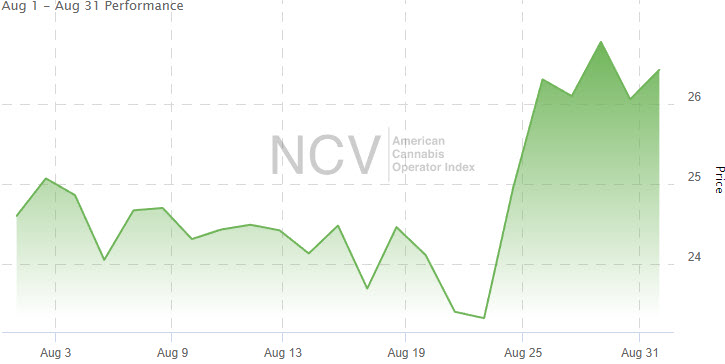 This index, which launched at the end of October in 2018, still hasn’t taken out the March 2020 lows:

In contrast to the rally in the Global Cannabis Stock Index of 3.0%, the Ancillary Cannabis Index has declined 5.6% since June 30th. The year-to-date performance has been very weak, with the index down more than the overall market, falling 62.0%:

The index is down almost 76% since launching 17 months ago: 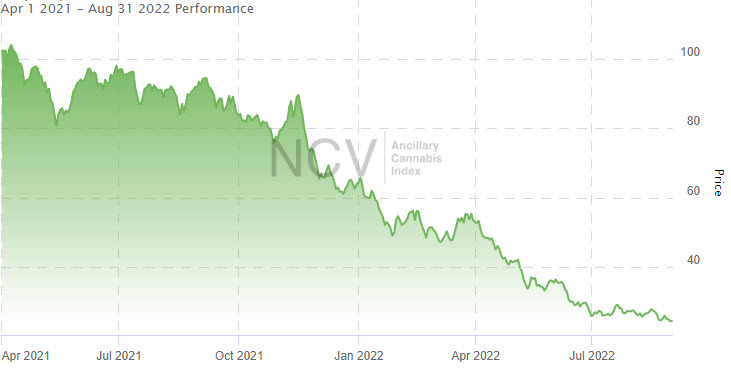 The best performing stocks during August increased by over 5% and included Chicago Atlantic Real Estate (NASDAQ: REFI), AFC Gamma (NASDAQ: AFCG) and Hydrofarm (NASDAQ: HYFM).  The worst performing stock was, by far, Leafly (NASDAQ: LFLY), which fell 71.4% and is down 84.2% in 2022. During the month, there were just 10 names that qualified for inclusion, but it has increased to 11 for the next month.  Joining for September are Agrify (NASDAQ: AGFY) and Greenlane (NASDAQ: GNLN), while AgriFORCE (NASDAQ: AGRI) exited.

The final part of the market for which we have a series of indices is the Canadian LP space. The Canadian Cannabis LP Index broke a fourteen-month losing streak, rising 6.2% to 100.55 in August:

Many LPs don’t qualify to be in the index. At the end of the month, we added Adastra Holdings  (CSE: XTRX) and Avant Brands (TSX: AVNT) (OTC: AVNTF) due to their rising revenue. Both are in Tier 3. We also moved Rubicon Organics (TSXV: ROMJ) (OTC: ROMJF) from Tier 3 to Tier 2 due to the escalation in its revenue.