46 companies currently qualify for inclusion, with 29 filing in U.S dollars and 17 in the Canadian currency, which is up from 45 when we reported at the end of February. Two Canadian licensed producers, Delta 9 Cannabis (TSX: DN) (OTC: VRNDF) and Radient Technologies (TSXV: RTI) (OTC: RDDTF), qualified for inclusion based on recent reports, while we have removed Origin House, which was acquired earlier this year by Cresco Labs.

In line with the top-line growth among MSOs, GrowGeneration experienced 17% sequential growth to $25.4 million and provided 2020 guidance of $130-135 million, including projected Q1 revenue of $32 million, 144% above year-ago revenue.

In contrast to the growth by the state-regulated cannabis operators, CV Sciences saw revenue decline 25% in Q4 from Q3 and by 34% from a year ago. It also projected further declines in Q1 to $6-8 million. Charlotte’s Web experienced a sequential decline of 9%, with its $22.8 million Q4 revenue growing 6% from a year ago. It provided guidance for 2020 revenue growth of 10-20%, with Q1 revenue expected to be approximately $20 million. Both companies cited intense competition in the natural health channel as well as delays by the FDA regarding regulation for ingestibles as contributing factors to the near-term weakness. 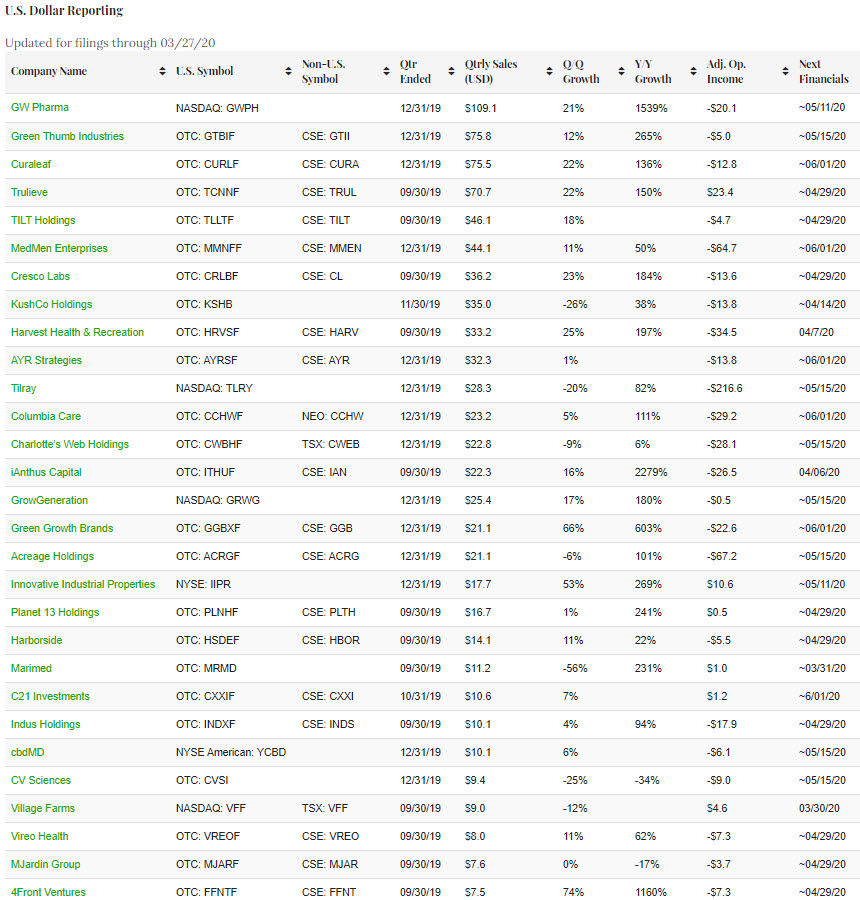 Village Farms (TSX: VFF) (NASDAQ: VFF) will report its Q4 on March 30th, while Marimed (OTC: MRMD), which is taking a large write-down, expects to report its Q4 on March 31st, and it will be removed due to its no longer qualifying based on its pre-announcement that suggested revenue will be less than $6 million. During April, we expect reports from a substantial number of companies, though only Harvest Health (CSE: HARV) (OTC: HRVSF) and iAnthus (CSE: IAN) (OTC: ITHUF) have announced dates.

Harvest is expected, according to Sentieo, to have generated Q4 revenue of $41.1 million, representing 24% growth from Q3. iAnthus is expected to have seen Q4 revenue expand by 26% to $28.1 million compared to Q3.

Two of the larger MSOs that haven’t yet announced dates for their Q4 conference calls are Trulieve (CSE: TRUL) (OTC: TCNNF) and Cresco Labs (CSE: CL) (OTC: CRLBF). Trulieve could regain its leadership position among MSOs, as it is expected to have generated $78.4 million in revenue, up 11% from Q3, while Cresco Labs is expected to grow revenue sequentially by 25% to $45.3 million.

Of the companies that report in Canadian dollars, LPs Delta 9 and Radient Technologies and retailer Alcanna (TSX: CLIQ) (OTC: LQSIF) reported in the first four weeks of March. Delta 9’s revenue grew 59% in Q4 compared to Q3, driven by sales of grow pods and other B2B offerings, which accounted for 36% of overall revenue. All of the revenue for Radient Technologies was generated through a single customer, presumably Aurora Cannabis (TSX: ACB) (NYSE: ACB). The vast majority of revenue at Alcanna is generated through its alcohol stores, but its cannabis operations generated C$13 million, similar to Q3. 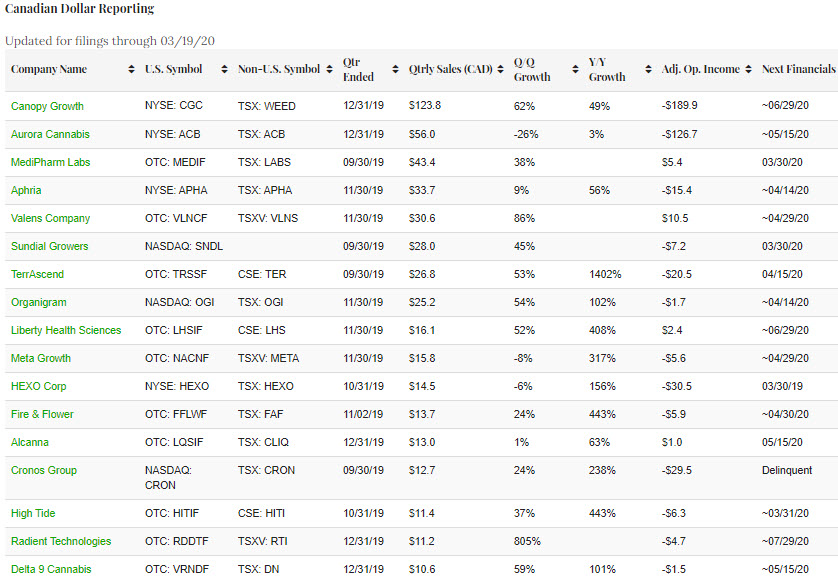 MediPharm Labs, which reports on March 30th, is expected to see Q4 revenue decline by almost 10% from Q3, according to Sentieo’s analyst consensus, which is at C$39.3 million. The company began generating revenue in 2019. Sundial Growers reports on the 30th and will host a call on the 31st. The company, which has delayed its report in order to complete modifications to its credit agreements, is also expected to have experienced a decline in Q4 revenue from C$33.5 to C$31.6 million. It generated $28 million from its cannabis operations in Q3, with the balance from ornamental flowers. HEXO Corp will report on the 30th, which is after the filing deadline. The company announced in mid-March that its Q2 net revenue grew sequentially by 17% to C$17 million. It also indicated that it expects to take an impairment charge of up to C$280 million. Cronos Group had previously scheduled its call for late February but delayed for unstated reasons. As an accelerated filer, it was required to file by March 2nd but took an extension of 15 days. It later revealed that it was restating its prior financials and hopes to have its Q4 audited financials available by the 30th, but it indicated that the timeline might not be met due to the COVID-19 pandemic. Analysts expect the company to have generated C$16.2 million during Q4. Cronos Group had previously reported C$14.6 million revenue for Q3, but it has indicated that it will be restated to C$9.5 million. High Tide will be reporting financials for its Q1.

TerrAscend will be reporting its Q4 financials on April 15th, with analysts projecting revenue of C$40 million, up 49% from Q3, according to Sentieo. Aphria and Organigram will be providing quarterly financials. Neither company has yet announced the date, but they are due by April 14th. Aphria, which generates the majority of its revenue from non-cannabis operations, is expected to have Q3 revenue $130 million, which would represent growth of 8% over Q2. The company provided annual guidance for the fiscal year of net revenue of C$575-625 million with adjusted EBITDA of C$35-42 million in January, having reported year-to-date revenue of C$247 million and adjusted EBITDA of C$2.9 million. Organigram is projected to increase revenue by 9% to C$27.4 million in its Q2 compared to its Q1, up slightly from year-ago revenue.

Fire & Flower will be reporting its fiscal year-end, while Meta Growth and Valens will be providing quarter-end financials.

Visit the Public Cannabis Company Revenue Tracker to track and explore the complete list of qualifying companies. We have recently created a way for our readers to access our library of Revenue Tracker articles. For our readers who are interested in staying on top of scheduled earnings calls in the sector, we have have created and continually update the Cannabis Investor Earnings Conference Call Calendar. Finally, for many of these companies, we publish comprehensive earnings previews for subscribers at 420 Investor.