General Cannabis (OTC: CANN) is one of the 26 cannabis-related companies I follow most closely at 420 Investor as part of my Focus List, and I continue to be cautious on the company’s near-term prospects due to my concerns about its weak results over the past two quarters as well as the existence of 6.8mm warrants with a weighted average exercise price of $0.64, a 65% discount to the current market price. I first shared this concern in November, when the stock was near $3.70. Though CANN has lost about half of its value since then, I remain cautious.

To its credit, CANN files with the SEC, generates material revenue ($2.98mm in 2016) and has relatively good corporate governance for the sector, with its Board of Directors now having a majority of independent directors. The Board includes some accomplished members, including former Leucadia National Managing Director Mark Green, who joined in January, and Peter Boockvar and Duncan Levin, who serve along with Executive Chairman Michael Feinsod and CEO Robert Frichtel.

General Cannabis financials have eroded. In the most recent quarter per the company’s 10-Q filing with the SEC, sales rose only 4% from a year ago to $719K. This represented a decline of 7% from Q4 and was negatively impacted by a 16% decline from a year ago in its security division, the largest of its four operating segments due “primarily to the loss of a significant customer due to the drop in wholesale cannabis prices in Colorado.” Strength in its consulting business helped offset the drag on revenue, but that unit reported a small operating loss. The overall operating loss doubled to $2.187mm during Q1, with operations consuming $959K in cash.

The balance sheet shows that the company ended Q1 with just $407K cash and current assets of $766K but current liabilities of $12.5mm, though most of this is “derivative liability” and not a cash obligation. General Cannabis ended the quarter with liabilities exceeding assets by over $12mm.

Fortunately, CANN will likely see a cash infusion. In 2016, it borrowed $3mm at 12% and issued 9mm warrants in conjunction, with exercise prices split equally at $0.35 and $0.70. Through Q1, 6.86mm remained (average exercise price of $0.64), with an additional 300K exercised subsequent to the end of the quarter (at $0.5833). The full exercise of the remaining warrants will give the company approximately $4.2mm, which could help offset its debt and improve the balance sheet, though the sale will likely weigh on the stock price. 6.56mm shares represents 21% of the shares outstanding and a larger percentage of the float.

The stock has been under pressure since the $5.19 double-top peak in late 2016, though it remains well above the level at Labor Day of about $0.75: 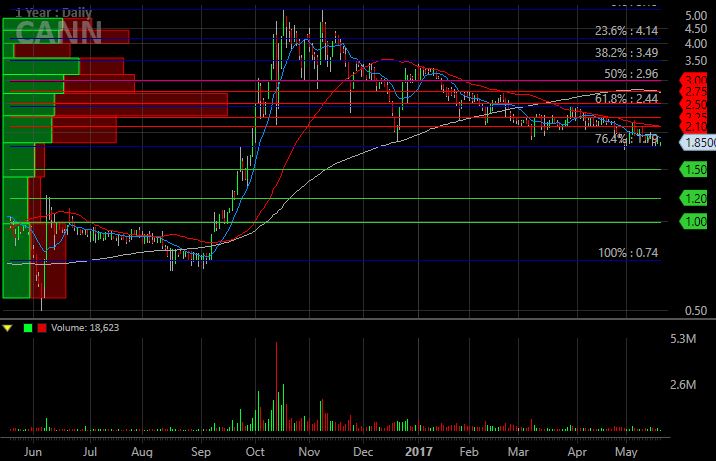 I continue to suggest caution to my subscribers, suggesting the stock could fall to the $1.20-1.50 area, perhaps as low as $1.00 as the warrant issue plays out. On a fully-diluted basis, which takes into account all of the issued options (8.8mm with a weighted average exercise price of $1.09) and the warrants, there are about 35mm shares. At $1.50, the market cap would be about $52mm, which is very high based upon its current metrics like sales or book value, but the relative valuation to the rest of the sector would be reasonable at that level. Over the past six months, there has been substantial insider selling, though this appears to have abated.

The bottom-line: Investors should keep an eye on General Cannabis but should be patient as the warrant situation plays out.