Cannabis stocks, as measured by the Global Cannabis Stock Index, fell slightly in April, declining 0.5% to 107.33, after bouncing twice near 95 early in the month: 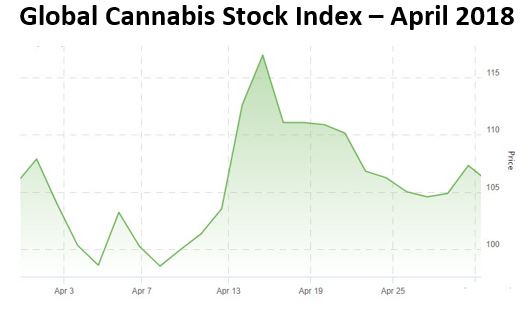 The index, which went through its last quarterly rebalancing at the end of March and has 68 qualifying members that were equally weighted at the time, declined 24.5% in the first three months of the year. Despite the losses, the index is still up almost 89% since bottoming in late October.

The biggest trend of the month was the recovery in U.S. focused names, many of which posted substantial gains in the month. Offsetting the strength in domestic names, Canadian licensed producers endured double-digit declines. 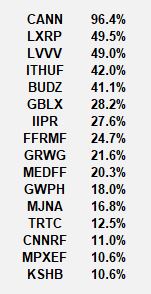 The index shot up dramatically on April 13th, when news reports indicated that Colorado Senator Cory Gardner had struck a deal with President Trump regarding the protection of states rights as it relates to the regulation of cannabis. Multi-state operators like CannaRoyalty (CSE: CRZ) (OTC: CNRRF), iAnthus Capital (CSE: IAN) (OTC: ITHUF), MPX Bioceutical (CSE: MPX) (OTC: MPXEF) and Terra Tech (OTC: TRTC) all benefited from investor perception of potentially diminished risks. Canadian LPs or companies that own stakes in LPs represented half of the twenty-eight double digit decliners, perhaps reflecting a shift in investor positioning after the U.S. political news. GW Pharma (NASDAQ: GWPH) advanced on news that an FDA Advisory Committee had given its Epidiolex unanimous support.