Cannabis stocks, as measured by the Global Cannabis Stock Index, extended the losses from mid-October, declining 20.3% to 64.02 in December, the third consecutive monthly decline, and suffered a loss of 44.2% in Q4: 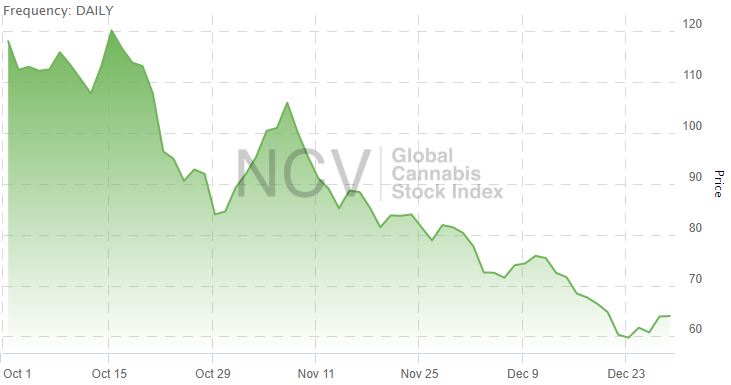 The index, which had 61 qualifying members after the rebalancing at the end of September, declined 54.9% in 2018 but was still up 12.6% from late October 2017, when the market ended a correction that followed the 2016 elections: 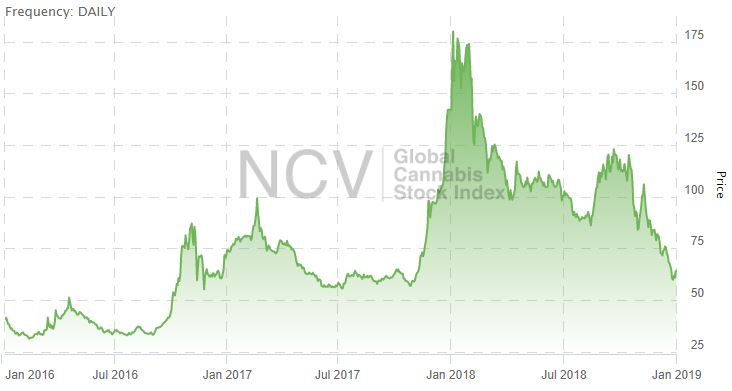 Despite the carnage, these 13 stocks rallied in 2018. In December, three stocks were able to overcome the negative market conditions to post gains:

Cronos Group gained on the announcement of an equity investment by Altria Group (NYSE: BUD).  Cannabis Strategic Ventures, a questionable company with a thin float (just 3.8 million shares) that caught the attention of traders earlier in the year, fell 50.4% during the quarter despite the bounce in December. The company doesn’t file with the SEC, and, despite minimal revenue and equity of just $4.1 million, trades with a market cap of $584 million. Auxly, which was previously Cannabis Wheaton, ended the year with a 51.5% decline in its price, with no news to account for the late-in-the-year bounce.

Terra Tech was charged in a lawsuit with alleged fraud that it subsequently denied.  The company struggled in California this year as the state transitioned to the new regulations, leading revenue to decline in Q3. For the full year, the stock dropped 90.3%. Weed, Inc. was a company with questionable fundamentals that ran up sharply earlier this year only to end the year down 82.8%. Despite the drop, it still sports a market cap of $110 million despite equity of just $2.8 million and no revenue. Namaste Technologies, a big winner in 2017, plunged into year-end as CEO Sean Dollinger unloaded nearly 3 million shares on December 20th. For 2018, the stock dropped 75.2%. Invictus MD Strategies, which announced the acquisition of another Canadian LP, its third, and the pending acquisition of publicly-traded GTEC Holdings (TSXV: GTEC) (OTC: GGTTF) in November just days after its founding CEO Dan Kriznic departed abruptly, lost 60.3% in Q4.

At the close on December 31st, the index was rebalanced, with 26 names dropping out and 8 joining, leaving the index with 43 members. Most of the exits were due to trading volume that slipped below the minimum, though several stocks also fell below the minimum price of $.25. In general, many of the names departing were of relatively low quality. Most of the entrants recently began trading publicly, with several generating substantial revenue. The complete list of index members is available here, and here are the changes: