While the Canadian Cannabis LP Index continued to lag the broader sector, it posted strong gains in November as it increased 23.6% to 288.97:

The index, which closed at a four-month high, is now down 28.6% over the past year:

Among these largest LPs by revenue, Aurora Cannabis, the weakest stock thus far in 2020, was the best performer, soaring 184%, while HEXO Corp gained 77%, Aphria rose 82%, and Canopy Growth increased 49%.

The worst performer in this tier included MediPharm Labs, down 30%, while TerrAscend gained 66%, Cronos Group rose 66% and Auxly increased 35%.

The returns for the overall sector varied greatly, with 6 names gaining more than 50% and 2 declining by more than 25%. The entire group posted a median return of 8.6%: 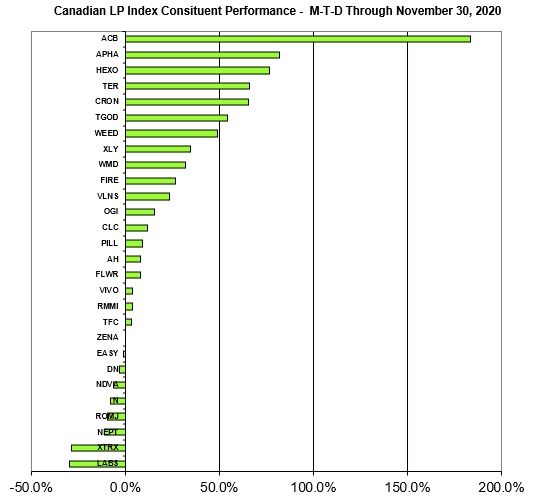