Canopy Growth moved to acquire Supreme Cannabis earlier this month, paying a substantial 66% premium to the prior day’s close. The company cited Supreme’s premium brands and its success in the adult-use market as motivation for the C$435 million all-stock deal. Our recent interview with CEO Beena Goldenberg captured the success she has enjoyed in her short tenure as Supreme’s CEO.

Canopy’s move follows several similar acquisitions by its competitors. Aphria bought Broken Coast in 2018, adding a leading craft cannabis cultivator. Vivo Cannabis bought Canna Farms later that year. Aurora bought Whistler Medical in early 2019. More recently, IM Cannabis announced the pending purchase of Highland Grow. All of these deals were predicated on the idea that over time premium brands and products will resonate with customers and create profitable business. Another pending merger in Canada between HEXO Corp and Zenabis for C$235 million in stock was based upon European expansion, cost synergies and economical capacity expansion. Additionally, Valens recently acquired LP LYF Food Technologies, and Organigram purchased The Edibles & Infusions Corporation. Both of these transactions had a goal of taking advantage of growth in the growing edibles market.

The Canadian market continues to grow, but only a few public companies seem to have been able to capitalize on its success. The structure of the market offers many potential challenges, as the LPs sell almost exclusively to provinces, leaving them with little pricing power given the monopoly buyer. Excess capacity is another issue, as many LPs overbuilt and are now underutilizing their facilities. This week, Organigram reported an adjusted gross margin of -5%. Market-share leader Aphria reported a cannabis gross margin of just 39%. The company has too much inventory and too much capacity. It issued C$53 million in shares this month to its JV partners at Aphria Diamond to improve the terms of the supply agreement. Aurora Cannabis has now repurposed its large Aurora Sky facility, cutting production by 75% as it shifts its focus to premium cultivation.

We have shared here many times that retailers and smaller LPs are likely to outperform the large Canadian LPs, especially after the run-up early in the year. Quite simply, its very challenging for the large LPs to justify their market caps with whatever they do in the Canadian market. The valuations likely require success in markets outside of Canada, either the U.S. or Europe. Four months ago, we suggested select smaller LPs were better positioned for expansion of the adult-use market in Canada. The recent Canopy Growth pending acquisition certainly has validated this view, with Supreme Cannabis more than doubling and Canopy Growth relatively unchanged since then: 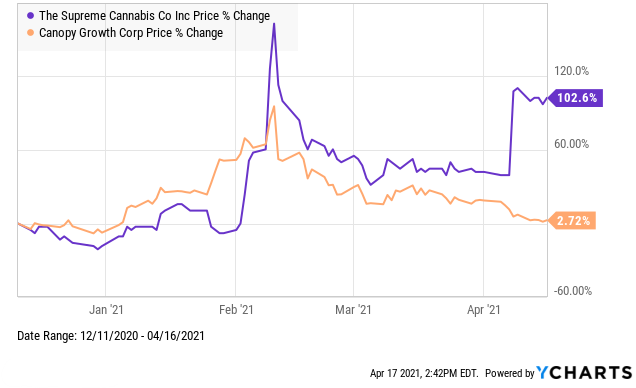 We expect that there could be continued consolidation in Canada and were encouraged to see the strategic investment by tobacco giant BATS into Organigram. While those who are able to figure out the next acquisition or strategic investment will probably enjoy good returns, we believe that investors can succeed in the Canadian market even without take-outs. Smaller, nimble and focused LPs that can execute on novel products or that can excel in the more profitable premium part of the flower and pre-roll market will likely create value for their shareholders over time as the Canadian market continues to evolve.

Get up to speed by visiting the Rubicon Organics Investor Dashboard that we maintain on their behalf as a client of New Cannabis Ventures. Click the blue Follow Company button in order to stay up to date with their progress.