This data-driven, fact-based tracker will continually update based on new financial filings so that readers can stay up to date. Companies must file with the SEC or SEDAR and be current to be considered for inclusion. When we launched this resource in May 2019, companies with quarterly revenue in excess of US$2.5 million qualified. As the industry has scaled and as more companies have gone public, we have raised the minimum several times subsequently, including a move to US$5 million in October 2019, to US$7.5 million in June 2020, to US$10 million in November 2020 and US$12.5 million in August 2021. Due to the rapid growth in the cannabis industry, we raised the minimum to US$25 million (C$33.4 million) to qualify for what we now call the senior list and introduced a junior list with a minimum of US$12.5 million (C$16.7 million) in September 2021.

In May 2019, we added an additional metric, “Adjusted Operating Income”, as we detailed in our newsletter. The calculation takes the reported operating income and adjusts it for any changes in the fair value of biological assets required under IFRS accounting. We believe that this adjustment improves comparability for the companies across IFRS and GAAP accounting. We note that often operating income can include one-time items like stock compensation, inventory write-downs or public listing expenses, and we recommend that readers understand how these non-cash items can impact quarterly financials. Many companies are moving from IFRS to U.S. GAAP accounting, which will reduce our need to make adjustments. Please note that our rankings include only actual reported revenue and not pro forma revenue. We also note that companies with non-cannabis operations must provide segment-level financial reports that detail not only revenue but also operating profit to be have their operating profit included in the tracker. Currently, Jazz Pharma (NASDAQ: JAZZ) and Tilray (TSX: TLRY) (NASDAQ: TLRY) aren’t providing this information. Please note as well that we updated how we are handling Canopy Growth (TSX: WEED) (NASDAQ: CGC), now excluding the non-cannabis revenue of BioSteel.

Valens, which was acquired recently by SNDL (NASDAQ: SNDL) has been removed from the junior list of companies that report in Canadian dollars. We expect to add additional companies in the months ahead, and, due to pending or recently completed mergers, we anticipate some removals as well. We note that Intercure (TASE: INCR) (NASDAQ: INCR), which reports in the Israeli currency, qualifies for the junior list, but we haven’t yet added it due to its different reporting currency.

Included Companies That Reported in December or January

Since our last update, there haven’t been many companies that have reported, and we had no new additions to the rankings.

Tilray Brands (NASDAQ: TLRY) (TSX: TLRY), the only company on the senior list to report since our last update, reported its Q2 ending in November this month, and it was worse than expected for overall revenue and adjusted EBITDA. Cannabis revenue, a minority of overall sales, fell 15% sequentially and from a year ago. 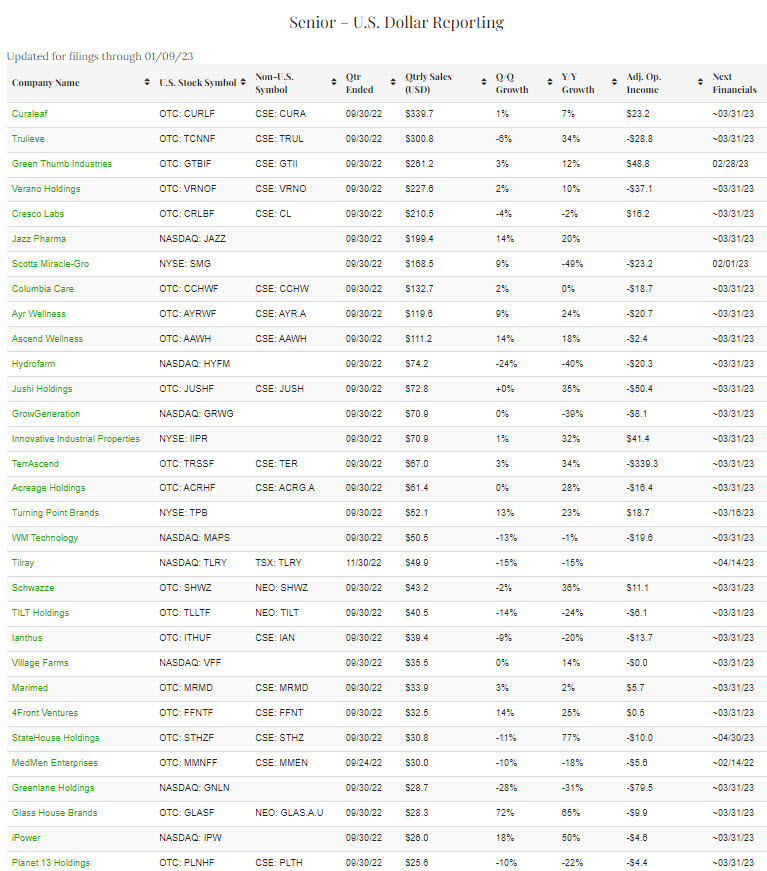 Scotts Miracle-Gro (NYSE: SMG) will report its Q1 on 2/1. The company, according to the consensus calculated by Sentieo, is expected to see overall revenue pick up 2% sequentially while falling 11% from a year ago to $504 million. Analysts project adjusted EBITDA of -$27 million. Most of the other cannabis companies with years ending in December will not be required to report until March, but Green Thumb Industries (OTC: GTBIF) (CSE: GTII) has scheduled its release and a call for 2/28. The company is expected to see Q4 revenue slip 2% sequentially to $257 million, up 5% from a year ago. Analysts project adjusted EBITDA will increase 6% from a year ago to $80 million.

There were no reports since our last update, and there are no calls scheduled for February.

Organigram (NASDAQ: OGI) (TSX: OGI) put up a solid report recently for its Q1. Revenue fell a bit sequentially, but it rose 43% from a year ago. The company generated cash from its operations. Other companies that reported in December included HEXO Corp. (NASDAQ: HEXO) (TSX: HEXO) and Fire & Flower (OTC: FFLWF) (TSX: FAF). HEXO results were well below expectations for its Q1, and Fire & Flower fell a bit below expectations for its Q3. 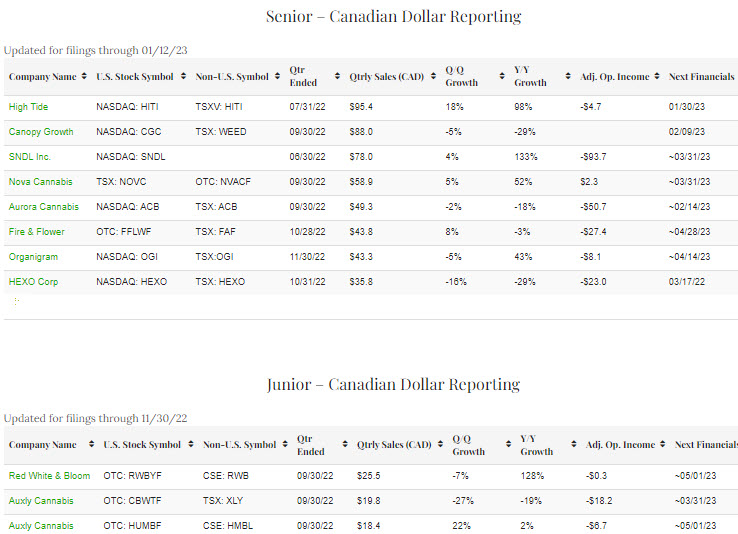