The Public Cannabis Company Revenue & Income Tracker, managed by New Cannabis Ventures, ranks the top revenue producing cannabis stocks that generate industry sales of more than US$7.5 million per quarter (C$9.9 million). This data-driven, fact-based tracker will continually update based on new financial filings so that readers can stay up to date. Companies must file with the SEC or SEDAR to be considered for inclusion. Please note that we raised the minimum quarterly revenue in May from US$2.5 million and from US$5.0 million in October.

45 companies currently qualify for inclusion, with 29 filing in U.S dollars and 16 in the Canadian currency, which is the same as when we reported at the end of December.

For companies that report in U.S. dollars, only KushCo Holdings (OTC: KSHB) provided updated financials during January.  The company saw the vaping crisis take a toll in the near-term, as revenue dipped 26% during its fiscal Q1 ending November 30th from the prior quarter, though sales still grew 38% organically from the prior year. The company reaffirmed the guidance it had previously provided in early November for FY20 revenue to be in the range of $230-250 million. 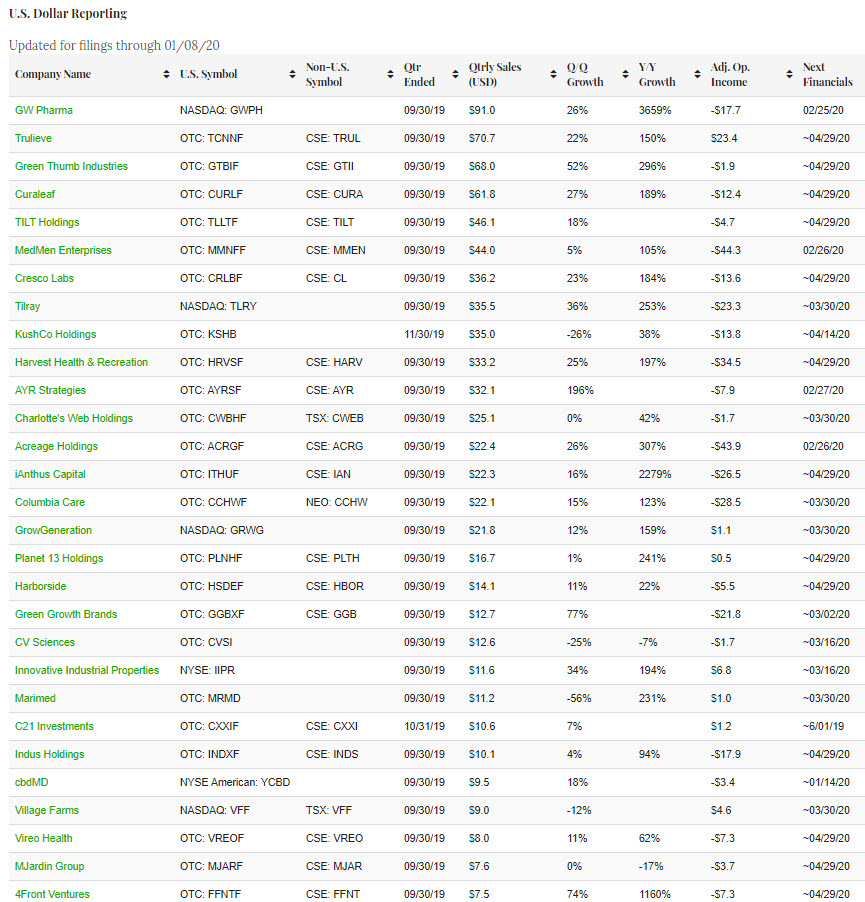 During February, we expect reports from Acreage Holdings (CSE: ACRG) (OTC: ACRGF), AYR Strategies (CSE: AYR) (OTC: AYRSF), GW Pharma (NASDAQ: GWPH) and MedMen Enterprises (CSE: MMEN) (OTC: MMNFF). Acreage has scheduled a call for its Q4 financials on February 26th, while AYR Strategies will discuss its Q4 financials the following day. GW Pharma pre-announced its Q4 revenue earlier this month, with its preliminary estimate that it will be  $108 million, which would represent growth of 19% sequentially. A year ago, during a quarter that marked the launch of Epidiolex late in the quarter, the company generated revenue of $6.65 million.The company will host a call, as yet unscheduled, on February 25th.  MedMen will report its fiscal 2020 Q2 after the close on February 26th.

Of the companies that report in Canadian dollars, LPs Aphria (TSX: APHA) (NYSE: APHA) and Organigram (TSX: OGI) (NASDAQ: OGI), Florida operator Liberty Health Sciences (CSE: LHS) (OTC: LHSIF) and National Access Cannabis (TSXV: META) (OTC: NACNF) provided financial updates during January. Aphria fell short of expectations for revenue of C$130 million in its fiscal Q2, with the total of C$120.6  million including C$33.7 million of cannabis revenue and pharmaceutical distribution representing the balance at C$86.4 million. The company grew cannabis revenue sequentially by 9%. For the fiscal year ending in May, Aphria reduced revenue and EBITDA guidance to C$575-625 million and C$35-42 million, respectively. Previiously, the company had forecast revenue to be C$650-700 million, with EBITDA at C$88-95 million. Organigram’s Q1 revenue sharply exceeded expectations of C$21.3 million as the company resumed growth after a weak Q4. Wholesale revenue accounted for about 36% of its overall revenue. Liberty Health continued its strong growth, which was driven by an increase in the number of dispensaries. The company accelerated its profitability from the prior quarter, with adjusted operating earnings equaling about 15% of sales. National Access (dba Meta Growth) had experienced flat sequential revenue growth in its fiscal Q4 ending August 31st, and, despite having more stores open during its fiscal Q1 ending November 30th, the company saw revenue decline by 7% as its operating loss expanded. 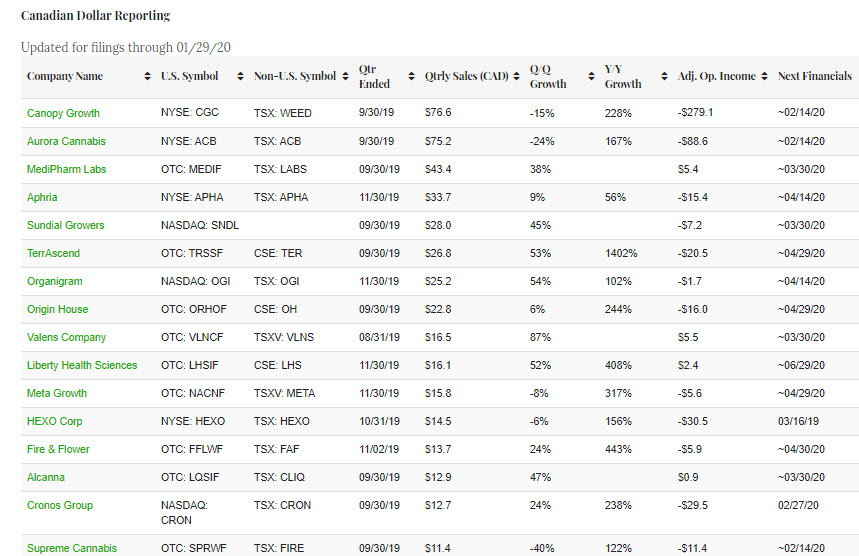 During February, we expect financial updates from LPs Aurora Cannabis (TSX: ACB) (NYSE: ACB), Canopy Growth (TSX: WEED) (NYSE: CGC), Cronos Group (TSX: CRON) (NASDAQ: CRON) and Supreme Cannabis (TSX: FIRE) (OTC: SPRWF). Aurora Cannabis, according to Sentieo, is expected to see revenue expand to C$81 million in its fiscal Q2 from the prior quarter, while Canopy Growth is expected to maintain the leadership among LPs with fiscal Q3 revenue reaching a record C$104 million. Neither company has scheduled their conference calls yet. Analysts project Q4 revenue for Cronos Group to have been $17.4 million, which would represent growth of 37% from the prior quarter. The company has scheduled a call for February 27th. Supreme Cannabis is expected to have generated revenue of $11 million in its fiscal Q2, similar to the results from its first quarter. The company will report on February 13th.