The Public Cannabis Company Revenue Tracker, managed by New Cannabis Ventures, ranks the top revenue producing cannabis stocks that generate industry sales of more than US$5.0 million per quarter. This data-driven, fact-based tracker will continually update based on new financial filings so that readers can stay up to date. Companies must file with the SEC or SEDAR to be considered for inclusion. Please note that we raised the minimum quarterly revenue in May from US$2.5 million, and we anticipate a further increase from US$5.0 million at the end of September.

54 companies currently qualify for inclusion, with 33 filing in U.S dollars and 21 in the Canadian currency, which is up from 49 just two weeks ago. Since our last report in mid-August, the new additions include U.S. dollar reporting companies Harborside (CSE: HBOR) (OTC: HSDEF), Indus Holdings (CSE: INDS) (OTC: INDXF) and Vapen MJ (CSE: VAPN) (OTC: VAPNF) and Canadian dollar reporters, including Canadian LPs Delta 9 Cannabis (TSXV: DN) (OTC: VRNDF) and WeedMD (TSXV: WMD) (OTC: WDDMF),  ancillary services provider 3 Sixty Secure (CSE: SAFE) (OTC: SAYFF) and CPG company SLANG Worldwide (CSE: SLNG) (OTC: SLGWF). We also removed Canadian dollar reporters Isodiol International (CSE: ISOL) (OTC: ISOLF) and Sunniva (CSE: SNN) (OTC: SNNVF) after both reported quarters that were below the minimum qualifying level. We are not able to include Elixinol Global (ASX: EXL) (OTC: ELLXF) and Greenlane (NASDAQ: GNLN), which would otherwise qualify but don’t break out their cannabis-related revenue. We also note that Scotts Miracle-Gro (NYSE:SMG) derives substantial cannabis-related revenue through its Hawthorne Gardening operations, but we are unsure of the exact amount and, thus, aren’t including it at this time. 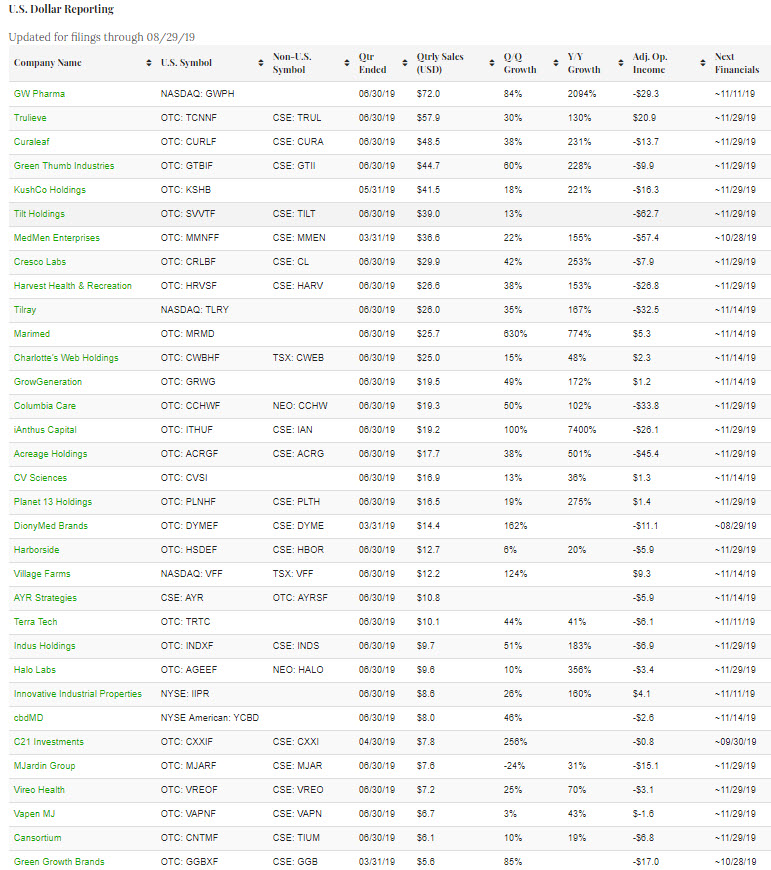 One company that didn’t meet the deadline for August is DionyMed Brands (CSE: DYME) (OTC: DYMEF), which anticipates, according to its CFO, that it will release its financials later today. In September, we expect to see Financials from C21 Investments (CSE: CXXI) (OTC: CXXIF).

Of the companies that report in Canadian dollars, Origin House (CSE: OH) (OTC: ORHOF) and TerrAscend (CSE: TER) (OTC: TRSSF) were the only ones that reported in excess of C$15 million, with the four additions to the list all below C$9 million. TerrAscend upped its full-year guidance to C$141 million from C$135 million. 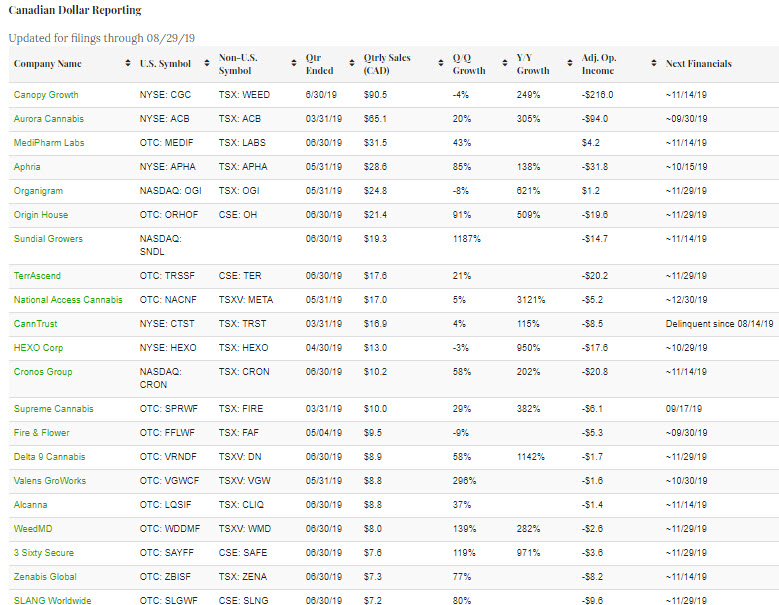 In September, companies expected to report financials include Supreme Cannabis (TSX: FIRE) (OTC: SPRWF), which has announced the date already (9/17), as well as Aurora Cannabis (TSX: ACB) (NYSE: ACB) and Fire & Flower (TSX: FAF) (OTC: FFLWF). We note that CannTrust (TSX: TRST) (NYSE: CTST) missed its Q2 filing deadline in mid-August. Supreme pre-announced Q4 revenue of approximately C$19 million and gave preliminary guidance for its fiscal 2020 for sales of C$150-180 million. According to Sentieo, Aurora Cannabis is projected to report Q4 revenue of C$106 million. The company pre-announced Q4 cannabis revenue of $90-95 million on August 6th, which could put it at the top of the list of companies that report in Canadian dollars.