The Public Cannabis Company Revenue & Income Tracker, managed by New Cannabis Ventures, ranks the top revenue producing cannabis stocks that generate industry sales of more than US$10 million per quarter (C$13.6 million). This data-driven, fact-based tracker will continually update based on new financial filings so that readers can stay up to date. Companies must file with the SEC or SEDAR and be current to be considered for inclusion. Please note that we raised the minimum quarterly revenue several times, including from US$7.5 million in June 2020, from US$5.0 million in October 2019 and from US$2.5 million in May 2019.

35 companies currently qualify for inclusion, with 21 filing in U.S. dollars and 14 in the Canadian currency, which is down from 46 when we reported in early June. In the U.S., we added Scotts Miracle-Gro (NYSE: SMG) after reassessing our prior decision to exclude it due to our concern that we couldn’t verify that Hawthorne Gardening segment was entirely cannabis-related. We also removed five names that fell below the revised minimum, including cbdMD, Cronos Group, CV Sciences, Indus Holdings and MJardin. Additionally, we removed Harborside and iAnthus, which missed filing deadlines, and Green Growth Brands, which is in bankruptcy and shuttered part of its operations. In Canada, we have removed four that fell below the minimum, including Delta 9 Cannabis, MediPharm Labs, Radient Technologies and Zenabis. Some companies have taken advantage of revised filing deadlines that have been extended due to the pandemic.

Tilt Holdings actually reported both its December and March quarters during the month. Its Q4 was negatively impacted by the vaping crisis, but revenue bounced back in Q1, with the company reporting revenue in excess of $42 million, up 23% from a year ago as it reduced its operating loss. Acreage Holdings expanded reported revenue by 18% sequentially in its March quarter, while its operating loss expanded, due primarily to write-downs included in its GAAP earnings. 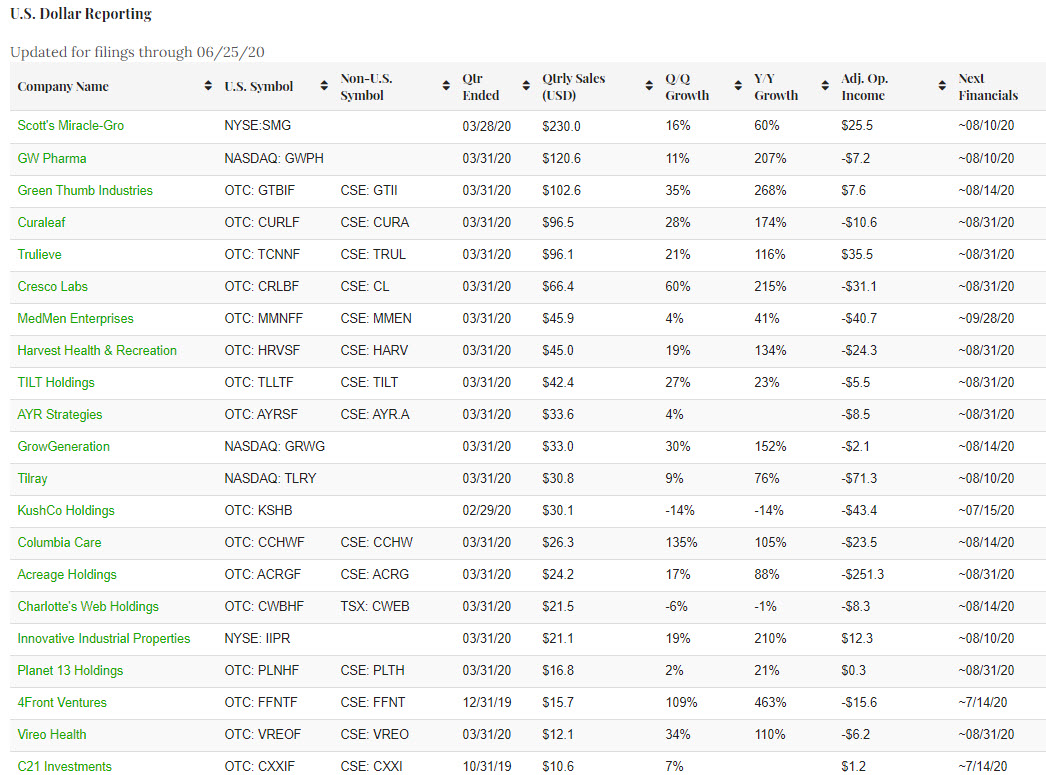 During July, 4Front Ventures, C21 Investments (CSE: CXXI) (OTC: CXXIF) and KushCo Holdings (OTC: KSHB) are expected to provide financial reports. C21 will be reporting its results for the fiscal year ending 1/31. 4Front will report its Q1 ending 3/31, and KushCo will report its fiscal Q3 ending 5/31.

KushCo Holdings, according to Sentieo, is expected to see revenue grow  3% sequentially to $31.1 million, with forecasts ranging from $29.0 million to $36.2 million. 4Front indicated in June that it expects to report revenue of $17.1 million. C21 pre-announced revenue of $9.5 million, suggesting it will be removed from the list. 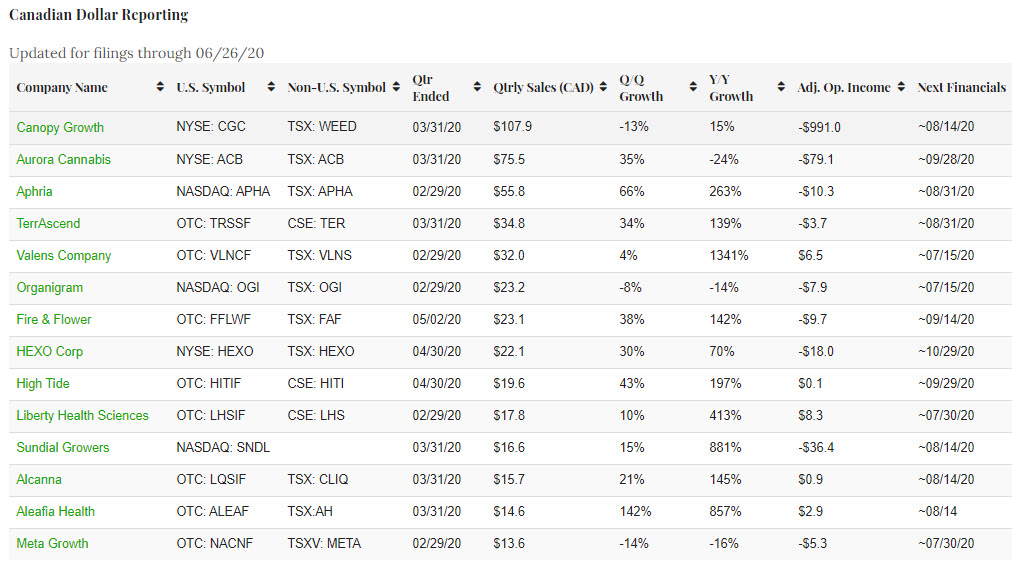 Note: This article has been edited to reflect an error regarding the consensus outlook for High Tide, with the previous reference removed