The Ohio Medical Cannabis program has been slow to develop, as we detailed in February, but data released by the Ohio Medical Marijuana Control Program indicates that the pace of sales has accelerated recently, with weekly sales now in excess of $3 million. Through April 12th, year-to-date sales have been approximately $42 million, suggesting that the annual sales could approach $200 million.

For the first time, the state has released historical sales data by the week back to the April 30, 2019. During the last week of February, the weekly sales crossed the $3 million threshold for first time. It appears that there may have been some stocking up during March, but the pace remains above that level: 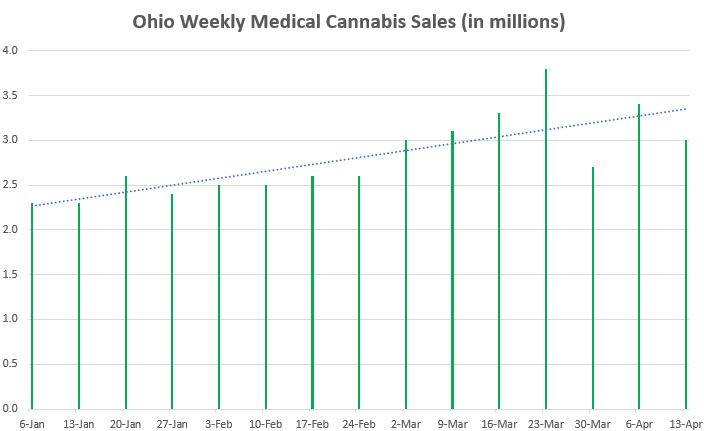 Over the past two months, the number of physicians authorized to recommend medical cannabis has remained constant at 590, but the number of patients has expanded since year-end from 78,376 to 94,356, which is driving the growth.

The number of operating cultivators, 20, hasn’t changed since we reviewed the market in February, while the number of dispensaries in operation has increased by two since then to 51. The number of processors has expanded by one to 17.