44 companies currently qualify for inclusion, with 27 filing in U.S dollars and 17 in the Canadian currency, which is the same as when we reported in mid-April. Several companies that had been expected to report by the end of April have taken advantage of an extended deadline to accommodate delays due to the COVID-19 crisis, including six that report in U.S. dollars and one that files in Canadian dollars. We expect some delays in Q1 reporting as well.

In May 2019, we added an additional metric, “Adjusted Operating Income”, as we detailed in our newsletter. The calculation takes the reported operating income and adjusts it for any changes in the fair value of biological assets required under IFRS accounting. We believe that this adjustment improves comparability for the companies across IFRS and GAAP accounting. We note that often operating income can include one-time items like stock compensation, inventory write-downs or public listing expenses, and we recommend that readers understand how these non-cash items can impact quarterly financials. Many companies are moving from IFRS to U.S. GAAP accounting, which will reduce our need to make adjustments. 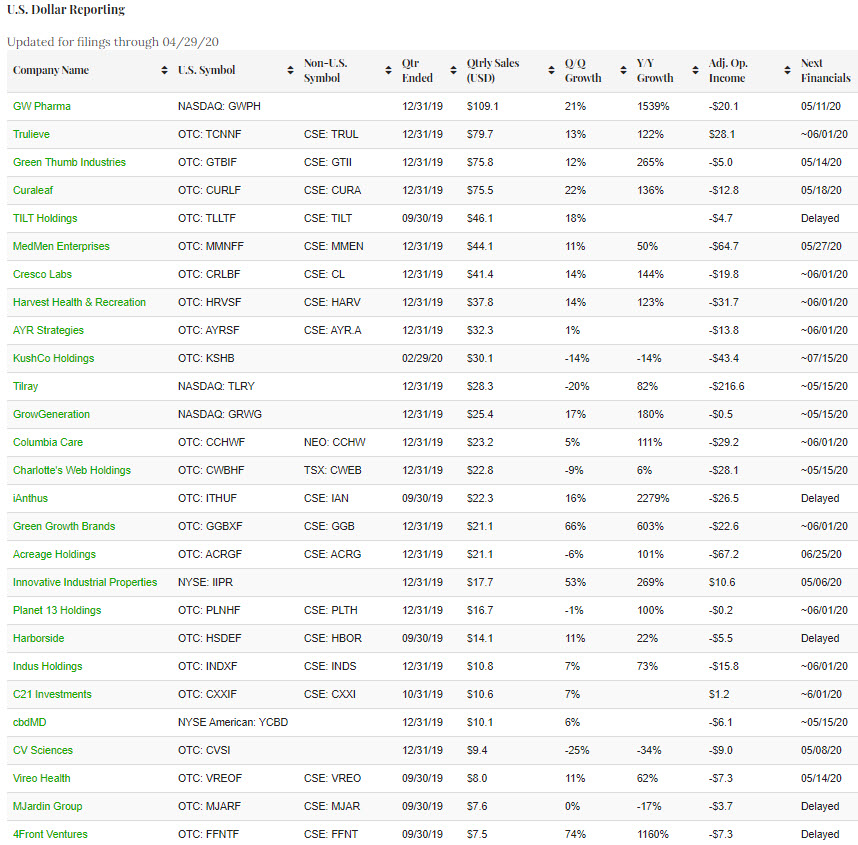 GW Pharma, according to Sentieo, is expected to have generated revenue of $108 million, down 1% from Q4 but up about 175% from a year ago. Analyst forecasts range from $95 million to $112 million. The company discussed seasonal factors that weigh upon Q1 on its conference call in February. The company reports on May 11th.

GTI, which reports on May 14th, is expected to increase revenue by 22% compared to Q4 to $92.1 million, which would be 230% above year-ago sales. Q1 includes the first sales of adult-use cannabis in Illinois. The company guided in late March for revenue to increase 20-25% sequentially.

Tilray and GrowGeneration haven’t yet scheduled earnings calls. Tilray is expected to see overall revenue increase 8% to $50.6 million. The company generates most of its revenue from its Canadian LP operations, but it also includes sales of hemp food products and a small amount of CBD sales in the U.S. GrowGeneration, which guided for full-year revenue of $130-135 million and Q1 at $$31.5-32.5 million when it reported Q4 on March 30th, is expected by analysts to have generated $31.6 million revenue in Q1, up 24% sequentially. Analysts also project EPS of $0.03.

Charlotte’s Web is expected to see a sequential decline in revenue to $20.8 million, which would represent -4% growth from a year ago. On March 24th, when it released Q4 financials, it guided to revenue of about $20 million. For the full year, the company projected revenue growth of 10-20% above 2019 revenue of $94.6 million.

Innovative Industrial Properties will report on May 6th after the close and host a call on the 7th. Analysts expect revenue to increase 21% from Q4 to $21.4 million. This would represent 214% growth from a year ago. The company has raised a substantial amount of capital over the past two quarters, which has increased the share count and will dampen EPS growth in the near-term. Analysts project Q1 EPS will decline by 4% from Q4 to $0.75, which represents 127% growth from a year ago.

Among the companies that haven’t yet filed Q4 financials, TILT Holdings (CSE: TILT) (OTC: TILTF), which hasn’t yet announced the date, is projected to have generated $47 million in revenue, up 2% from Q3 as the company was likely impacted during the quarter by the vaping crisis. Vireo Health (CSE: VREO) (OTC: VREOF), which will host a call on May 14th to discuss its Q4 results, is projected by analysts to have generated $8.9 million, up 11% from Q3.

For many of these companies, we publish comprehensive earnings previews for subscribers at 420 Investor.

Of the companies that report in Canadian dollars, TerrAscend (CSE: TER) (OTC: TRSSF) experienced strong growth in its U.S. operations, which represented 93% of revenue, but saw a decline in its Canadian operations due to a write-down of inventory, with overall revenue falling 3% from Q3 but increasing 414% from the prior year on the back of acquisitions in California and Pennsylvania. The company guided to Q1 revenue of C$35 million. Fire & Flower (TSX: FAF) (OTC: FFLWF) beat analyst expectations as it wrapped up its fiscal year, with revenue growing 23% sequentially to C$16.8 million. 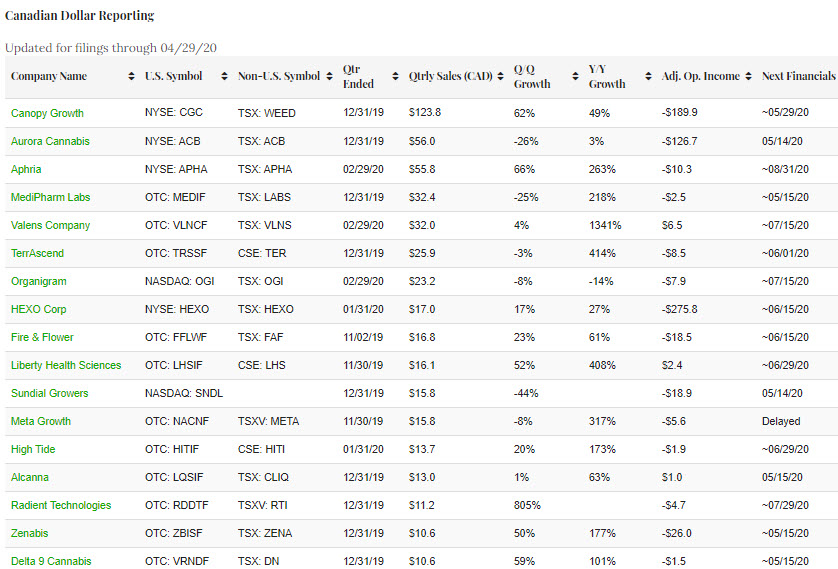 During the first half of May, we will receive updates from Aurora Cannabis (TSX: ACB) (NYSE: ACB), MediPharm Labs (TSX: LABS) (OTC: MEDIF). Sundial Growers (NASDAQ: SNDL), Alcanna (TSX: CLIQ) (OTC: LQSIF), Zenabis (TSX: ZENA) (OTC: ZBISF) and Delta 9 Cannabis (TSX: DN) (OTC: VRNDF), all of which are reporting their Q1 financials except for Aurora Cannabis, which will be detailing its fiscal Q3 results.

Aurora Cannabis is expected, according to Sentieo, to see revenue rise 18% from fiscal Q2 to C$66.2 million, which would be up just slightly from a year ago. The company, which has scheduled its call for May 14th, reaffirmed prior guidance on April 13th that its revenue will show “modest growth” relative to fiscal Q2, suggesting that the consensus may be too aggressive.

MediPharm Labs is expected to see its second consecutive sequential quarterly decline in revenue, with analysts projecting revenue of C$24.6 million, which would represent 12% growth from a year ago. Sundial, which has scheduled a call for May 14th, is expected to report overall revenue of $22.4 million, up modestly from Q4. The company generates substantial non-cannabis revenue. The vast majority of Alcanna’s revenue is from the sale of alcohol, and its Q1 revenue is expected to be $163 million, up 9% from a year ago.

Meta Growth is expected to have generated revenue of C$14.5 million for its fiscal Q2 ending in February, a decline sequentially from its fiscal Q1.

For many of these companies, we publish comprehensive earnings previews for subscribers at 420 Investor.