Investing in the cannabis industry has never been easier, and, while still quite risky (stay tuned for an update on this one), it’s getting better, with a dozen companies on track to exceed $10mm in annual revenue. For investors who desire the ability to buy a diversified portfolio in a single security, there are still only two options, both of which we have discussed previously, including mutual fund American Growth Fund Series Two E (AMREX) and Horizons Marijuana Life Sciences Index ETF (TSX: HMMJ) (OTC: HMLSF).

AMREX has been a complete disaster, with a year-to-date decline of 26.6%, worse than the 20.5% loss in the Cannabis Stock Index. We warned readers in December:

There is no doubt that a mutual fund for cannabis stocks would be appealing to many investors, but, unfortunately, AMREX, while novel, doesn’t appear to be a smart choice. The fund’s cost structure is an expensive burden that owners will bear, the holdings don’t represent the industry very well, its managers don’t appear to be particularly qualified, and the performance has been abysmal.

Here is its performance over the last year, with the price declining 27% at a time when the Cannabis Stock Index actually increased 66% (due to a big pre-election rally):

The company provided a semi-annual update in June, disclosing its holdings as of 4/30/17. In six months, assets in the fund fell from $672,565 to $522,257, or 22.4%. This asset base is too low to be sustainable, and its poor performance is likely to make it very difficult to attract new investors.  We criticized the fund for many of its holdings, including some very large-cap companies with minimal, if any, exposure to the cannabis industry, including Abbott Labs (NYSE: ABT) and Merck (NYSE: MRK), and, subsequently, the company added Microsoft (NASDAQ: MSFT) and even Valeant Pharma (NYSE: VRX). Investors should avoid AMREX in my view.

HMMJ, which trades on the Toronto Stock Exchange, is run by a very professional organization, but its performance has been hurt by both the timing of its launch as well as its construction. We recently explained how its high reliance upon biotech stocks that aren’t necessarily leveraged to cannabis (some are synthetic) has hurt performance. Ironically, biotech stocks, as measured by the ETF’s iShares NASDAQ Biotech (NASDAQ: IBB) and SPDR S&P Biotech (NYSE: XBI), have performed very well since HMMJ launched on the TSX in early April: 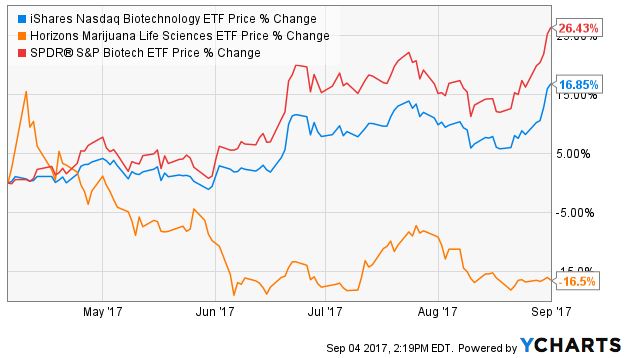 This poor performance actually is mitigated somewhat if one were to look at HMMJ in terms of U.S. dollars, as the Canadian dollar has appreciated by 8.2% since then. In fact, there is now a U.S. dollar-based symbol for the ETF, HMMJ.U on the Toronto Stock Exchange, since mid-June.

To its credit, HMMJ assets remain robust, at over C$120mm, and the liquidity is reasonable despite the 14.4% decline in the price since its $10 IPO and the 31% decline since the peak a few days later: 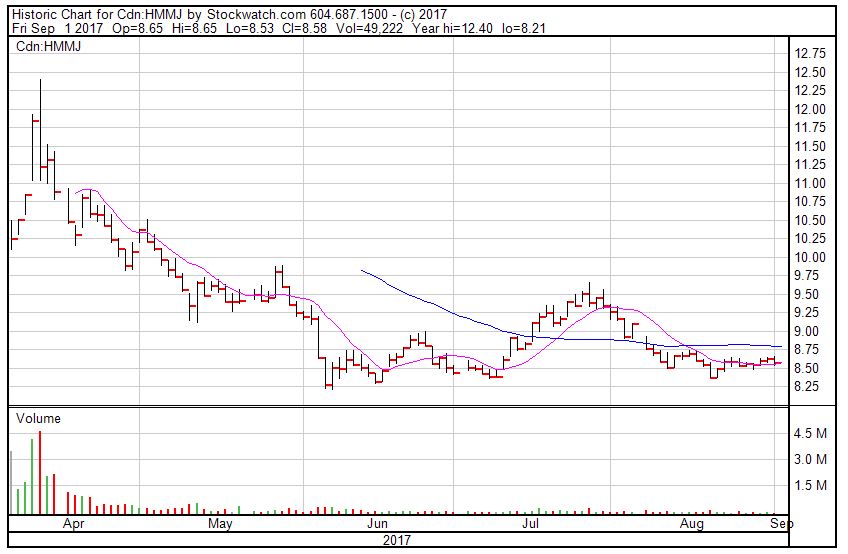 Investors can learn more about HMMJ here. According to the prospectus, the index will be rebalanced later this month.

Solactive, the index provider of the North American Marijuana Index, provides guidelines for the index that were updated as of September 1st:

The composition of the Index is adjusted on the 3rd Friday of March, June, September and December each year.

The composition of the Index is reviewed on the Selection Day, which is eight Business Days before the Adjustment Day.

HMMJ provides a complete list of its holdings here, and the top holdings as of 8/30 included: 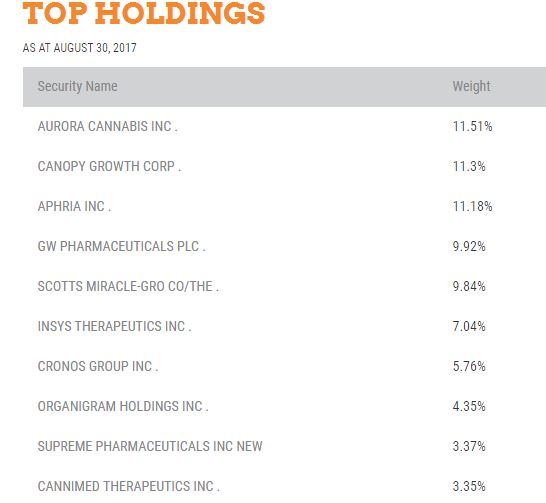 Perhaps it’s too early to judge the HMMJ ETF, but we continue to view it as being poorly constructed, though it includes some leading companies. Due to the exclusion of U.S. ancillary companies, it is missing a part of the market that we find to be growing rapidly and generating substantial revenue. While Scotts Miracle-Gro (NYSE: SMG) has a small bit of its overall exposure to the cannabis industry (though a large dollar number), Horizons is diluting exposure by including it (yes, it’s a “grass” stock!). Insys (NASDAQ: INSY) is a terrible choice in our view, and the bulk of the rest of the exposure in the index is to Canadian LPs. We believe investors interested in that space should perhaps bypass the 0.75% management fee and create their own portfolio of individual stocks if they want exposure to this group. For those interested in the Canadian LPs, we suggest this resource.

There have been several other announced potential ETFs, but none have yet launched. While we are optimistic in the longer-term that there will be investment vehicles worth consideration, we are concerned that federal illegality in the U.S. will continue to put a damper on their creation. We point to the debacle at First Trust, which filed a prospectus three months ago and named Mellon as Trustee. We received a takedown request from Brett Philbin, a VP at p.r. firm Edelman on behalf of Mellon the day after we published an article describing the ETF prospectus, and days later, First Trust amended its prospectus, removing Mellon without naming a replacement:

I have been contacted by several potential ETFs who are interested in engaging me as an advisor, but what I have learned has been discouraging. First, it will be difficult to find any trustee, an essential part of the creation and maintenance of the fund. Second, even if this is overcome, it will be challenging for quite some time to include most U.S. companies, even ancillary ones.

The bottom-line is that a well-constructed cannabis ETF or mutual fund would be great for investors and the industry, but it doesn’t yet exist. Investors should totally disregard AMREX, in our view, though HMMJ, while poorly constructed, may make sense for some investors who might not be able to build a diversified portfolio on their own.

This Could Be a Game Changer for American Cannabis Operators