Two Canadian LPs have reported so far in May. Last week, Aurora Cannabis (TSX: ACB) (OTC: ACBFF) reported 211% growth from a year ago during its fiscal third quarter, with the 45% growth in dried cannabis sales domestically boosted by exports to Europe the addition of oils and the acquisition of Larssen. The company closed on its acquisition of CanniMed late in the quarter and included 16 days of its sales. Yesterday, CannTrust (TSX: TRST) (OTC: CNTTF) reported 158% growth in its sales for the first quarter of 2018. The company saw 60% growth in its dried cannabis sales, while oils, which accounted for 57% of overall sales, soared 327%. Adjusted EBITDA declined from a year ago to -C$1.356 million from C$166,372. CannTrust ended the quarter with 42K patients. 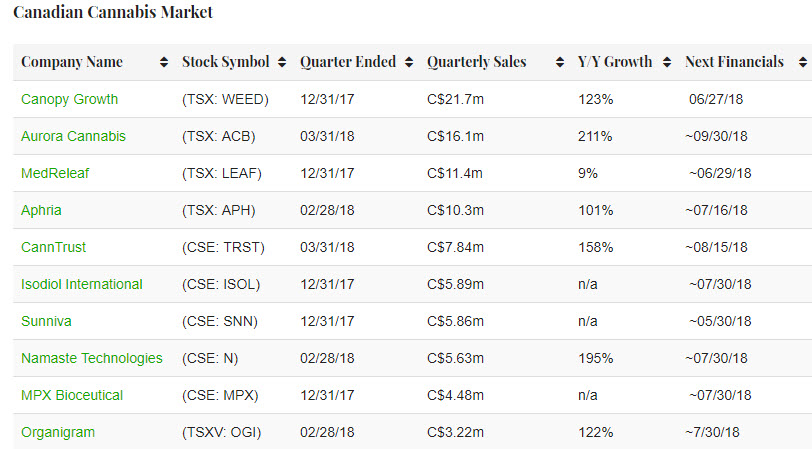 Over the balance of May, two companies will be providing quarterly updates, including  Sunniva (CSE: SNN) (OTC: SNNVF) in Canada and Golden Leaf Holdings (CSE: GLH) (OTC: GLDFF in the United States. We continue to expect this list to grow and are monitoring for additional companies that meet the qualifications.