Due to the rapid growth in the cannabis industry, we raised the minimum to US$25 million (C$31 million) to qualify for what we are now calling the senior list and introducing a junior list with a minimum of US$12.5 million (C$15.5 million) in September. At the time of our last update in early September, 35 companies qualified for inclusion, including 31 filing in U.S. dollars and 4 in the Canadian currency, and this remains the number of qualifying companies. The junior list continues to include 12 reporting in U.S. dollars and 6 in Canadian dollars. On a combined basis, the Public Cannabis Company Revenue & Income Tracker includes 53 companies. We expect to add additional companies in the months ahead, and, due to pending or recently completed mergers, we anticipate some removals as well.

Since our last update on  MedMen (CSE: MMEN) (OTC: MMNFF) reported financials for companies reporting in American dollars. The Q4 financials included revenue from its operations in Arizona that had been previously considered discontinued operations. The company made progress on both revenue and profitability, but its operating loss remains quite high relative to peers. 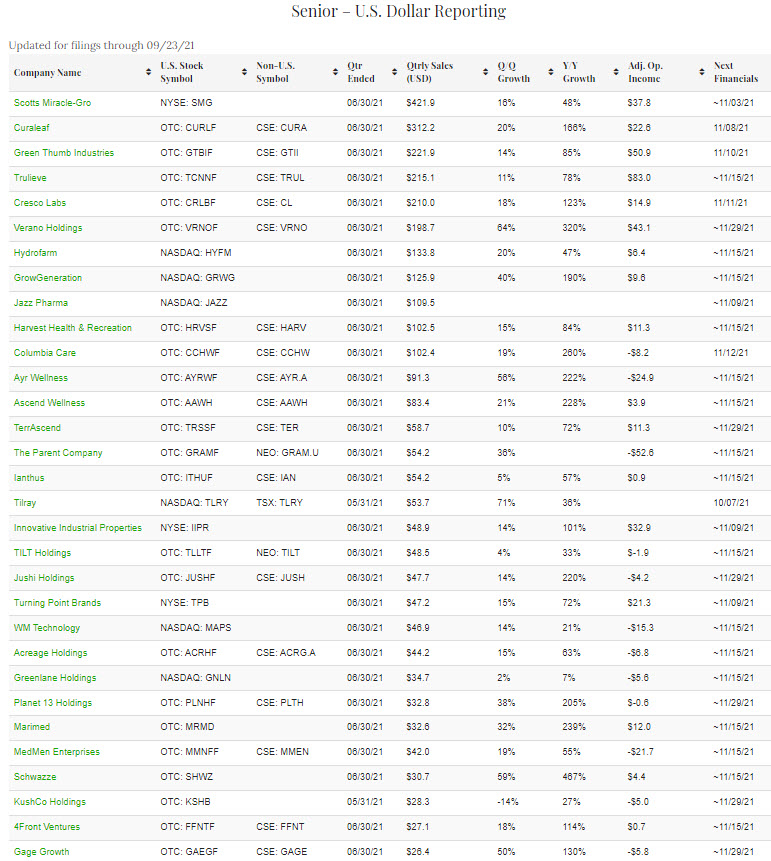 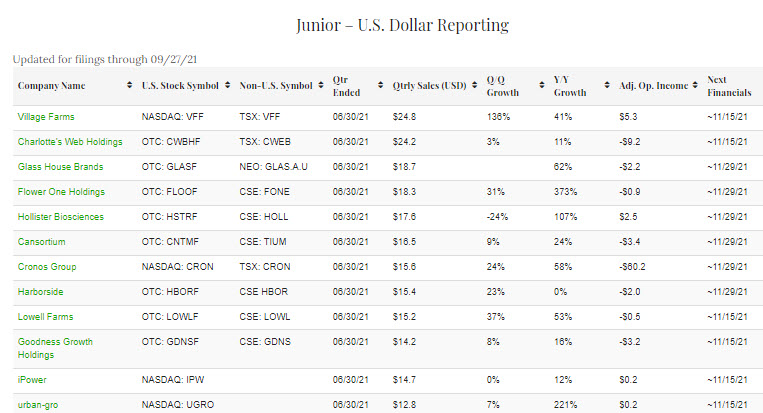 The only company reporting in American dollars during October will be Tilray.  According to Sentieo, analysts expect it to have generated revenue of $175 million in its fiscal Q1 ending in August. This would be up 49% compared to a year ago, when the company’s financials included only legacy Aphria results. In Q4, the company’s results included a full quarter of legacy Aphria but only a month of legacy Tilray. Note that the majority of the company’s revenue is non-cannabis, including pharmaceutical distribution, alcohol and hemp food. Analysts expect adjusted EBITDA to be $13 million, with EPS at -$0.08. Data from Hifyre suggests that the company’s Canadian adult-use sales for the High Park and Aphria products grew only 1% from Q4 during Q1 compared to the overall market growth of 9%.

For those interested in more information about companies reporting in October, we publish comprehensive earnings previews for subscribers at 420 Investor, including for Focus List members mentioned here, Tilray and Valens.