The Public Cannabis Company Revenue & Income Tracker, managed by New Cannabis Ventures, ranks the top revenue producing cannabis stocks that generate industry sales of more than US$10 million per quarter (C$13.3 million). This data-driven, fact-based tracker will continually update based on new financial filings so that readers can stay up to date. Companies must file with the SEC or SEDAR and be current to be considered for inclusion. Please note that we raised the minimum quarterly revenue several times as the industry has scaled up, including from US$7.5 million in June 2020, from US$5.0 million in October 2019 and from US$2.5 million in May 2019.

39 companies currently qualify for inclusion, with 25 filing in U.S. dollars and 14 in the Canadian currency, which is up one from our update a month ago after iAnthus (CSE: IAN) (OTC: ITHUF) posted its delinquent Q2 financials and was able to rejoin. We are expecting several companies to qualify for inclusion after the Q3 reports.

In October, iAnthus, KushCo Holdings (OTC: KSHB) and MedMen (CSE: MMEN) (OTC: MMNFF) reported financials. iAnthus advanced revenue 14% sequentially as its operating loss narrowed in Q2. KushCo Holdings reported positive adjusted EBITDA and achieved its expense reduction goals as it transitioned to a strategy more focused on leading MSOs. Revenue expanded in its fiscal Q4 sequentially by 19%, and the company provided guidance for fiscal 2021 of revenue of $120-150 million with adjusted EBITDA of $5-7 million. MedMen also reported its fiscal Q4 financials and saw its business decline by 40% sequentially, which it attributed to the pandemic. Its expenses fell, but at a slower pace. 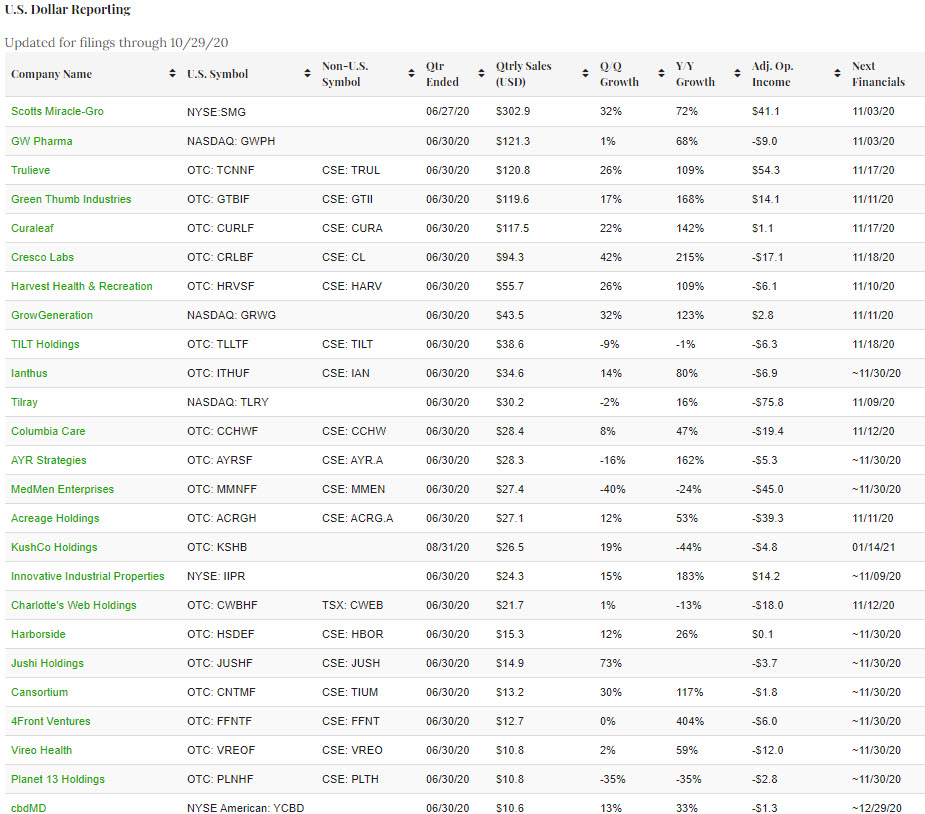 During November, almost all of the  companies will be reporting. In the first half of the month, some of the larger companies that will file financials include Scotts Miracle-Gro (NYSE: SMG), GW Pharma (NASDAQ: GWPH), Green Thumb Industries (CSE: GTII) (OTC: GTBIF), Harvest Health and Recreation (CSE: HARV) (OTC: HRVSF) and GrowGeneration (NASDAQ: GRWG).

According to Sentieo, Scotts Miracle-Gro is expected to have generated revenue of $889 million, which would be 79% higher than a year ago. The company has provided guidance for full-year revenue growth at Hawthorne to be 55-60%  when it reported its Q3, but it subsequently hiked guidance for the overall company for the full year from 26-28% to 30%, suggesting some upside perhaps. At 60% full-year growth, overall sales for Hawthorne would be $1.07 billion, suggesting that Q4 could see revenue of $341 million, up 12% sequentially. The $341 million would represent 62% growth from a year ago.

The analyst consensus for Harvest is revenue of $58 million, up 5% sequentially and 76% from a year ago. GrowGeneration provided full-year guidance after Q2 for revenue to exceed $170 million, with adjusted EBITDA to exceed $17 million. Analysts expect Q3 revenue to grow 9% sequentially to $47.4 million, which would be 118% above year-ago levels.

Aphria continued to outperform peers, with cannabis revenue advancing 18% sequentially and 103% from a year ago, but the company’s pharmaceutical distribution revenues fell short of expectations. HEXO also posted solid revenue growth sequentially that exceeded expectations but wrote down its production assets and some inventory. Additionally, the company announced a pending reverse split. Valens’ revenue was in line with expectations but grew only modestly. Liberty Health Sciences saw revenue decline slightly from the prior quarter. Data from Florida had suggested sales volumes had advanced, although more slowly than peers, so the decline was a bit surprising. 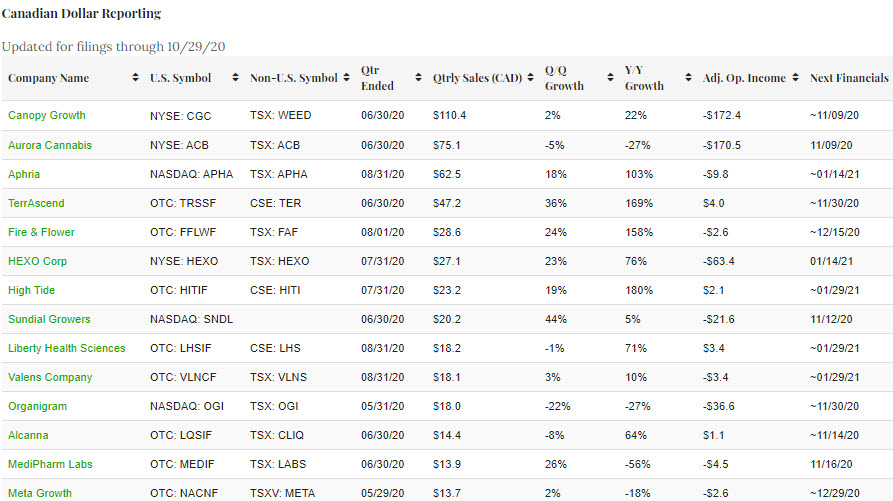 During the first two weeks of November, Canopy Growth (TSX: WEED) (NYSE: CGC) and Aurora Cannabis (TSX: ACB) (NYSE: ACB) are expected to report financials. Canopy Growth, which hasn’t yet scheduled a call, is expected to have generated revenue in its fiscal Q2 of C$117 million, which would represent growth of 6% sequentially and 7% from a  year ago. Analysts project the company to have generated an operating loss of C$155 million. Aurora, which will host a call to discuss its fiscal Q1 on 11/09, has provided some guidance, including revenue of nearly C$64 million. Investors should note that while the company reported revenue of C$75.1 million in fiscal Q4, subsequent divestitures result in a comparable prior revenue of $67.5 million. Analysts project revenue to be C$64 million with an operating loss of C$36 million.