Happy 4th of July! 2021 is already halfway behind us, and the year is playing out consistently with what we expected. Six months ago, we discussed 9 potential growth drivers for the sector, including expanded access to capital, new public company listings, an increased pace of mergers and acquisitions, a growing universe of cannabis investors, market share gains for the state-legal markets over the illicit market, additional states legalizing through the legislative process (so far Connecticut, New Mexico, New York and Virginia have done so), progress at the federal level, an improving Canadian market and an increasing focus beyond North America. We think that all of these drivers have developed as we expected, with the exception of progress at the federal level.

2021 has seen strong performance overall for cannabis stocks, but the gains took place early in the year as speculation heated up that federal legalization was becoming more imminent. Despite over four months of consolidation, the New Cannabis Ventures Global Cannabis Stock Index remains up 27.6% year-to-date. The stocks that benefited the most early in the year were the largest and most liquid ones, including Canadian LPs and several ancillary stocks. For the most part this has reversed out, with those stocks benefiting early in the year the most pulling back the most. The result has been that the largest Canadian LPs by market cap, with the exception of Tilray, which has benefited from its popularity with the meme stock crowd, have underperformed so far in 2021: 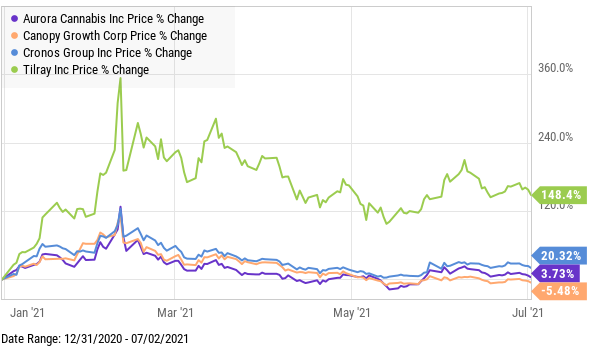 Looking ahead to the rest of 2021, we remain confident that the drivers we have highlighted will remain in force, especially on the M&A front. We have already seen extensive consolidation in both Canada and in the U.S. One thing that has surprised us regarding this activity has been the pick up in CBD company acquisitions. Going forward, we expect MSOs to continue to be active consolidators, though most of this activity is likely to be focused on the acquisition of private operators.

While there has been no progress yet on changes at the federal level, we continue to believe that comprehensive legislation will be introduced. Six weeks ago, we speculated that it might happen in June. Despite the continued delay, we are confident that Schumer will soon introduce legislation into the Senate. As we discussed then, this could be a major catalyst for the sector, even if for the wrong reasons. We remain hopeful that despite significant barriers to passage of major cannabis legislation, we can see some changes at the federal level that would be extremely positive for the cannabis sector. While the comments from Supreme Court Justice Clarence Thomas this week regarding federal laws being outdated have no weight legally, they could influence Republican legislators to modernize their own views. The Safe Banking Act falls far short of legalization, but it could, with some changes, be a game-changer. Specifically, language that allows major stock exchanges to permit state-legal cannabis companies to list would be perhaps the biggest catalyst that we could envision.

One area to watch over the next few months will be the cannabis sales growth rates across markets. The pandemic resulted in strong growth last summer, and there could be signs of slowing in certain markets in the months ahead. Even if this is the case, we expect growth will remain robust. Existing markets are seeing expansion of distribution in many states, and new markets will be opening up over the next several years.

We continue to be excited about the evolution of the cannabis stock sector, despite some of the continuing challenges that operators in the U.S. face, like relegation to the OTC markets and having to pay the onerous 280E tax. Years ago, the Global Cannabis Stock Index was dominated by companies that were highly speculative and poorly capitalized, with investors having to bet on only business plans. Today, the index has become more balanced and includes many names that have solid fundamentals. In about 5 weeks, earnings for Q2 will be released, and we expect continued evidence of high growth in revenue and profitability for many of the leading cannabis companies.

While many are frustrated with the performance of cannabis stocks over the past few months, we think that the bullish thesis is playing out so far in 2021. The consolidation has left many MSOs attractively valued, and we see opportunity in other sub-sectors as well. We have pointed to smaller Canadian LPs and Canadian retailers as likely to benefit from growth in the Canadian market, and last week we discussed ancillary cannabis stocks as a sub-sector that is gaining more attention due to the combination of strong liquidity and growth prospects.

Cresco Labs is a leading U.S. cannabis company with experienced management, access to capital and a demonstrated growth strategy. As a differentiated grower, processor and retailer of premium cannabis with operations in 9 states and 5,000+ SKUs in production, Cresco focuses on operating in markets with outsized demand potential, significant supply constraints and high barriers to entry. It has leading positions in California, Illinois and Pennsylvania. The company, which is covered by more than a dozen analysts, is expected to have generated revenue of $194 million in Q2, up 9% sequentially and 106% from a year ago. 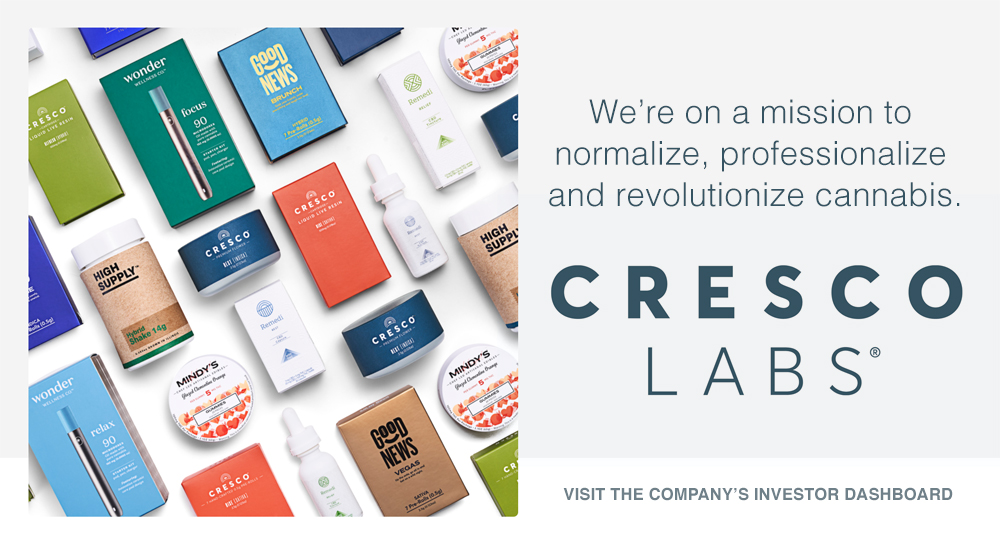