When the Senate changed hands earlier this year, the prospects for federal legalization suddenly shot up. On February 1st, Senate Majority Leader Chuck Schumer and fellow Democrat Senators Cory Booker and Ron Wyden issued a joint statement suggesting that they would be drafting comprehensive cannabis reform legislation. Almost four months later, this hasn’t yet happened. Boris Jordan suggested on Curaleaf’s Q1 conference call that the hold up is due to Schumer conferring with the FDA about its potential role. He stated that he expected the legislation to be introduced in May, which would mean this week. While the exact timing is uncertain, it’s quite apparent that legislation will be introduced soon and that this could be one of the most important moments to date for the cannabis industry and its investors. While progress has been made at several levels in the House of Representatives over the past few years, including passage again of the SAFE Banking Act on April 19th by a 321-101 vote, the Senate hasn’t even advanced legislation in any of its committees to date.

We think cannabis investors should be prepared to assess the legislation that is likely to be introduced imminently, as it could potentially bring traders into the space in the short-term, similar to what happened after Georgia run-off elections. What the legislation looks like could potentially change the way investors assess the long-term outlook as well, for better or for worse. Our view has been and remains that federal legalization has pros and cons for the current operators and that it will take a long time to play out. Ahead of what could be the next bit catalyst for the sector, we want to review those points today.

Being federally illegal creates undue burdens for cannabis operators, but it also allows them to build strong franchises. We discuss the negatives often, including onerous taxation (280E), inability to scale due to the lack of interstate commerce, lack of access to capital or reasonably-priced capital. A big part of this point is that American cannabis operators are excluded from major exchanges. A very simplistic view of legalization would conclude that with all of these going away, it could only be an improvement from the status quo. We remind readers that the status quo has been very good to the leading operators despite these challenges. Legalization could introduce new challenges, like regulation by the FDA. That hasn’t worked out well at all for the CBD industry since hemp was legalized in 2018. Additionally, a quick move to interstate commerce could lead to a lot of cultivation assets becoming worth a lot less overnight. We think that there will always be a need for locally grown, high quality flower, but the reality is that production will shift to large-scale producers. Another open question about federal legalization is potential international commerce. We suggest that investors may find certain aspects of the proposed legislation to be a potential threat to the status quo.

Change Will Likely Be Slow

When Canada legalized for adult-use in 2018, it followed a three-year process. Before this, the country already had in place a federal medical cannabis program. It seems likely that any changes in the U.S. could take at least that long, if not longer. A major issue is that the Democrats need 60 votes to pass in the Senate, so there would need to be substantial bipartisan support.

Several issues that we think could lead to a drawn out debate include the threat that interstate commerce might represent to states with mature adult-use programs, like Colorado, Oregon and Washington and even some of the newer ones, like Illinois and Michigan. Social equity is very likely to be a big part of the pending bill, and this could slow down the process. Taxation details could slow down the negotiations as well. Finally, what role the FDA might play is a potential roadblock to rapid approval.

The Democrats have opted for a comprehensive approach rather than going for the low-hanging fruit, a strategy that seems quite risky given that they control the Senate by the slimmest of majorities. We think that there will be bipartisan support for certain aspects, but it seems unlikely to us that the Senate will find 60 votes in this session to pass comprehensive legislation. Perhaps the process will yield a smaller victory if that is the case, like SAFE Banking, which has bipartisan support.

How the Market Could React

While we view federal legalization cautiously from the perspective of assessing cannabis stock investments, we think the market’s short-term reaction would be quite positive, perhaps queuing a run similar to the first few weeks of this year. During that rally as well as after the November elections, Canadian LPs and ancillary names that trade on higher exchanges in the U.S. benefitted disproportionately compared to the actual American cannabis operators, and this could certainly happen again. Two factors argue against an exact repeat of this “betting on the wrong stock” syndrome. First, and maybe we are giving retail investors too much credit, that last run didn’t end very well for the stocks that went up the most, and perhaps lessons were learned. More importantly, there was a wave of equity selling by MSOs in January that restrained the rally in our view. At this point, the companies appear to be in great shape with respect to their balance sheets, and we don’t see supply of stock as big of an issue today as it was earlier this year.

So, while federal legalization legislation that is about to be introduced could have both positive and negative long-term implications for investors, we think the short-term reaction is likely to be very positive as investors buy first and ask questions later. 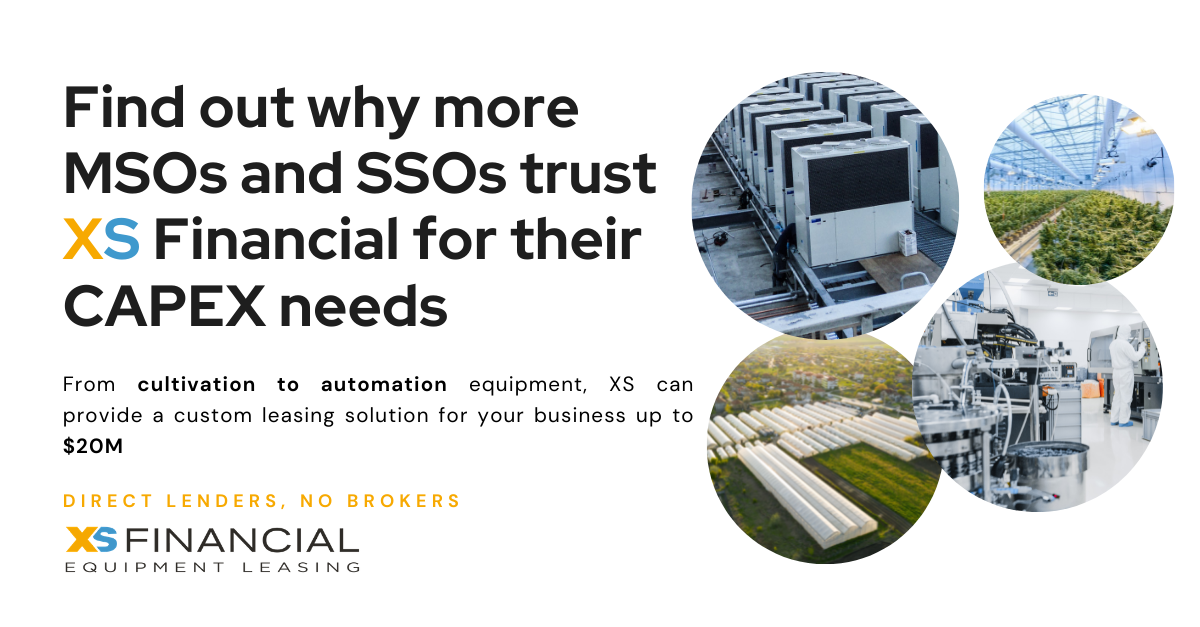 XS Financial provides the U.S. cannabis industry access to competitively priced, non-dilutive CAPEX financing solutions. Founded in 2017, the Company specializes in providing financing for equipment and other qualified capital expenditures to growing cannabis companies, including cultivators, processors, manufacturers, and testing laboratories. In addition, XSF has partnered with over 150 original equipment manufacturers (OEM) through its network of Preferred Vendor partnerships.