In August, we discussed how three companies, Canopy Growth, Tilray and Scotts Miracle-Gro, were looking to acquire American cannabis companies. Since then, all three companies have made moves. Tilray acquired convertible debt previously issued by MedMen to Gotham Green Partners that will allow it to acquire 21% of the company. Scotts Miracle-Gro invested through a new subsidiary, The Hawthorne Collective, in a $150 million convertible note that gives it a 42% stake in RIV Capital upon conversion. RIV Capital has indicated it will make its first investment by year-end. This investment is small relative to the company’s market cap, enterprise value and cash flow. This week, Canopy Growth, which pioneered cross-border investing that allowed it to retain its higher exchange listing, made another investment into the U.S., acquiring the right to buy Wana Brands in the future.

While we conceptually like the idea of locking up a brand, especially a very strong one like Wana Brands that we discussed five weeks ago as a leading cannabis brand, we think that Canopy and Tilray are pursuing a very risky strategy. In both cases, there is an immediate investment with the possibility of a zero return, as we discuss below. Both companies are struggling in Canada, losing market share according to data from Hifyre, and must find other ways to justify their still high market caps. International markets have been too slow to develop, so their focus is on buying an option to establish a position in the U.S. when possible to do so.

For Canopy, the transaction with Wana Brands, detailed thus far only by a press release, requires a $297.5 million cash payment. In exchange, they will buy the company at 15% of the future fair market value upon a “triggering event.” No financial details were provided regarding the current revenue or profitability of Wana Brands. While legalization would allow Canopy to exercise its option, there are other ways this could happen as well, including changes in listing rules that would permit them to retain their NASDAQ listing while operating in the THC market. In this case, with the option purchase, there is also a chance that Canopy could never be able to exercise its option, which would mean that the company just expended a large amount of cash with no near-term or long-term benefits. It has made other expenditures as well, buying an option to acquire Acreage Holdings in the future and a call option for a portion of TerrAscend.

By investing in a convertible note, Tilray could at least be repaid, but the company in which it invested, MedMen, has been struggling financially, though it did just receive a capital infusion. Tilray also used stock rather than cash to fund the $165.8 million note and warrant purchase. The deal struck us as quite odd, as the company has spoken about the importance of investing in brands, and, in this case, the focus is on a retailer rather than a branded product. With Acreage, Canopy is introducing its brands into the American market by allowing it to produce them on a royalty-free basis, but Tilray hasn’t disclosed this type of arrangement, which would have created some potential value by getting its brands into the American market ahead of changes in listing requirements or legalization.

Canopy Growth and Tilray aren’t alone among the larger Canadian LPs allocating capital on a contingent basis into the U.S., as Cronos Group in June announced an option to buy 10.5% of PharmaCann for $110.4 million. Aurora Cannabis, the only other Canadian LP with a market cap in excess of $1 billion, has taken no action, and its CEO downplayed the notion on the conference call in September, saying these investments made by peers have been premature and will hurt their profitability.

In contrast to Scotts Miracle-Gro, the three large Canadian LPs making contingent investments into the U.S. can’t as easily afford to make these investments because they do not have profitable underlying businesses. While Cronos Group is certainly in a better position financially given its large cash balance and lack of debt, we believe that Canopy Growth and Tilray could be in a position where they need to raise additional equity capital if they continue to aggressively spend capital in the U.S. In the case of Canopy Growth, recall that it borrowed US$750 million at LIBOR + 8.5% (9.5% floor) in March. 40% of this will be used to fund the Wana Brands option, which creates a very expensive cost of carry. At the end of its fiscal Q1, it reported C$2.05 billion in cash and short-term investments, but debt exceeds C$1.5 billion. The company will need to repay or refinance C$600 million debt in 21 months. In Q1, the company’s cash outflow from operations exceeded C$165 million. Almost all of its warrants and options are out-of-the-money, so there is no source of cash ahead. Canopy no longer has the strong balance sheet it did at the time Constellation infused it with C$5 billion three years ago, and the Wana Brands option purchase and continued use of cash to fund operations will likely leave it with debt in excess of cash by the end of December. 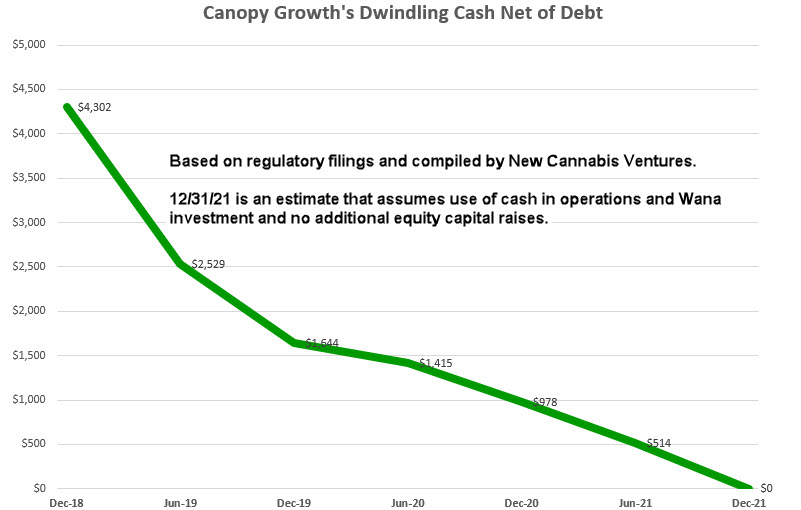 In the case of Tilray, the company has a stated goal of generating $4 billion revenue by 2024 contingent upon being able to recognize revenue from THC operations in the U.S. Specifically, CEO Simon suggested in a New Cannabis Ventures interview ahead of the MedMen note purchase that $1.5 billion of that revenue would be generated by U.S. cannabis operations. At this point, the company will have to do much more than tie up 21% of MedMen to hit that goal. To the extent the company uses its stock to make these contingent investments, it won’t have to issue stock in a public offering, but both processes will lead to substantial dilution ultimately, with very uncertain returns. Tilray’s balance sheet at the end of its fiscal Q1 showed $376 million in cash, but its debt exceeds $800 million, a high multiple of its adjusted EBITDA. The company used $93 million to fund its operations during the quarter.

Tilray and Canopy Growth, in our view, are taking risk by expending cash or issuing shares for assets that could prove to be worthless to them if laws or regulations don’t change. Further, there will be additional dilution ahead to take control of those assets if and when possible to do so. In the coming quarters, we expect that investors are going to be scrutinizing the balance sheets of these companies. Both are burdened by excess production capacity in Canada as well as unsustainably high levels of inventory. Contingent assets on the balance sheet won’t likely allay investor concerns about dwindling cash balances and maturing debt, and both Canopy Growth and Tilray are likely to see their share-counts rise without any offsetting benefits on the income statement if they continue to put capital into the U.S. We think that investors who believe that investing in the American cannabis industry is a good thing should invest in companies in the American cannabis industry rather than through Canopy Growth or Tilray.

Get up to speed by visiting the Charlotte’s Web Investor Dashboard that we maintain on their behalf as a client of New Cannabis Ventures. Click the blue Follow Company button in order to stay up to date with their progress.