For the past several years, specific events have driven cannabis stock prices most of the time. Some, like Constellation investing in Canopy Growth, have been surprises, while many have been scheduled. Some of those that stand out include Colorado legalizing at the beginning of 2014, the 2016 elections, California legalizing at the beginning of 2018 and Canada legalizing in October 2018. In all cases, these events proved to be buy-the-rumor and sell-the-news items.

With the exception of Canadian legalization, which was stunted horribly by having almost no retail stores initially, these catalysts failed to persist for stocks because there was no connection to the underlying companies. For example, when Colorado legalized, there were literally zero companies actually operating in the market. This was essentially the case with California as well.

This November, voters in New Jersey and South Dakota will definitely be voting on legalization, and voters in Arizona and Montana will likely be doing so as well. Unlike in the past, when election results or even legalization had no clear impact on specific companies, 2020 is quite different. We shared some background recently on New Jersey, which has six publicly traded MSOs operating. Further, several of these and additional MSOs are operating in nearby states that are likely to move forward with legalization through legislative action. So, a New Jersey election win would be a catalyst likely to persist.

Similarly, Arizona is a massive and relatively mature medical cannabis state. Like New Jersey, several public companies are operating in the state. BDSA data for May indicated that overall cannabis sales increased 58% to $93 million during the month. With 7.3 million residents, penetration in the state as of May was 3.3% (246K patients).

We are less than a month out from when the major MSOs begin reporting June financials, and we are expecting solid revenue growth and improved profitability ahead of the election catalyst. We expect that the elections, which include not only key state initiatives but also the potential to see Democrats take the Senate, which would likely be perceived positively for the sector, will help drive more persistent interest in the cannabis stocks. Unlike the past, investors will be able to see how the news will impact public companies directly rather than just the sector more generally, with potentially near-term positive impact. 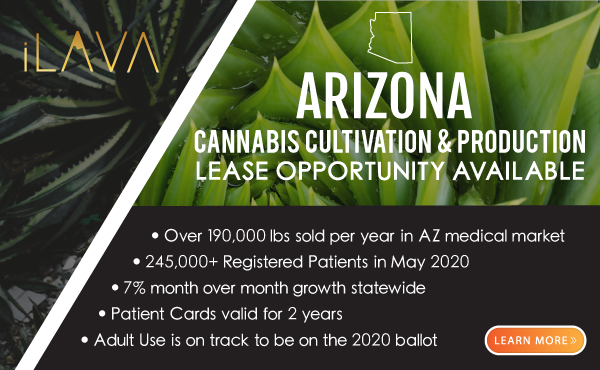 iLAVA of Arizona owns 100% of an unused cultivation and processing license and is requesting proposals for a financed operator with cultivation experience to enter one of America’s top cannabis markets. The company’s ideal partner shall be focused on quality control, compliance, and understand cannabis production operations. The Arizona medical marijuana program and upcoming adult use initiative do not limit cultivation canopy size or limit plant count. Click here to learn more.