44 companies currently qualify for inclusion, with 27 filing in U.S dollars and 17 in the Canadian currency, which is down from 46 when we reported near the end of March. Marimed (OTC: MRMD) and Village Farms (TSX: VFF) (NASDAQ: VFF) both were removed when their Q4 revenue fell below $7.5 million. Cronos Group (TSX: CRON) (NASDAQ: CRON) was removed from the list of companies reporting in Canadian currency, as it transitioned to U.S. GAAP accounting but failed to meet the minimum. Zenabis (TSX: ZENA) (OTC: ZBISF) qualified for inclusion following its Q4 report.

For companies that report in U.S. dollars, Harvest Health (CSE: HARV) (OTC: HRVSF), KushCo Holdings (OTC: KSHB) and Trulieve (CSE: TRUL) (OTC: TCNNF) have reported over the past three weeks. Trulieve, with the vast majority of its revenue derived from the Florida medical cannabis market, was able to retain its leadership after two of its rivals, which had reported earlier, had temporarily surpassed the company. Revenue grew 122% from a year ago during Q4, with the company also reporting over $28 million in adjusted operating income. While many companies don’t provide guidance or have withdrawn it, Trulieve reiterated guidance it had provided in May for 2020 revenue of $380-400 million with adjusted EBITDA of $140-160 million. Harvest Health & Recreation saw similar growth in Q4 revenue, which grew 123%, but the company generated an adjusted operating loss of $31.7 million. The company suggested that Q1 revenue growth will be consistent with the sequential growth rate reported in Q4. Kushco Holdings had pre-announced its fiscal Q2 revenue, which declined due to several factors detailed by the company in its press release and discussed more in depth on its conference call, including restructuring charges and inventory and receivables write-downs. 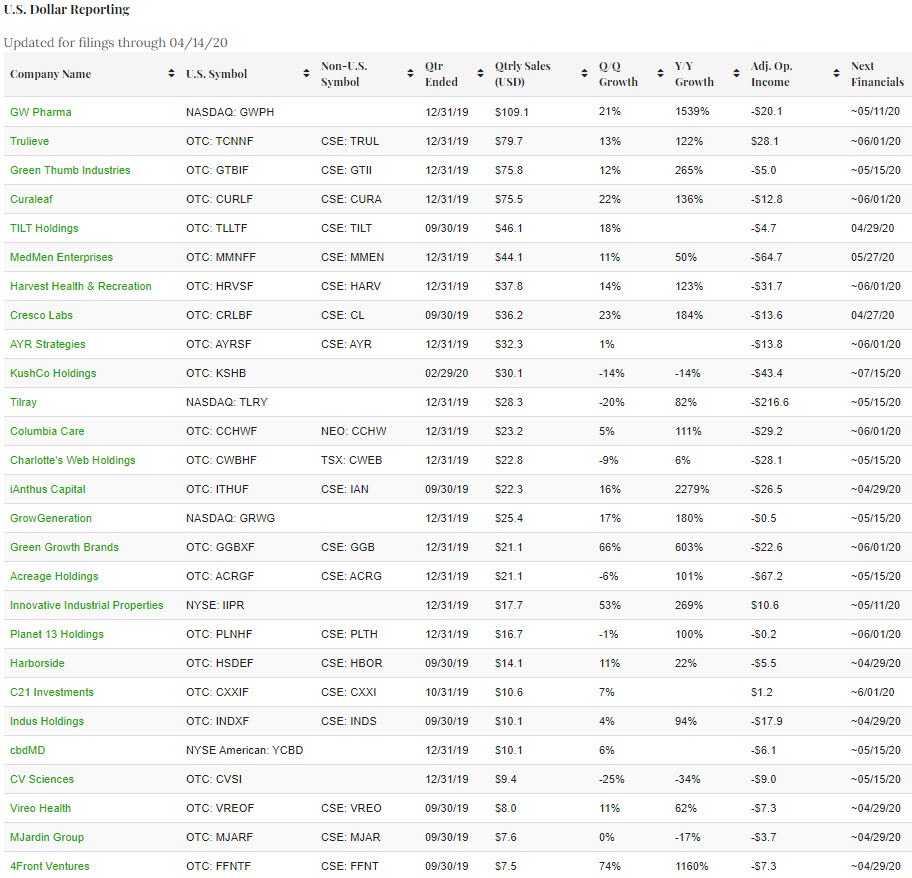 Over the balance of April, we are expecting many updates as the calendar 2019 reporting season comes to an end, but only two companies have scheduled calls, including Cresco Labs (CSE: CL) (OTC: CRLBF) and TILT Holdings (CSE: TILT) (OTC: TILTF). Analysts expect Cresco Labs, according to Sentieo, to have generated revenue of $45.3 million during Q4, up 25% from Q4 and 167% from a year ago. The quarter won’t include any revenue from Origin House, which was acquired in early 2020. TILT Holdings revenue is projected to be $47 million, up 2% from Q3 as the company was likely impacted during the quarter by the vaping crisis 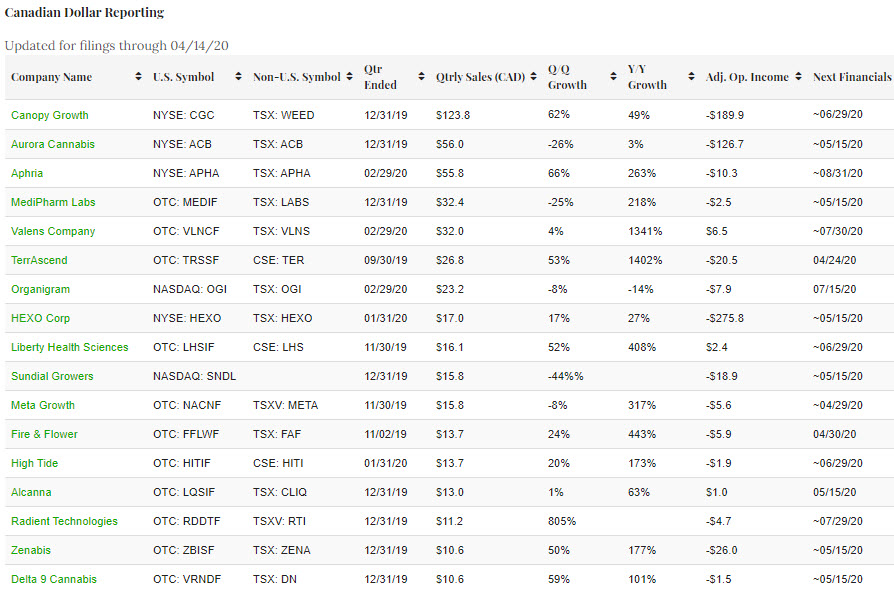 During the rest of April, we will receive updates from Fire & Flower (TSX: FAF) (OTC: FFLWF), Meta Growth (TSXV: META) (OTC: NACNF) and TerrAscend (CSE: TER) (OTC: TRSSF). TerrAscend will be reporting its Q4 financials on April 27th, with analysts projecting revenue of C$39.3 million, up 47% from Q3, according to Sentieo. Analysts project that Fire & Flower, which reports on the 30th, grew fiscal Q4 revenue modestly to C$14.25 million. Meta Growth hasn’t scheduled a conference call but is expected to have generated revenue of C$14.5 million, according to Sentieo, a decline sequentially from its fiscal Q1.

Visit the Public Cannabis Company Revenue Tracker to track and explore the complete list of qualifying companies. We have recently created a way for our readers to access our library of Revenue Tracker articles. For our readers who are interested in staying on top of scheduled earnings calls in the sector, we have have created and continually update the Cannabis Investor Earnings Conference Call Calendar. Finally, for many of these companies, we publish comprehensive earnings previews for subscribers at 420 Investor.