33 companies currently qualify for inclusion, with 22 filing in U.S dollars and 11 in the Canadian currency. Since our last report in in early May, we have added Columbia Care (NEO: CCHW) (OTC: COLXF), Halo Labs (NEO: HALO) (OTC: AGEEF), Innovative Industrial Properties (NYSE: IIPR) and Village Farms (TSX: VFF) (NASDAQ: VFF). We also removed MJardin Group (CSE: MJAR) (OTC: MJARF), which didn’t break out Q4 financials in its annual filings or MD&A, and Alcanna (TSX: CLIQ) (OTC: LQSIF), which fell just beneath the minimum required. We expect to add more companies in the coming months. We are not able to include Elixinol Global (ASX: EXL) (OTC: ELLXF) and Greenlane (NASDAQ: GNLN), which would otherwise qualify but don’t break out their cannabis-related revenue.

This month, we have begun to include an additional item, “Adjusting Operating Income”, as we detailed in our newsletter earlier today. The calculation takes the reported operating income and adjusts it for any changes in the fair value of biological assets required under IFRS accounting. We believe that this adjustment improves comparability for the companies across IFRS and GAAP accounting. We note that often operating income can include one-time items like stock compensation, inventory write-downs or public listing expenses, and we recommend that readers understand how these non-cash items can impact quarterly financials.

Of the companies that have shared financials in May and that report in U.S. dollars, GW Pharma (NASDAQ: GWPH) had the biggest change, as the company’s revenue of $39.2 million were fueled by sales of Epidiolex, pushing it to the top of the rankings as revenue grew 490% from the prior quarter and 1191% from a year ago. Tilray (NASDAQ: TLRY) cannabis sales of $17.0 million grew 9% over Q4, while CV Sciences (OTC: CVSI) saw a 5% sequential gain in revenue to $14.9 million. Note that we exclude revenue for Tilray from its recently acquired hemp food operations. GrowGeneration (OTC: GRWG), which boosted its annual guidance following Q1, saw revenue of $13.1 million increase 44% over Q4 and almost triple from a year ago. Columbia Care, which just began trading publicly, reported revenue of $12.9 million, up 45% from a year ago. Innovative Industrial Properties saw revenue growth of 147% in Q1 to $6.8 million. Terra Tech (OTC: TRTC) cannabis revenue fell 7% from a year ago to $6.8 million. Finally, Village Farms, which owns half of the Pure Sunfarms JV, reported its share of revenue at $5.4 million. 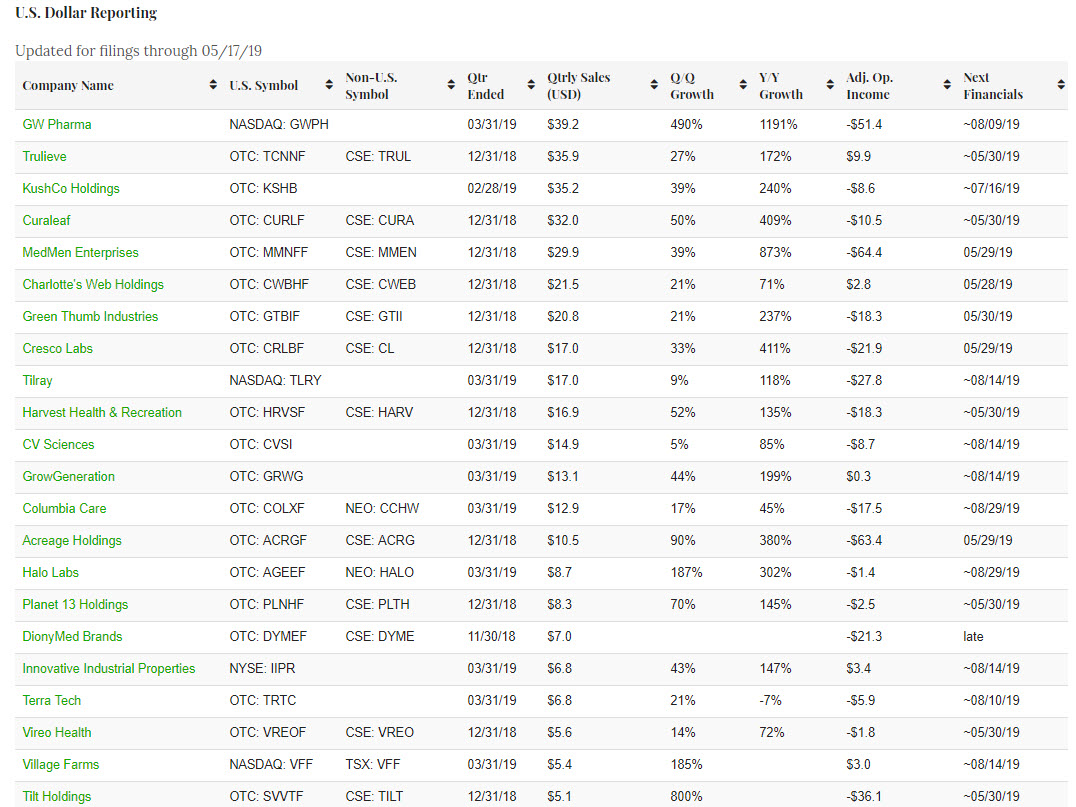 The last week of May will be quite busy, with many companies filing quarterly reports, including, among the largest revenue-generators, Trulieve (CSE: TRUL) (OTC: TCNNF), Curaleaf (CSE: CURA) (OTC: CURLF), MedMen Enterprises (CSE: MMEN) (OTC: MMNFF), Charlotte’s Web (CSE: CWEB) (OTC: CWBHF), Green Thumb Industries (CSE: GTII) (OTC: GTBIF),  Cresco Labs (CSE: CL) (OTC: CRLBF), Harvest Health & Recreation (CSE: HARV) (OTC: HRVSF) and Acreage Holdings (CSE: ACRG) (OTC: ACRGF). MedMen, which has scheduled a call for May 29th, has already pre-announced Q3 sales of US$36.6 million. Other companies with scheduled calls include  Acreage Holdings, Charlotte’s Web, Cresco Labs, GTI and MJardin Group (CSE: MJAR) (OTC: MJARF), which we expect to return to the rankings. According to Sentieo, Trulieve revenue for Q1 is expected to be $43 million, which would allow it to return to the top of the rankings.

During the rest of May, we expect to see results from Origin House (CSE: OH) (OTC: ORHOF). The company, which is in the process of merging with Cresco Labs, pre-announced Q1 revenue of C$11 million.  Canopy Growth (TSX: WEED) (NYSE: CGC), which has a March fiscal year-end, has indicated it expects to report its Q4 in mid-June.