On December 16th, Aphria (TSX: APHA) (NASDAQ: APHA) and Tilray (NASDAQ: TLRY) announced a pending stock-based merger. On Friday after the markets closed, Tilray filed a joint preliminary proxy statement which provided the details of the transaction ahead of the unscheduled special meetings of shareholders of each company to vote on the merger.

In addition to explaining the strategic rationale, the filing provided a detailed timeline of the transaction. As Aphria CEO Irwin Simon had indicated on the conference call the companies held when they announced the deal, this transaction was the culmination of 14 months of extensive conversations and negotiations. It turns out to have been quite the negotiation!

In October 2019, an investment banker reached out to Tilray to determine if the company would be willing to meet with Simon in New York. Ultimately, director Michael Auerbach and Chief Corporate Development Officer Andrew Pucher did so on November 22nd. In January, at the Benzinga Cannabis Capital Conference in Miami, Simon and Tilray CEO Brendan Kennedy discussed the strategic merits of merging the two companies. Aphria engaged Jefferies as its investment bank later that month, and Tilray engaged Cowen.

On February 14th, Tilray proposed an all-stock merger, where Tilray shareholders would own 56% of the combined company, with Kennedy serving as CEO and Simon as Executive Chairman and the Board of Directors split equally. Three days later, Aphria countered with a proposal that Tilray’s ownership stake would be 55%. In March, after COVID-19 emerged as a global pandemic, Simon suggested pausing. On March 25th, Kennedy proposed a revision of the ownership to 50/50. The two companies proceeded their discussions on these terms and continued discussions into May, at which point they put the discussions on hold for approximately 30 days. The companies held discussions subsequently, but made no substantive progress.

On July 13th, Simon informed his Board of Directors “that a third party (“Company A”) had contacted Aphria and proposed engaging in exploratory discussions regarding a potential strategic alliance or business combination.” On August 17th, Simon disclosed that it had engaged in conversations with other strategic parties, and the two companies reengaged over the next several weeks, with site tours and discussions.

On September 13th, Company A submitted a non-binding term sheet to Aphria regarding a combination of the two companies. Discussions continued between Company A and Aphria between September 18th and October 23rd.

On September 15th, Simon revised the draft term sheet with Tilray, proposing a 62.5% ownership for Aphria shareholders. Aphria also insisted that $200 million of its convertible debt be exchanged for equity. On September 17th, Tilray countered with a 58/42 split and $150 million of debt exchange.

On September 18th, following a presentation from Jefferies, the Aphria Board concluded that Company A’s proposal was inferior to combining with Tilray and also acquiring SweetWater. On September 23rd, Aphria revised its counterproposal to 61% ownership for Aphria and $200 million of debt exchange. On September 26th, Tilray revised its counterproposal to 60% ownership by Aphria and agreed to $200 million debt exchanged. The companies agreed on October 12th to these terms on a non-binding basis as they continued to work towards a definitive agreement.

On October 24th, the Aphria Transaction Advisory Committee met to discuss the proposal from Company A, noting that the suitor’s share price had increased significantly. It recommended to the Board that it pursue SweetWater and Tilray rather than merge with Company A. The Board informed Company A on the 25th of its decision.

On November 2nd, Simon informed Tilray that it would focus initially and exclusively on closing SweetWater and would cease discussions until that acquisition closed. In early December, the two companies reengaged and Simon proposed a 64/36 split on December 11th. Over the weekend of the 12th and 13th, the companies agreed to the 62/38 split, resulting in the deal being announced on the 16th.

The big question is who is Company A? Based on the facts presented, it appears it was likely Canopy Growth (TSX: WEED) (NASDAQ: WEED). The non-binding proposal, according to the filing, was stock-based, and the Aphria Transaction Advisory Committee expressed concern that the stock of Company A had run up substantially. Canopy Growth’s price appreciated by 22% between September 11th through October 23rd, while Aphria’s increased only 1%: 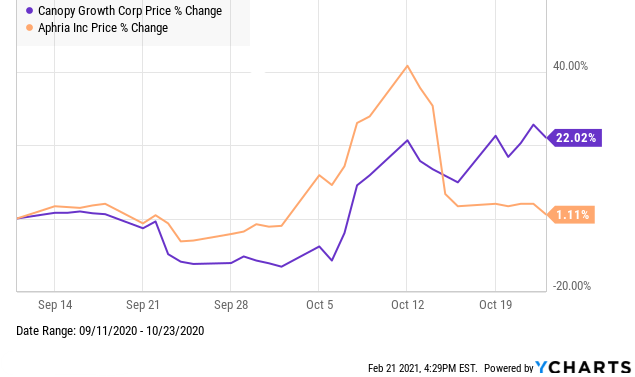 While it’s possible the suitor was another company, it’s very unlikely unless it wasn’t a Canadian LP, as there are no other LPs that had the financial ability to acquire Aphria except perhaps Cronos Group (TSX: CRON) (NASDAQ: CRON), which went up in price only marginally over this time-frame. Additionally, it would have been inconsistent with the strategy of the company. There were rumors last year that Aphria and Aurora Cannabis (TSX: ACB) (NYSE: ACB) might merge, but it certainly wasn’t Aurora, as its price plunged during the time-frame discussed.