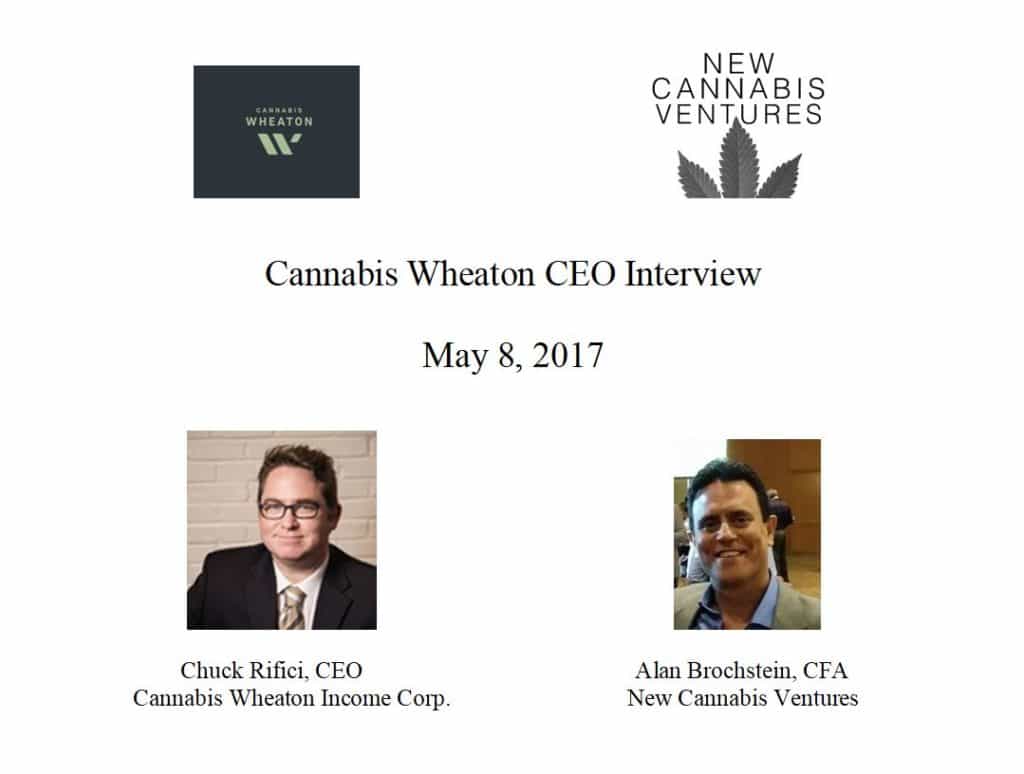 With Canada potentially facing a substantial undersupply of cannabis product next year as the market becomes legal for adults, licensed producers are rapidly adding capacity to meet expected demand. A new business model designed to bridge the capacity shortage by providing capital and operational expertise has emerged over the past two weeks, “streaming”, which infuses capital into a company in exchange for a stream of revenue from production in the future. Canopy Growth (TSX: WEED) (OTC: TWMJF) announced its Canopy Rivers venture in late April, and Cannabis Wheaton  (TSXV: CBW) (OTC: KWFLF) went public with details of its activities to date on May 1st and changed trading tickers on May 8th. A third company, Green Streaming, announced a deal last week with Maricann (CSE: MARI) (OTC: MRRCF).

Chuck Rifici, co-founder and former CEO of Tweed, is the Chairman and CEO of Cannabis Wheaton, and he explained his company’s business model and the problems it is trying to address. Rifici discussed not only the capital aspect but also the additional benefits he expects the fourteen signed partners of Cannabis Wheaton to receive, including operational expertise and distribution, by being part of his “LP 2.0” platform.

Here is the complete twenty-five minute audio interview, with a summary included below:

Rifici began by discussing his background, including his recent work with Nesta Holding, his private equity firm, as well as National Access Cannabis, where he is Chairman of the patient education center chain that he expects to trade publicly in later this year. He also explained his departure as a director from the board of directors of both Aurora Cannabis (TSXV: ACB) (OTC: ACBFF) and Supreme Pharmaceuticals (CSE: SL) (OTC: SPRWF) as being entirely related to potential conflicts of interest with Cannabis Wheaton, explaining that he remains a large and friendly shareholder in both companies and isn’t in competition with them.

The genesis of Cannabis Wheaton was about a year ago, but Rifici began to refine the model in late 2016. He explained that the concept was developed in the mining industry and pointed to Silver Wheaton (NYSE: SLW) as the best example, though cannabis is different than metals because it isn’t a commodity and is subject to federal regulation. The company will provide investment for capacity expansion in exchange for equity and access to future production but also delivers expertise through its team that helps reduce operational risk.

The company has done 16 deals with 14 companies so far, including LPs Broken Coast, Evergreen Medicinals, Green Relief and United Greeneries, a subsidiary of Harvest One Cannabis (TSXV: HVST) (OTC: HRVOF). The other 10 companies are at various stages of the application process. Rifici pointed to a big change at Health Canada, which has been reaching out to late-stage applicants to schedule inspections, echoing the urgency of adding capacity. Cannabis Wheaton thinks that the capital and expertise it provides can help get the additional capacity online quicker.

Perhaps the most interesting part of the story is how it might impact distribution. Cannabis Wheaton expects to be able to help in many ways on this front, as it is incentivized to do so due to its streaming costs that benefit from lower costs of production and its equity investment. Rifici pointed to the ability to balance the load between partners with too much supply or too much demand. Finally, he explained that in some provinces, where there is a central buyer (Ontario, for example) or limited number of buyers (Alberta, for example), Cannabis Wheaton will be able to help smaller producers get shelf-space.

Rifici was unable to provide comment about share structure or pending capital raises being undertaken by Cannabis Wheaton.

“Cannabis streaming” is a new concept that could have a big impact on the Canadian cannabis industry. While three companies have gone public with their involvement, we are hearing of others entering as well. The bottom-line is that Canada faces a potential shortage of capacity to meet demand in the early days of legalization next year, and the streaming model may help address the challenge by providing capital and operational expertise to early-stage licensed producers and late-stage applicants, extending upon the efforts of the more developed LPs who have raised capital and are adding to their own capacity.

Why MSOs Are the Gift That Is Likely to Keep Giving