As we reflect on what has been a year of remarkable advancement for the American cannabis industry, we recall our optimism heading into the year, when we suggested that “revenue growth and likely improved profitability will help broaden the investor base for leading MSOs.” Indeed, this was certainly the case, as American multi-state operators (MSOs) experienced strong growth during the year, leading to increased interest in the sub-sector.

There are now 9 MSOs that have market caps in excess of $1 billion. When we discussed the leading MSOs a year ago, there were just 4 that had attained that level. The price returns for these largest MSOs has been exceptional: 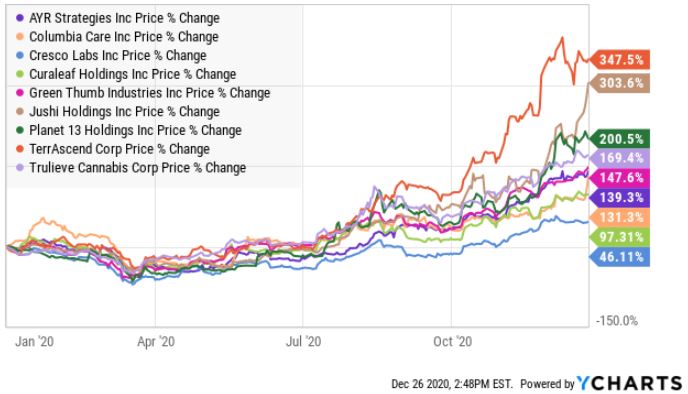 The pandemic had the potential to have wiped out the American cannabis operators, who entered the year struggling with access to capital following the vaping crisis late in 2019, but, instead, it created opportunities for those operators that were able to do so to serve their customers in different ways than before, including delivery and curbside pickup. With e-commerce aided by some new ways to process non-cash transactions, legal cannabis operators were able to compete better with the illicit market by offering convenience.

The growth in 2020 was astounding. New markets opening, like Illinois, were important, but it was the acceleration of growth in even some of the more mature markets that helped drive overall gains. Demand during the pandemic certainly increased. The 9 leading MSOs by market cap generated year-over-year revenue growth during Q3 ranging from 36% to as high as 594%, with an average of 180%: 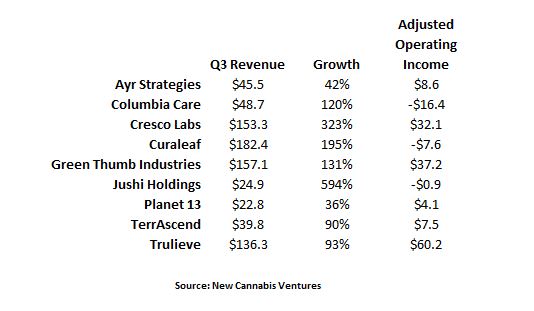 Note that for TerrAscend, we have converted their revenue and adjusted operating income from Canadian dollars. Each MSO has different factors impacting its growth rate, including the markets in which it operates as well as whether or not the company had acquisitions over the past year that contributed to growth. Improved profitability was an even bigger story in 2020, as the MSOs were able to leverage their cost structure as they grew. Our adjusted operating income calculation, which removes any impact from changes in the fair value of biological assets, was positive for 6 of the 9.  A year ago, only Trulieve was profitable at $23.4 million during Q3. Keep up to date with these changes by bookmarking the Public Cannabis Company Revenue & Income Tracker.

As the cannabis industry enters 2021, the outlook remains robust. In addition to the newly legal for adult-use markets of Arizona and New Jersey rolling out this year, Virginia’s medical program has just launched. Many of the fastest-growing markets, like Illinois and Pennsylvania, remain undersupplied. The 9 largest MSOs by market cap are expected to see substantial growth in revenue and adjusted EBITDA in the year ahead: 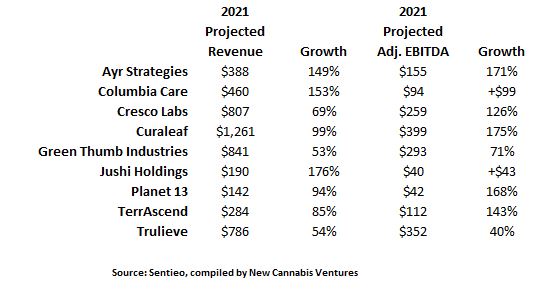 We have adjusted the TerrAscend numbers from Canadian dollars here as well. The average expected revenue growth rate is 104% in the year ahead. Note that several of these companies have pending acquisitions that are excluded from the outlook. While this table and our discussion have been limited to the largest MSOs, we expect that there is an increasing number of smaller MSOs that will experience strong growth as well.

When it comes to investing, it’s essential to understand what is priced in. We have seen in the past much higher valuations for Canadian LPs who, at the time, were not profitable and weren’t generating revenue anywhere close to the current run-rate for the leading MSOs. We don’t believe, though, that those historical benchmarks are useful. Investors are no longer required to rely upon the unpredictable further out years to assess the valuations. As we look across the leading MSOs and smaller ones as well, we believe the prices at which they are trading are reasonable.

Investors are able to assess recent revenue or profitability or look to 2021 or 2022 analyst estimates to assess valuations. Most of the capital structures are not complex, allowing investors to use traditional valuation metrics, though we note that investors have to incorporate how much longer 280E taxation will be in effect if using metrics based on net income.

As a proxy for the group, we think GTI demonstrates the reasonableness of sector valuations. An unnamed institutional investor recently bought additional shares at a substantially higher price than its initial purchase, validating our view that current valuations are reasonable. In the case of GTI, the stock has a market cap of $5.4 billion. Adding in its small amount of debt and ignoring cash gives it an enterprise value of $5.5 billion, which is 6.5X projected 2021 revenue and 18.8X projected adjusted EBITDA. With revenue expected to increase 22% in 2022, we find these multiples to be fair.

While analysts are notoriously overly optimistic, and their estimates could certainly end up being too high to a degree, we noted last week that M&A is likely to accelerate in 2021 (we should have said starting in two days!). We think that the transactions announced by Ayr Strategies and Columbia Care illustrate how the largest MSOs who have earned the trust of investors may be able to significantly boost their top-line in 2021 and beyond through accretive acquisitions.

What Could Go Wrong

The momentum the MSOs are experiencing is likely to persist, but there are several potential developments that could weigh on their outlook in the year ahead. One of the biggest risks we envision is that supply could move into balance with demand in certain states more quickly than the market is anticipating. Most MSOs don’t break out revenue or profitability by market, so trying to stay on top of the dynamics within each market is challenging. Even if an individual market becomes so competitive that margins decline, the lack of interstate commerce would minimize the impact across the sector. Further, as new markets open, any potential loss of profitability would likely be offset.

Another concern of ours is that states may become less friendly to the incumbents as they legalize. Historically, legalization for adult-use has benefited the incumbent medical providers rather substantially. Illinois earlier this year and Arizona and New Jersey next year are good examples of the advantages conferred to incumbents. With that said, the governor of Pennsylvania, an ardent supporter of adult-use, floated the idea of the state-run liquor stores serving as the retailers should the state legalize for adult-use. In Rhode Island, the governor has proposed that the state actually run its program rather than just regulate it.

The final risk-factor we see is that the federal government could move too quickly on the regulatory front, though we expect that this is a very unlikely scenario that probably requires the Democrats to take the Senate next month. President-elect Biden campaigned on the idea of federally legal medical cannabis, something that could look very different than the current state-legal system, with regulation by the FDA perhaps and new producers and retailers able to enter. If the federal government moves to permit interstate commerce quickly, many of the MSOs will be locked into expensive sale-leasebacks on what could become obsolete assets. We continue to expect any sort of federal policy changes to be gradual rather than sudden. Even if we are wrong, there are scenarios that would lead to existing operators being acquired by new entrants, offsetting some of the potential competitive threat.

While our focus this week is on what appears to be a promising year ahead for the American MSOs, our optimism certainly extends beyond this sub-sector. In particular, we have pointed to the rapidly growing Canadian adult-use market, and the Canadian retailers and several small LPs, as we discussed two weeks ago, are poised to benefit. Another sub-sector that is likely to excite investors is the ancillary space, which continues to be underappreciated in our view. Six months ago, we highlighted the ancillary sub-sector and suggested that more companies would go public, including Hydrofarm, which did so. In early 2021, WeedMaps is likely to complete its go-public transaction by merging with SPAC Silver Spike. We believe that there are some attractively priced stocks in the ancillary sub-sector.

Tying It All Up

In May, we came to the conclusion that a new bull market for cannabis stocks had begun in March, describing the beginning of the third wave of cannabis investing. We think that we are still early in the process and are encouraged that institutional investors are beginning to embrace the sector. We have discussed our expectation that the relatively new AdvisorShares Pure U.S. Cannabis ETF is likely to expand MSO investment, and we remain hopeful that Congress will take action to enable MSOs to begin trading on higher exchanges. There are several states on the East Coast that could move to legalize this year for adult-use, which could boost sentiment further. With strong growth likely ahead and valuations that appear reasonable, the rally in MSOs looks to be sustainable.

However the year plays out, we look forward to continuing to help our readers stay on top of the developments ahead. We wish you and your families a health and prosperous 2021!

1906 has innovated across R&D, manufacturing and marketing with breakthrough products that combine moderately-dosed THC with medicinal plants and adaptogens. User-friendly, portable and thoughtfully engineered, they deliver curated effects within 20 minutes. The rapid-onset formulations help users get the most out of their days and nights while staying pleasantly in control.

To learn more about cannabis brand 1906, a client of New Cannabis Ventures, visit the company’s page that we maintain on its behalf and click Get More Info.