24 companies currently qualify for inclusion, with 12 filing in U.S dollars and 12 in the Canadian currency. Since our last report, we added two, including Planet 13 Holdings (CSE: PLTH) (OTC: PLNHF) and CannaRoyalty (CSE: CRZ) (OTC: CNNRF). We note that two companies likely qualify but can’t be included at this time due to their not providing quarterly data yet, Cannex Capital (CSE: CNNX) (OTC: CNXXF) and Elixinol Global (ASX: EXL) (OTC: ELLXF).

Several companies filing in U.S. dollars reported in the back half of August, including  Green Thumb Industries (CSE: GTII) (OTC: GTBIF), Tilray (NASDAQ: TLRY), Planet 13 Holdings and Golden Leaf Holdings (CSE: GLH) (OTC: GLDFF). Green Thumb recaptured the top spot with impressive Q2 sales of $13.6 million, up 291% from a year ago. On the conference call, the company described same-store-sales growth as 51%. Tilray posted Q2 sales of $9.7 million, which represented 95% growth and was ahead of its own projections that it shared in the IPO prospectus of $8.8-9.2 million. Planet 13, which operates a dispensary, MediZen, in Las Vegas, posted sales of $4.4 million, up over 200% from a year ago. Golden Leaf saw Q2 sales growth accelerate as it added Nevada wholesale revenue and Canadian consulting revenue into the mix, though Oregon wholesale and retail sales still accounted for 85% of overall revenue of $3.7 million. 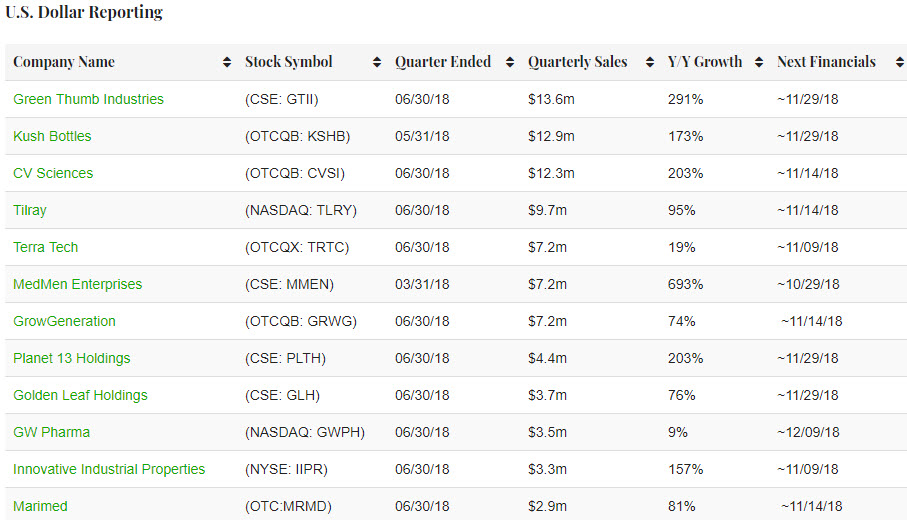 None of these companies will be reporting in the month of September. MedMen Enterprises (CSE: MMEN) (OTC: MMNFF) is expected to report in October and shared some preliminary guidance about system-wide revenue for its fiscal Q4 ending June 30th earlier this month.

Of the Canadian companies that report in Canadian dollars, MPX Bioceutical  (CSE: MPX) (OTC: MPXEF), Sunniva (CSE: SNN) (OTC: SNNVF) and CannaRoyalty shared updates in the last week of August. MPX sales of C$14.5 million, primarily from its Arizona operations, exceeded the consensus forecast of C$12.5 million and represented growth of 224%. Sunniva saw its sales decline for the second straight quarter, with annual growth slowing to 36% as the company saw a large sequential decline in its vaporizer business due to seasonal ordering patterns. CannaRoyalty joined the group with sales of C$3.5 million but also reported a substantial net income that included gains associated with the sales of two investments, which were marked up on their balance sheet. 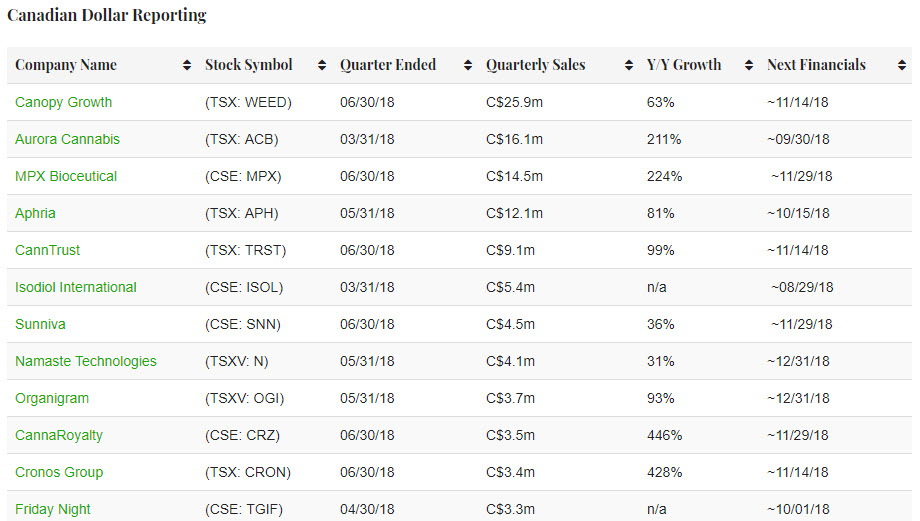 The only report expected in September is from Aurora Cannabis (TSX: ACB) (OTC: ACBFF). The June financials will not include results from the MedReleaf acquisition. According to Sentieo, the company is expected to generate sales of C$23 million in the quarter ending June 30th, which would reflect annual growth of 288% and quarterly growth of 43%. It’s not clear when Isodiol International (CSE: ISOL) (OTC: ISOLF) will report. Its filings for its fiscal Q1 were due on 8/29, but the company had an issue with its accounting that requires it to restate its annual financials for the year ending 3/31/18 and hired a new CFO earlier this week. The company’s shares have been halted by the Canadian Securities Exchange.