The Public Cannabis Company Revenue Tracker, managed by New Cannabis Ventures, ranks the top revenue producing cannabis stocks that generate industry sales of more than US$2.5 million per quarter. This data-driven, fact-based tracker will continually update based on new financial filings so that readers can stay up to date. Companies must file with the SEC or SEDAR to be considered for inclusion. Please note that we plan to raise the minimum quarterly revenue in May to US$5 million.

44 companies currently qualify for inclusion, with 27 filing in U.S dollars and 17 in the Canadian currency. Since our last report in mid-March, we have removed Surna (OTC: SRNA) and have added United Cannabis (OTC: CNAB).  We expect to add several companies in the coming months, including TILT Holdings (CSE: TILT) (OTC: TILTF), which announced very strong January pro forma revenue and is likely to qualify for its Q4, which should be reported in April.

In late March,  Charlotte’s Web (CSE: CWEB) (OTC: CWBHF), Curaleaf Holdings (CSE: CURA) (OTC: CURLF), Tilray (NASDAQ: TLRY) and United Cannabis reported their Q4 financials. Charlotte’s Web saw sales jump 21% from Q3. Curaleaf moved to the top spot with its $32 million quarter. The company reaffirmed its outlook for $400 million in revenue in 2019. Tilray revenue was ahead of expectations, growing 55% from the prior quarter, but their margins were pressured. United Cannabis made the list for the first time after generating $3 million in sales of CBD products derived from industrial hemp. 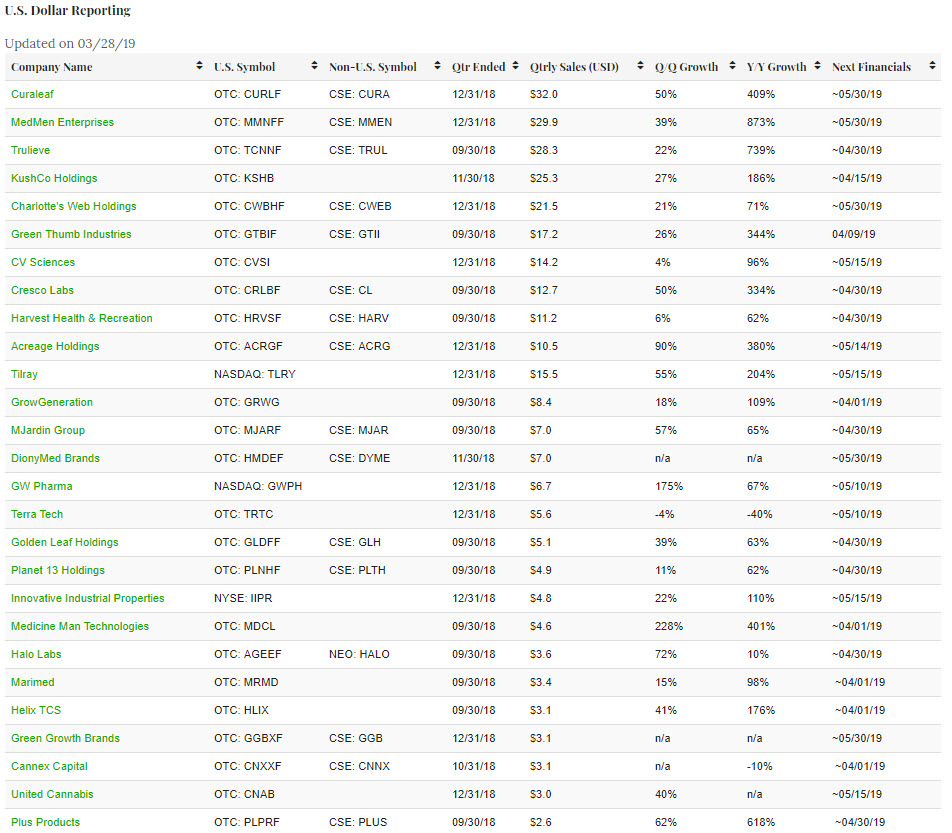 Of the companies that report in Canadian dollars, CannTrust (TSX: TRST) (NYSE: CTST) and Cronos Group (TSX: CRON) (NASDAQ: CRON) reported just last week, with both companies disappointing the market with sales that fell below expectations.