This is a copy of the September 16th edition of our weekly Newsletter, which we have been publishing since October, 2015.

One of the most frustrating aspects of being a close observer of the cannabis industry for more than five years has been watching the total lack of progress towards regulatory reform at the federal level. We have seen several pieces of legislation that address important issues be introduced but then die. Our industry has been conditioned to be joyous when the budget process results in the DEA being prevented from spending money to enforce policy for just the next year and to be hopeful that we won’t see any sort of hardening of policies. For the first time, though, change may be on the horizon.

This week, the House Judiciary Committee met to discuss the Medical Cannabis Research Act (H.R. 5634) , sponsored by Matt Gaetz (R-FL) with 23 Democrats and 19 Republicans cosponsoring it. The legislation would compel the DEA to end the monopoly held by the University of Mississippi on the production of medical cannabis for research with the addition of at least two other manufacturers. The end result was that the Bill will advance to the floor of the House, which in and of itself is truly historic, though it followed a very thoughtful debate about some of the language regarding a restriction that would prevent those with any drug-related misdemeanor from working at any approved organization.

Whether or not this baby step comes to fruition, as it should, what is very clear is that both sides of the aisle want to reduce some of the roadblocks for the industry. We encourage our readers to listen to just a portion of the one-hour long discussion. The key takeaway for investors and operators should be that the federal government appears to be ready to begin addressing some key issues. It has to start somewhere, and the inability to conduct research has been a huge barrier to our industry’s progress, as we need to go beyond the ample anecdotal evidence about the safety and efficacy of cannabis. The successful clinical trials of GW Pharma and the subsequent approval of Epidiolex highlight the opportunity to use science to justify making medical cannabis an option to patients. Of course, there are other roadblocks, like taxation and limitations on banking.

One of the biggest stories this year was the apparent deal between Senator Gardner of Colorado and President Trump that could pave the way for states to be able to regulate cannabis without federal interference, a move that provoked a substantial shift in the sentiment of investors and operators just a few months after Attorney General Sessions ripped up the Cole Memo and instilled fear that the industry might regress. Gardner and Senator Warren introduced the STATES Act this summer, though it’s not clear yet that it will move forward anytime soon.

Since April, we have seen a tremendous amount of capital begin to flow into the U.S. cannabis industry, as investors have become more optimistic that the risks of a harder policy from the federal government are less likely, and we think that this milestone of seeing cannabis legislation head to the House floor solidifies this view. The industry’s upside potential is easy to see, but the downside risks have been harder to assess. We think that this small step forward will be seen as an inflection point in federal policy, especially if the Bill actually passes. Getting from where we are to full legalization is complex and will take many years in our view, but as long as investors see progress being made, we expect the flow of capital will remain robust.

Organigram Holdings recently reported record quarterly revenue and is well positioned for legalization in Canada, with supply agreements with the majority of provinces. The company’s fully funded capacity expansion is projected to yield 113 million grams by the end of 2019.

To learn more about Organigram, visit the company’s Investor Dashboard that we maintain on its behalf, click the blue Follow Company button in order to stay up to date with their progress.

New West Summit, in its 4th year, takes place in Oakland in mid-October. In addition to the three separate tracks of panel presentations, the event features once again presentations from a dozen leading public companies. NCV readers can save 50%on the admission price by using the code “NCV”. We hope to see you there! 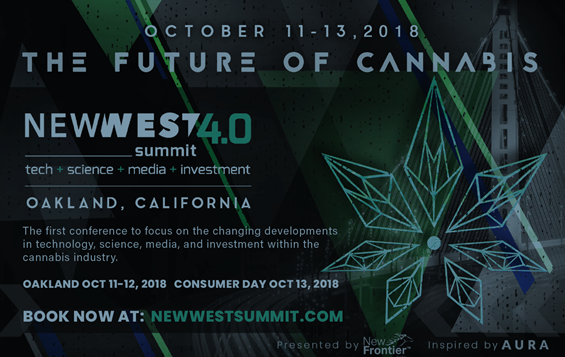