Despite a flood of supply this month, Canadian LP stock performance stands out so far in October as investors have retreated somewhat from the overall sector. The Cannabis Stock Index, which includes cannabis stocks from Australia, Canada and the United States, has declined 7.9%, but the average LP has increased 7.6% (in Canadian dollars). Here is the performance in October to date for each of the 23 publicly-traded LPs: 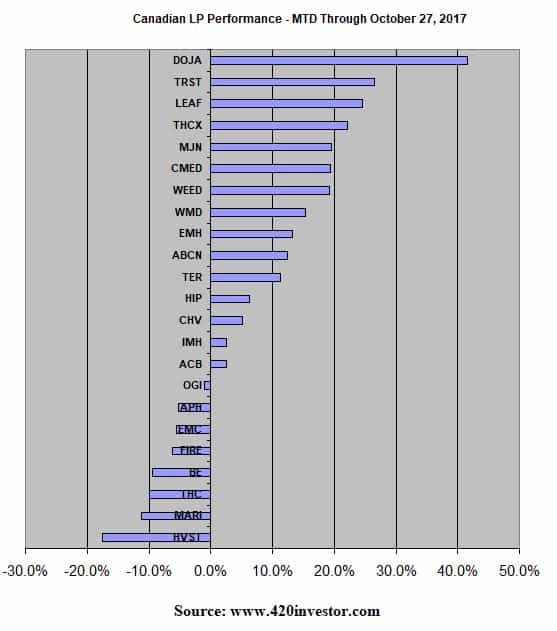 The majority of the 23 publicly-traded LPs weren’t trading at the end of 2016, but, for those that were, the returns have been healthy, averaging 13.7%: 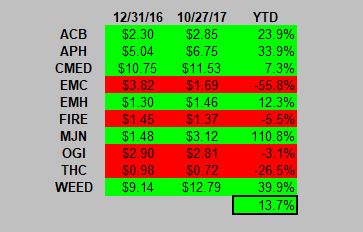 Returning to the recent performance, the market can be broken into three different segments based on the stage of development of the company, including market leaders, revenue generators and those approved to grow but not yet sell.

Six LPs have generated enough revenue to be counted among the leaders, as denoted on our Revenue Tracker, including (in order of sales) Canopy Growth (TSX: WEED) (OTC: TWMJF), MedReleaf  (TSX: LEAF) (OTC: MEDFF), Aphria (TSX: APH) (OTC: APHQF), Aurora Cannabis (TSX: ACB) (OTC: ACBFF), CanniMed Therapeutics (TSX: CMED) (OTC: CMMDF) and CannTrust (CSE: TRST) (OTC: CNTTF). The average return of 14.5% is substantially above the 7.6% overall average return for the sector, but the performance among this group hasn’t been uniform in October, as LEAF and TRST, both relatively new issues, have posted all-time highs and the highest gains, while APH and ACB, both of which have sold shares this month, have posted the lowest returns. APH was also impacted by the potential threat of delisting from the TSX due to its U.S. operations. 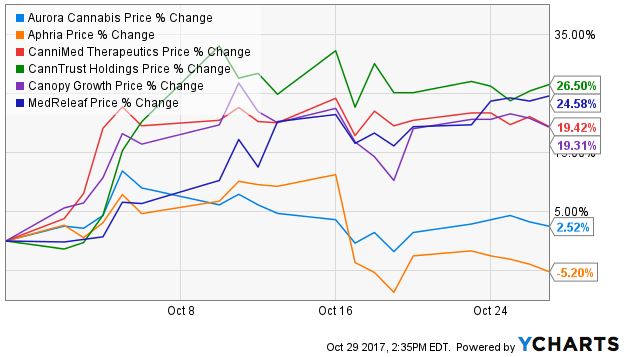 ACB, LEAF and WEED will all be reporting quarterly results in the next two weeks. LEAF has scheduled a call for Monday, November 13. TRST recently pre-announced its Q3 results that are due by the end of November. 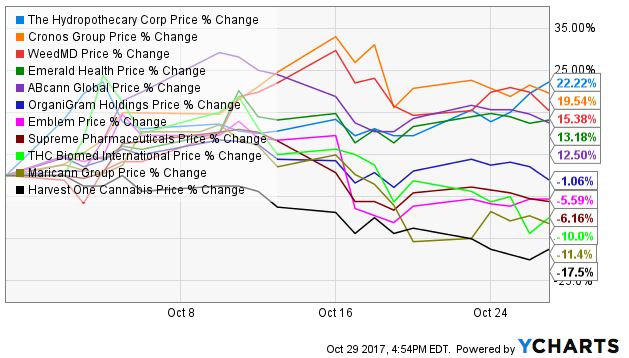 Approved to Grow Only 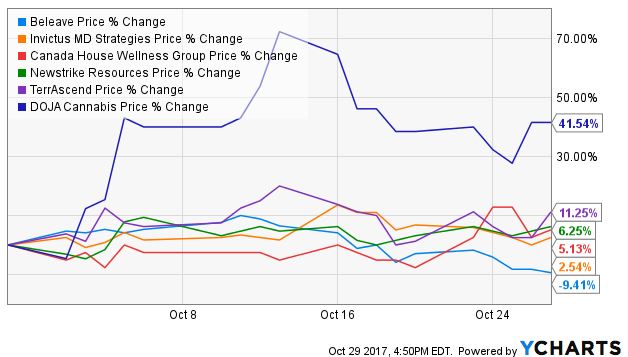 2017 has been a strong year for the Canadian LP sector, which has generally extended big gains from 2016. Despite some turbulence in the markets over the past few weeks as concerns have arisen regarding the involvement of one LP in U.S. cannabis operations and, more importantly, supply of shares, most stocks are showing gains in October, especially for the larger LPs in terms of market cap and revenues, continuing a rally for the sector that began in early June.

For any readers following the Canadian cannabis industry, we offer a resource page to help stay on top of it. Additionally, New Cannabis Ventures will be conducting a webinar with Bruce Linton, CEO of Canopy Growth, on Thursday at 1PM ET. Registration is free, and those who do so will receive a recording of the event when it concludes.