After a 54.9% gain in Q1, the Canadian Cannabis LP Index  has done a complete round-trip, with the index extending its losing streak to five months after declining in August by 11.2% to 703.05: 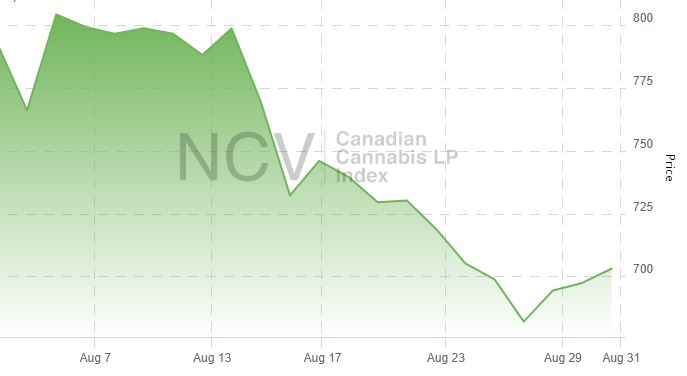 The index remains substantially below the all-time closing high of 1314.33 on September 25th, just ahead of Canadian legalization. It closed the month just 11.2% above the December bottom and is down 0.2% year-to-date:

Tier 3, which included the 36 LPs that generate cannabis-related quarterly sales less than C$2.5 million, declined 11.7%, leaving its year-to-date loss at -2.4% after declining 26.4% in 2018. 3 of the 7 companies in the entire sector that showed gains in the month were members of Tier 3 during August as the 6 worst performers. Green Organic Dutchman (TSX: TGOD) (OTC: TGODF) was a double-digit gainer, while Golden Leaf Holdings (CSE: GLH) (OTC: GLDFF), Flowr (TSXV: FLWR) (OTC: FLWPF) and Benchmark Botanics (CSE: BBT) (OTC: BHHKF) all declined more than 30%.

The returns for the overall sector varied greatly, with  seven names posting positive returns, while twelve declined by more than 20%, for a median return of -10.5%: 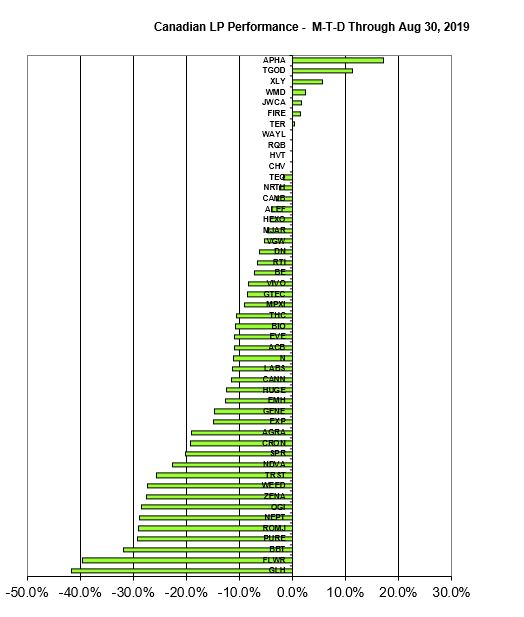 For August, the overall index will have 49 constituents again. One change is that Zenabis (TSX: ZENA) (OTC: ZBISF) will move from Tier 1 to Tier 2, as we had mistakenly included it in the highest tier by not excluding a large portion of its revenue as not related to cannabis. Readers should be aware that Sundial Growers (NASDAQ: SNDL) and Tilray (NASDAQ: TLRY), with no Canadian listings, is not eligible for inclusion in the index, which is denominated in Canadian dollars. Note that the cut-off date for making changes to the index was 7/29.